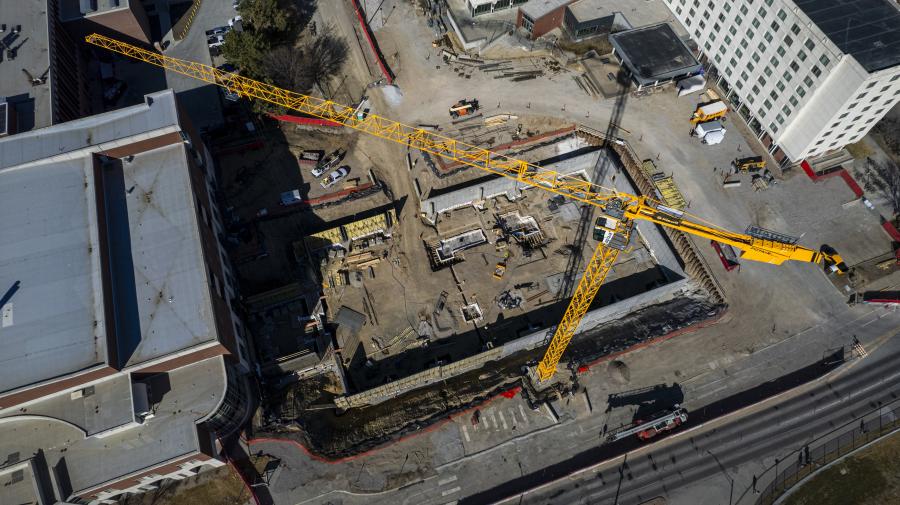 A construction crane is among the heavy equipment being used on the $115 million Kiewit Hall project job site. (University of Nebraska-Lincoln photo)

Due to a $25 million naming gift from Kiewit Corporation, along with donations from individuals, corporations and foundations, construction is well under way on an academic hub for undergraduate engineering education at the University of Nebraska-Lincoln (UNL). The $115 million Kiewit Hall project, the largest academic building effort in the University of Nebraska's history, will include classrooms, instructional labs and an outdoor plaza for the university community. It also will house Lincoln-based construction management programs.

A construction crane is among the heavy equipment being used on the job site. The project totals 182,080 sq. ft.

Preliminary work began in fall 2020, with an estimated completion date of 2023. Clark & Enersen and Ballinger were selected as architects for the project, while Kiewit serves as construction manager.

"In our company's earliest days, Peter Kiewit came to the University of Nebraska to find the engineers that made the company what it is today, and the university has remained incredibly important to us," said Rick Lanoha, Kiewit Corporation president and chief executive officer, quoted in a UNL news release highlighting the June groundbreaking. "When this opportunity came along to build this world-class facility, it was a unanimous vote at our board of directors meeting."

The facility is being built on the east side of UNL's existing engineering complex, east of Othmer Hall and across 17th Street, which is now closed to traffic. Kiewit Hall was designed to connect to Othmer Hall via a skyway. This allows for an expanded complex that also includes Scott Engineering Center, the Link and Nebraska Hall.

"It will help educate generations of engineers who will lead teams, who will use their engineering principles to solve practical and important issues and challenges, engineer other facilities like this and engineer infrastructures that will really help change lives and save lives in our communities," said Brian Hastings, president and CEO of the University of Nebraska Foundation. "Every project needs champions, and without our principal benefactors, this project wouldn't be a reality, but without the 734 individuals and organizations who have given so far, we wouldn't be here today."

The new Kiewit Hall is part of a $170 million expansion and facilities transformation for the College of Engineering. Scott Engineering Center is being renovated, as well as the new, not yet completed Link building that will feature enhanced spaces for research labs, graduate students and academic departments.

A groundbreaking ceremony for the project was held in June 2021. The event, detailed on the school's website, was held adjacent to the building site at 17th and Vine Streets at the College of Engineering in Othmer Hall.

"We are very excited about it. We know our students are going to build the future, and they're going to be more enabled to do that through this new facility."

"As someone who has spent my career at this university, I can't tell you how gratifying it is to see that kind of investment in the College of Engineering," said Dean Lance C. Pérez.

"What matters is what's going to happen in this building. For the first time in over a generation, we will have a facility that is all about teaching engineering. It's going to be a game-changer for the state of Nebraska and the next generations of students."

UNL offers the only College of Engineering in the state, providing engineering education and leadership in technology-based economic development for the state and beyond. CEG