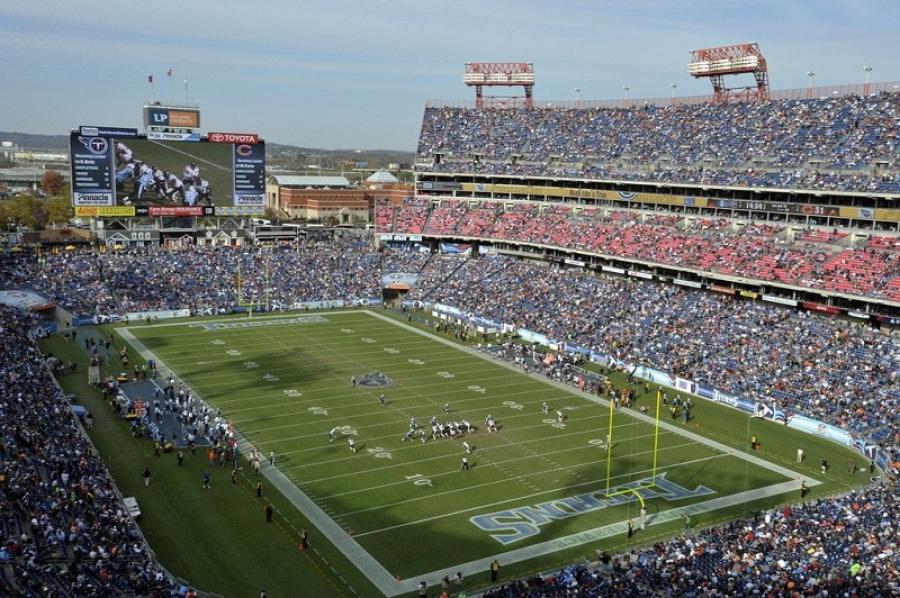 The NFL’s Tennessee Titans and Metro Nashville may scrap their plans to renovate the 23-year-old stadium, and instead build an entirely new home for the team on the east bank of the Cumberland River.

Negotiations for $600 million in upgrades to Nissan Stadium in Nashville have been paused as recent studies show extensive renovations are needed beyond what was expected, officials told the Tennessean.

The NFL's Tennessee Titans and Metro Nashville may scrap their plans to renovate the 23-year-old stadium, and instead build an entirely new home for the team on the east bank of the Cumberland River.

Instead of a $600 million renovation, the pro football team and the city are now discussing a new stadium with a price tag of at least $1.2 billion.

Metro and Titans officials have been planning a major redesign of the entire east bank for more than a year, across the river from downtown Nashville.

They envision a new neighborhood surrounding the Titans home with an entertainment district like Wrigleyville, near Chicago's Wrigley Field, home of Major League Baseball's Cubs.

Beyond that, more than 200 acres of land at the Nashville site is slated for redevelopment into a new neighborhood in place of an old industrial area mostly filled with surface parking lots.

Initial estimates that the stadium needed $600 million to be upgraded to a "world-class" facility on par with cities like Miami were farther off than expected.

"What we've discovered most recently is that the stadium has a lot more infrastructure needs than we originally anticipated," Titans spokesperson Kate Guerra told the Nashville news source. "For example, the stadium's structural frame was built with concrete and needs to be largely replaced with steel."

The added costs also include complete replacements of the mechanical, plumbing and electrical systems, she said.

The revelation caused the Titans to take a break from negotiations with Mayor John Cooper as they take a step back to think about their options.

"When you consider the present and future needs of our current stadium, it's possible that another path, such as a new, modern stadium that could better serve its community's needs, might be a more responsible option to explore," Guerra said.

Cooper said Metro and the Titans are "evaluating the costs and benefits of multiple scenarios for the future of Nissan Stadium."

"Revised cost estimates require us to closely review whether a new stadium would be a better long-term financial decision for Nashville," Cooper explained in a statement. "We won't settle for anything but the best-case scenario for [the city]."

Guerra said the Titans "remain committed to our original mission: find an elegant solution to upgrade the stadium to first-class, NFL-quality standards and remove Nashville's general fund from stadium business once and for all through a re-imagination our current lease structure, which as it stands today, puts the burden of an aging stadium's costs on the city and Nashville's general taxpayer."

Metro Council member Brett Withers, who serves District 6 where Nissan Stadium is located, said the possibility of investing in a new facility may be more cost-effective in the long run, given the way the current stadium was constructed and its advanced age.

"You are looking at either investing in a stadium that doesn't even meet today's standards, hope that you can renovate it somewhat, and have it last [another] 20 or 30 years, which seems unlikely, or take the same funds to build a new [facility], which would make more sense," he said.

A new stadium also could be constructed closer to Interstate 24, which Withers said is "really appropriate from a planning standpoint and helps us to build a better riverfront, particularly if we're adding residential [developments]."

Construction on Nissan Stadium began in 1997, before opening just in time for the 1999 NFL season. The cost, at that time, to build the stadium was $290 million, a fraction of what the outlay is now for new NFL arenas.

For instance, SoFi Stadium, opened in 2020 and home to the Super Bowl winning Los Angeles Rams, was built at an estimated cost of between $5 billion to $6 billion, including all the land development around it.