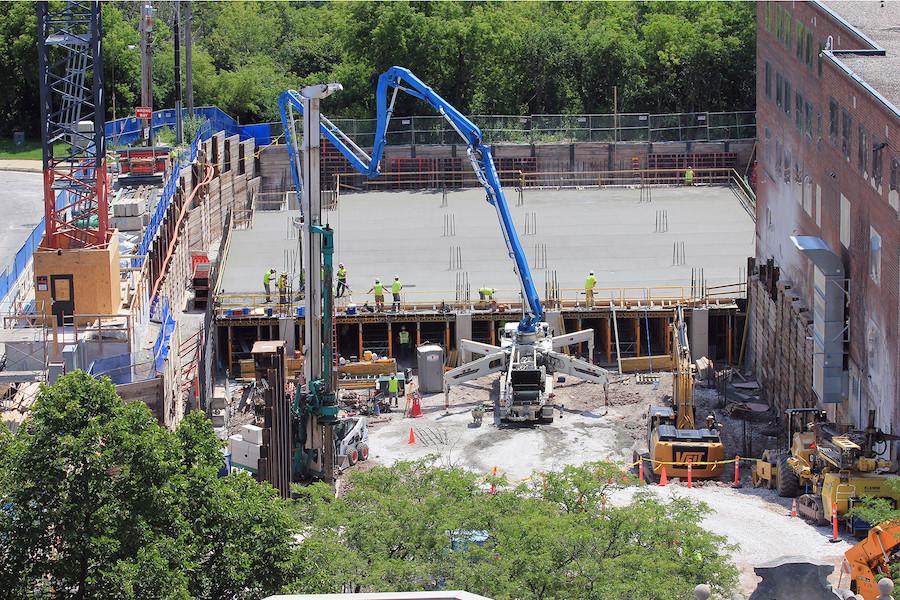 Excavators, off-road trucks and concrete-pump equipment have effortlessly joined the cranes and the crew in working on the foundations of the 22-story tower.

A beautiful view of nearby Lake Michigan will await residents of a new, 22-story tower just northeast of downtown Milwaukee when construction on the building is completed in 2020.

The new $123 million Saint John's on the Lake project is taking shape on a low hillside just across the street from McKinley Park, which borders the lake and is a short walk from the McKinley Marina.

Construction at the site began in April of 2018. The prime contractor is VJS Construction in Pewaukee. 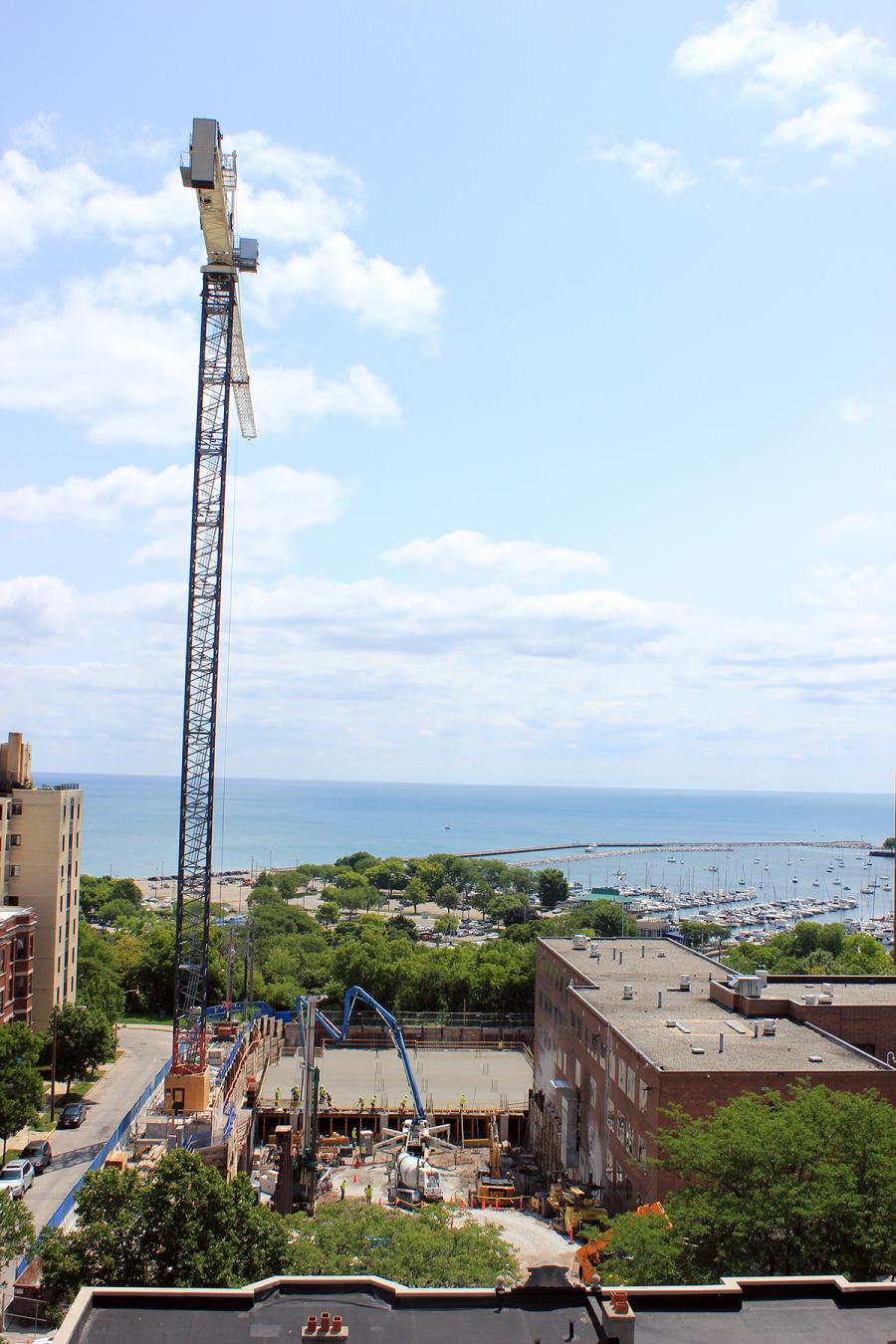 The tower is part of a five-acre complex of upscale senior housing facilities operated by Saint John's along North Prospect Avenue on Milwaukee's eastside. First opened in 1979, the campus offers older residents the options of independent living, assisted living and skilled-nursing care.

The latest building, which will be designated as the North Tower, will encompass 422,000 sq. ft. and is designed to include 170 units. It will eventually replace a three-story building, in place for almost four decades, that has 50 beds for folks requiring nursing care, as well as 24 assisted-living apartments.

When the new structure is finished, it will house 300 residents.

Nearby is Saint's John's 21-story South Tower, built in 2011, and a 10-story Central Tower that was part of the community's original footprint.

Renee Anderson, president and CEO of Saint John's Communities Inc. and the on-site manager of the complex, said the new tower at Saint John's is being built in response to the facility's long wait-list of applicants.

“Our market study indicated to us that there was capacity in our primary market area, the downtown and immediate North Shore here in Milwaukee,” she explained. “Interestingly, our own private confirmation of that is our level of pre-sales since we began the effort last summer. During that time, those pre-sales increased our waits list from 160 to over 180 families.”

With only about 20 units currently becoming available each year, the need for the new North Tower is plain to see.

Add to that the desire people have, regardless of age, to move back to downtown Milwaukee, particularly on the lakefront.

“At least for the product we offer, the demand exists,” she added. 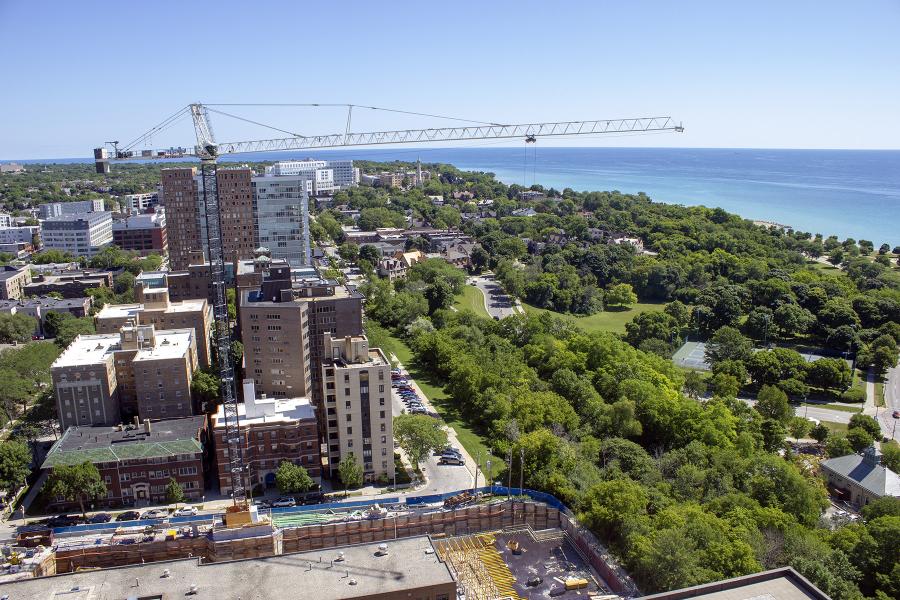 And that product will have much more space for both residents and members of the community.

Anderson said the 22-story structure underway will have Floors 2 to 4 set aside for 50 skilled-care and 24 assisted-living suites, while the fifth floor will be made up of 16 assisted living apartments — all with nursing support. Floors 6 to 22 of the new tower will be devoted to independent-living suites.

The four floors offering enhanced health care will all be made up of private rooms and are designed to be larger than those currently used for skilled nursing and assisted living.

“The apartments are similar to those in our current two towers,” Anderson continued, “although on average, the total square footage of those in the proposed building is bigger. They vary in size from 1,455 square feet to 1,920 square feet, exclusive of the top floor, where there will be two units, one at 2,490 square feet and one at 2,515 square feet.”

At about the 18-month point in the new construction, or late next year, the three-story facility which now houses skilled and assisted living rooms will be demolished, according to Mike Lingle, vice president of facilities at Saint John's. It is located right next to the new tower.

Residents currently in the three-floor structure will continue to live in their rooms while work progresses on the new facility, before moving to larger rooms. Others will temporarily relocate to shared rooms while the old building is razed. In its place, another new, four-story building will then be built and connected to the North Tower, giving those people sharing a room their own new space once again.

“Located between the new tower and the existing 10-floor building, we will also add a two-story auditorium, with a larger seating capacity than we can accommodate now,” Anderson added. “The new tower will allow us to expand the clinic, and the therapy and salon services, as well as an exercise studio adjacent to therapy — something we don't presently have. Renovations in the 10-story will change office space into things like a new bridge room and a ping-pong room. These are things we have room for now, but we don't have dedicated space for them.”

Each of these new and renovated structures and rooms will easily connect with the other buildings at Saint John's, she said.

According to Lingle, construction on the new North Tower is being accomplished in phases. Floors 7 to 14 are planned for occupancy in January 2020, with floors 15 to 22 ready the following April. The lower floors will be occupied when partially complete in November 2019, with full completion and occupancy set for August 2020.

Crews from VJS Construction are currently using tower cranes to erect girders at the site, all within sight of sparkling Lake Michigan just a block away, where pleasure boats can be seen in the marina on summer days. 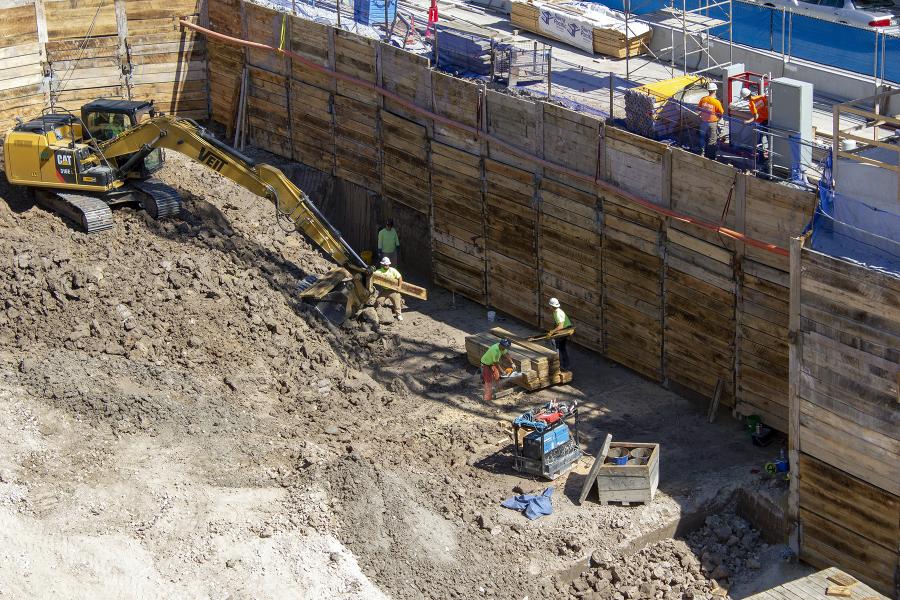 Located where a street-level employee parking lot had existed, the actual footprint of the construction site is relatively small. Despite that, excavators, off-road trucks and concrete-pump equipment have effortlessly joined the cranes and the crew in working on the foundations of the 22-story tower.

Slowly, over the next year, floor after floor will be added to the slender, elegant glass-and-steel building, designed by Milwaukee's Eppstein Uhen Architects.

Anderson said Saint John's on the Lake needed a new building that was dynamic in design and not simply a one-for-one replacement of what the complex has had.

“Truly, the driving force behind this project is the desire to replace the existing care neighborhood with a structure that is of a more current design, in keeping with the needs and expectations of our residents, and allowing us to work more efficiently,” she explained.

When finished, the Saint John's North Tower will add another dazzling, modern look to the city's skyline along the blue waters of the lake, which stretches well beyond the eastern horizon to the shores of western Michigan, approximately 85 miles away.