Crews began construction of a new overpass on Bell Road over Grand Avenue (U.S. 60) in Surprise, Ariz., in January. 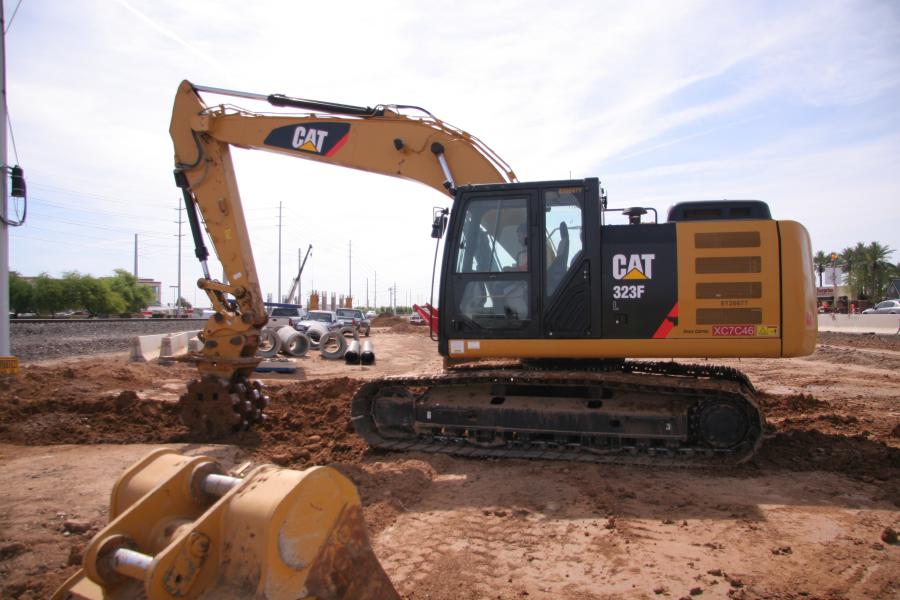 ADOT photo.Crews began construction of a new overpass on Bell Road over Grand Avenue (U.S. 60) in Surprise, Ariz., in January.

Crews began construction of a new overpass on Bell Road over Grand Avenue (U.S. 60) in Surprise, Ariz., in January. The project is part of a $41.9 million interchange project to improve traffic flow at the intersection.

The overpass is being built over Grand Avenue and parallels Burlington Northern Santa Fe Railway tracks. The overpass will replace the current ground level intersection. Workers have constructed a new 134th Avenue connection to Bell Road as part of the project.

“The new 134th Avenue provides a new connection with 134th Drive and maintains access to businesses north of Bell Road on the east side of Grand Avenue-U.S. 60,” said Steve Elliott, assistant communications director of public information at Arizona Department of Transportation.

Once completed, new on-ramps and off-ramps located along the center median of Grand Avenue will connect with the Bell Road overpass.

Coffman Specialties Inc. of San Diego, Calif., is contractor for the project, with approximately 30 subcontractors at the project site.

“Traffic congestion has increased with growth in Surprise,” Elliott said. “Time spent waiting for trains to cross Bell Road contribute to that.”

The project is designed to maintain traffic flow on Grand Avenue and Bell Road and is part of the Maricopa Association of Governments' Regional Transportation Plan.

Using cranes, crews are in the process of installing bridge girders and support piers both east and west of Grand Avenue. By July 10, most the girders used for the overpass had been lifted into place.

Along with bridge work, crews are busy removing old pavement, as well as section of curb and gutter along the south side of Bell Road east of Grand Avenue. Most of the work is being done during the day.

The bridge features three lanes in each direction with additional turn lanes. The eastbound side of the bridge is 115 ft. (35 m) long and the westbound side is 340 ft. (104 m) long.

Arizona Department of Transportation and Coffman Specialties are working with local leaders to minimize impacts by conducting business outreach; communicating with residents; and providing an access plan that includes signage to assist motorists and businesses.

“This project is so very important to the city of Surprise, as it will provide much-needed traffic relief at the county's third-busiest intersection and enhance the aesthetics at a signature gateway to our beautiful city,” said Bob Wingenroth, Surprise city manager, in a release.

“The improvements also will allow traffic to flow freely on Grand Avenue without the need to stop at Bell Road,” Elliott stated.

They also will provide better access to the city of Surprise and the businesses at the interchange, he said. And they will keep traffic moving for events like Major League Baseball's spring training games played in the area.

Elliott added, “Bell Road primarily serves as a regional connection for motorists, as it is one of the few crossings of the Agua Fria River in the West Valley.”

Grand Avenue remains open over the duration of the project. Drivers can expect Grand Avenue to be narrowed to two lanes in each direction in the area between Town Center and Bell Grande.

Bell Road closed on April 1 and was expected to remain closed for six to eight months from that date. The plan is to have the road open for the holiday season.

The closure is between 134th Avenue and West Point Parkway.

With Bell Road closed, a detour is in place via Litchfield Road, Westpoint Parkway, 134th Drive and Dysart Road. It allows access to and from Surprise Towne Center and Surprise Marketplace.

A detour map can be found on the project page at azdot.gov/BellAndGrand.