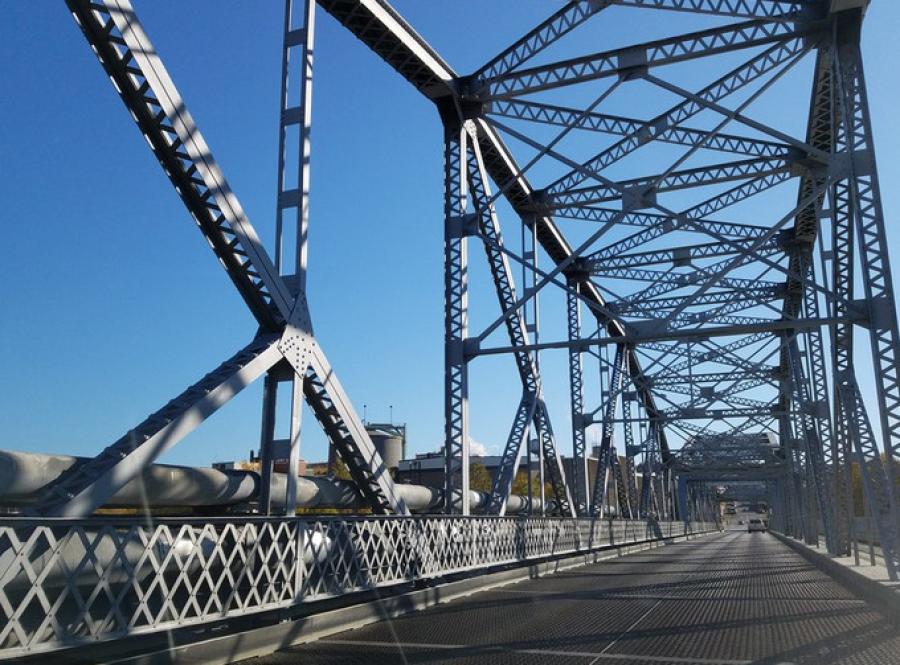 Both Canada’s New Brunswick transportation agency and MaineDOT agreed that, despite efforts to maintain its upkeep, the old bridge’s rate of deterioration was quickly bringing it closer to being obsolete. (MaineDOT photo)

Construction on two large federal infrastructure projects are scheduled to get going in Maine's most northern community this summer.

A long-planned effort to rebuild the Madawaska/Edmundston International Bridge across the Saint John River from Madawaska, Maine, to Edmunston, New Brunswick, along with the new U.S. Land Port of Entry (LPOE), will each likely transform the face of the tiny Maine community.

But the continued closure of the U.S.-Canada border, which began in March 2020 due to COVID-19 restrictions, has created uncertainty as to exactly when construction will begin. In addition, the final details on both projects remain uncertain.

Contractors for both the LPOE and the International Bridge have prepared to start work in the coming months, with Woolwich, Maine's Reed & Reed, specialists in bridge builders, planning to move trailers into town by the end of April, according to the St. John Valley Times.

Meanwhile, there is no official start date for the LPOE project either, with the federal General Services Administration (GSA) saying only that the current timeline marks this summer for the site preparation. GSA and its Tennessee-based contractor J & J Contractors are still designing their project, which should continue for another six to nine months, the GSA told the local new outlet.

The reasons for replacing the steel-truss International Bridge are straightforward: After almost a century of service, the span over the Saint John River was determined by DOTs in two countries to be in poor condition.

Both Canada's New Brunswick transportation agency and MaineDOT agreed that, despite efforts to maintain its upkeep, the old bridge's rate of deterioration was quickly bringing it closer to being obsolete. In recent years, its load capacity was determined to be a paltry five tons (the equivalent of a passenger vehicle).

MaineDOT said on its website that the nearly 100-year-old structure, "no longer meets the needs of the communities and local businesses because of its width and load capacity. It would cost more to upgrade the current bridge than to build a new one."

When construction on the new Madawaska/Edmundston International Bridge finally gets under way, it will be located approximately 1,300 ft. upriver of the old structure on the Saint John.

A more modern border station near the U.S. end of the bridge will be an upgrade over the "substandard" size and conditions of the existing building, too. MaineDOT has said the station prevented "customs and inspection agencies from adequately fulfilling their respective missions."

The reopening of the border between the United States and Canada cannot come fast enough for Reed & Reed as it worries about delays in its construction project.

"We sure hope they'll lift the COVID restrictions soon, because we need to have access over there," CEO Jackson Parker said while speaking to the St. John Valley Times. "I hope and think by the time we get up there and start working in May we'll be able to have open borders, [but] your guess is as good as mine."

If workers are unable to cross, Parker said the company would focus on building up the U.S.-side abutment until the restrictions lift.

Construction also will likely affect downtown driving in Madawaska, with Main Street running immediately adjacent to the LPOE site. Away from the downtown area entirely, the community's public works department will undertake the first stage of a major hot topping project.

Town manager Gary Picard was unsure what effect the ongoing work would have on traffic, saying that representatives from each project would be responsible for managing the flow individually.

"GSA, MaineDOT and their respective contractors will collaborate, coordinate and communicate any significant, planned traffic and travel impacts during construction as necessary," said Paul Hughes, a spokesperson of the GSA.

One thing is sure — with dozens of workers coming into Madawaska for the multi-year projects, the streets will be more full than usual, something that could spell promise for local businesses.

"That would definitely increase everything from apartment rentals to dining to purchases in the retail stores," Sharon Boucher, director of the St. John Valley Chamber of Commerce, told the newspaper. "It would mean a lot for the town."

Boucher has been assembling a directory of apartment rentals since a Reed & Reed representative called her earlier in April about bringing local subcontractors in on the bridge work. While the streets are quiet when Boucher leaves work at night now, she sees a bustling Main Street in Madawaska's future.

"I really think we're going to have a lively downtown," she predicted.