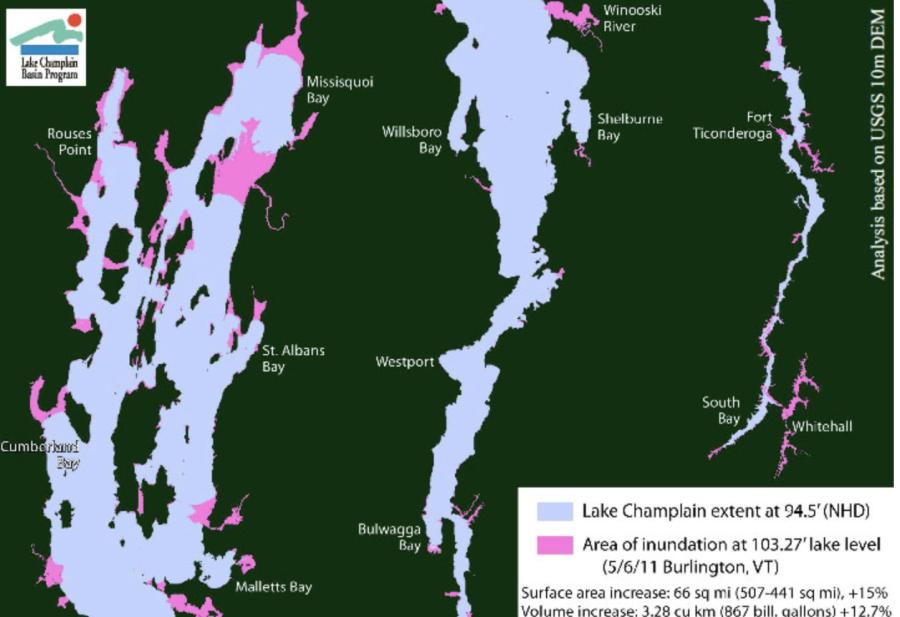 By studying the past, especially the floods that occurred in 2011, scientists will be able to look for ways to better forecast flooding and measures to reduce the effects of future floods.

United States and Canadian scientists are planning to spend the next five years studying flooding on Lake Champlain and the Richelieu River, which drains the lake north into Quebec, and whether methods can be developed to control future flooding.

Besides studying the causes of past floods, particularly the historic floods in 2011, the scientists will look for ways to better forecast flooding and measures to reduce the effects of future floods, considered likely with weather extremes in an era of climate change.

The scientists conducting the $11.3 million study will look at issues such as what effect the Chambly Canal, which takes vessels around a series of rapids near the Quebec city of Saint-Jean-sur-Richelieu, could have on flooding, said Jean-Francois Cantin, chief of east hydrological operations for Canada's National Hydrological Service.

They also could focus on how V-shaped, man-made stone eel-traps, visible in aerial photos of the river shoals, could affect the flow of the river, said Cantin, who also is the Canadian co-chair of the International Lake Champlain Richelieu Study Board.

“The shoals there are really the natural control of the whole system upstream of Saint-Jean-sur-Richelieu, the lake [and] the water levels,” he said.

The board is conducting the study for the International Joint Commission, an organization formed in 1909 to manage boundary water issues between Canada and the United States.

The study began in 2013 in response to historic spring flooding along Lake Champlain in Vermont and New York in 2011 that kept the lake and areas along the river above flood stage for more than two months. The flooding in Saint-Jean-sur-Richelieu, population about 93,000, affected about 3,000 homes in low-lying areas and lasted until mid-June.

The research marks the third time the International Joint Commission has looked at flooding in Lake Champlain and the Richelieu. In 1937, the commission approved construction of a flood control dam near Saint-Jean-sur-Richelieu that was never finished. In 1981, after a six-year study, the commission concluded that flood forecasting and flood plain regulation were desirable and that a flood control system could be built, but no action was taken.

Cantin said the public will be kept aware of developments as the study progresses.