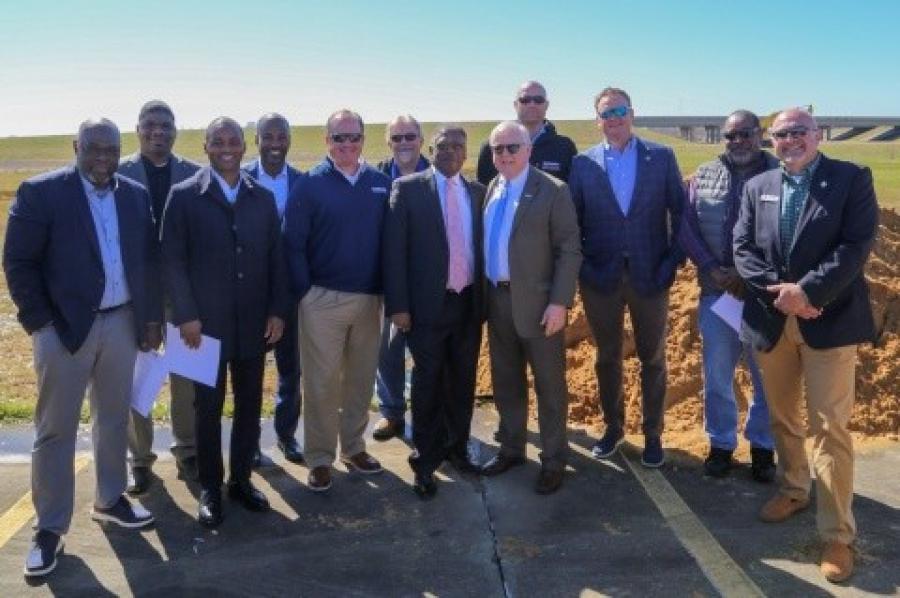 "I recall 15 years ago driving down this highway and seeing that bridge and wondering, ‘Where was that bridge going to and when will we get it completed?'" he said during the ceremony outside the Greenville Higher Education Center. "I saw where the casino had opened, [where] the bridge going across U.S. 82 had opened, [plus] we had all these chemicals going through Greenville, and [the mayor] was on my case about getting something done with Highway 82."

Fast forward to more than a decade later and Simmons has the answer to both questions after he played a significant role in bringing about what will be one of the most substantial projects in the history of the Mississippi Department of Transportation (MDOT).

According to a media advisory issued by MDOT, the project provides for the construction of approximately 9 mi. of four-lane highway known as the "U.S. Highway 82 Greenville Bypass from State Route 1 to Leland."

The $137 million project was awarded to Aberdeen, Miss.-based Eutaw Construction Company in January and is expected to be completed by no later than fall 2025. Eutaw Construction owner Thomas Elmore hinted at the groundbreaking that the road building effort could be finished even sooner.

He was joined at the event by several members of his construction crew.

"They're all young, but they're well qualified and I appreciate them very much," he told Greenville's Delta Democrat-Times.

In addition, several state and local dignitaries were on hand for the ceremony where they had an opportunity to hear from some of the project's engineers as well as "Buddy" Dees, son of the late Anselm Dees, the man for whom the bypass will be named.

"The project will open up potential development for both [the towns of] Greenville and Leland," he said, while also reiterating it will be one of the largest projects MDOT has ever attempted. "It's scheduled to begin [in February] and be completed in September 2025.

Glenn noted that 7,500 yds. of concrete, and 184,000 tons of asphalt, among other requisite materials, will be used for completion of the bypass.

"Glenn is going to be the inside guy who's going to be having hands on to make sure the project is moving swiftly," Simmons explained. "But once we complete [its initial phase], then we will move to the second phase from MS Rt. 1 over to U.S. 82 again at the Mississippi River bridge."

The Democrat-Times reported Eutaw Construction has begun hosting job fairs, meaning that Washington County residents are able to apply for work on the project.

"This is going to be a booming economy as a result of what we're doing and that's what transportation infrastructure is all about," Simmons added. "I'm so proud to be the commissioner of the MDOT Central District and to bring this project, which I consider to be one of the greatest things to happen to the Mississippi Delta in many years."

Anse Deems Was a Leader in MS Road Modernization

Before recapping the legacy of his father, Buddy Dees took a moment to express his appreciation for Simmons' efforts.

"You deserve the credit that's emblematic of the kind of dedication that you bring to the central district and we're proud of that," Dees said to Simmons.

Anse Dees Sr. was a long-time insurance agent and lawyer who served Washington County and the Mississippi Delta faithfully, according to the Greenville news source. Before his death in 2009, he was an advocate for the modernization of Mississippi's roadways, including the 1987 legislation that brought over 1,000 mi. of four-lane highways to the largely rural state.

Because of his being such a well-known proponent of the state's highway system, the Mississippi Legislature resolved to name the U.S. 82 Bypass in his honor upon the project's completion.

"I'm just so glad Commissioner Simmons pushed this across the line," Dees told the gathering at the groundbreaking. "If ever there was a ‘shovel-ready' project, this was it, and we thank you so much for bringing this [to] fruition."