US Navy Project was ’Job of a Lifetime’

The restoration of a national treasure reveals an "amazing spectacle."

NEWBURYPORT, Mass. (AP) - Zampell Companies senior operations manager Joe Riccio is used to tough projects, but the past summer presented the 45-year-old with something very unique.

Headquartered in Newburyport, Zampell Companies was the firm tasked with providing the scaffolding for the U.S. Navy’s $15 million USS Constitution restoration project.

Virtually everyone involved had fond memories of the historic vessel from their elementary school days, according to Zampell vice-president Brian Zampell.

”We were really excited to get this kind of job,’ Zampell said. ”We were just happy to go down there, we felt like a little kid going around there.’

”We have all been there as kids and have seen it in textbooks and everything else,’ Riccio said. ”It wasn’t just so much of an issue of `wow, we are here.’ It was just how grand of a ship it really is when you take it out of the water.’

A Wenham native, the 33-year-old Zampell, like most other Massachusetts natives his age, took a school field trip or two to the Charlestown Navy Yard to see the USS Constitution as a child. But Zampell and Riccio’s experiences this summer showed a different side_ or more to the point, bottom _of the 218-year-old frigate which was dry docked in Charlestown.

”When we bid the project, the ship was in the water,’ Riccio said. ”So, we couldn’t get a really good idea of what we were exactly up against until it was actually in the dry dock with water drained, and then situated at the bottom so that we could actually take a hard look at it and put our final plan together.’

The company has worked in and around power plants, boiler rooms, submarines and a host of different-shaped vessels over the past 49 years, but standing under a dry docked USS Constitution, Riccio said the enormity of the project - as well as the historic implications - sunk in for the Zampell crew.

”Going into it, we all had that anticipation about how this was an historic project,’ Riccio said. ”It’s really impressive. It really gives you the scope of how big that ship really is. Most of it is underwater. You see the mast, you see the top deck, and that is pretty impressive when you see it sitting in the water. But once you get to the bottom of the dry dock where you are actually about 40-feet-below the top deck, then you get an idea of how big this thing is. It is all clad with copper. It’s just an amazing spectacle.’

With about 20 employees surrounding the ship’s hull with scaffolding, Zampell was able to finish the project safely, and ahead of schedule, which pleased Riccio, who reported there were no surprises.

”There were no sunken treasures, nothing like that,’ Riccio said.

At 228-feet-long by 60-feet-wide and 45-feet-tall and with work platforms every 6.5 feet in height, the Zampell scaffolding will protect the Navy craftsmen during Old Ironsides’ restoration, which is expected to last three years.

The work recently won Zampell an Eagle Award for Excellence in Construction from the Associated Builders and Contractors, Inc.’s Massachusetts chapter.

”The company is really proud of our employees and the job they do,’ Zampell said. ”It is a very complicated scaffolding job because you have to go around all kinds of different curves and everything else. As much you plan for it, how can you really plan to scaffold the USS Constitution? But those guys went in there and knocked it out.’ 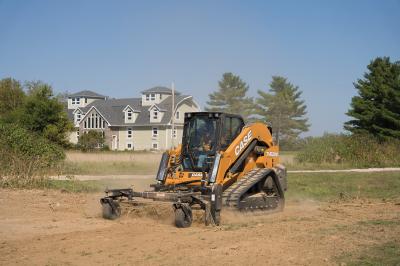