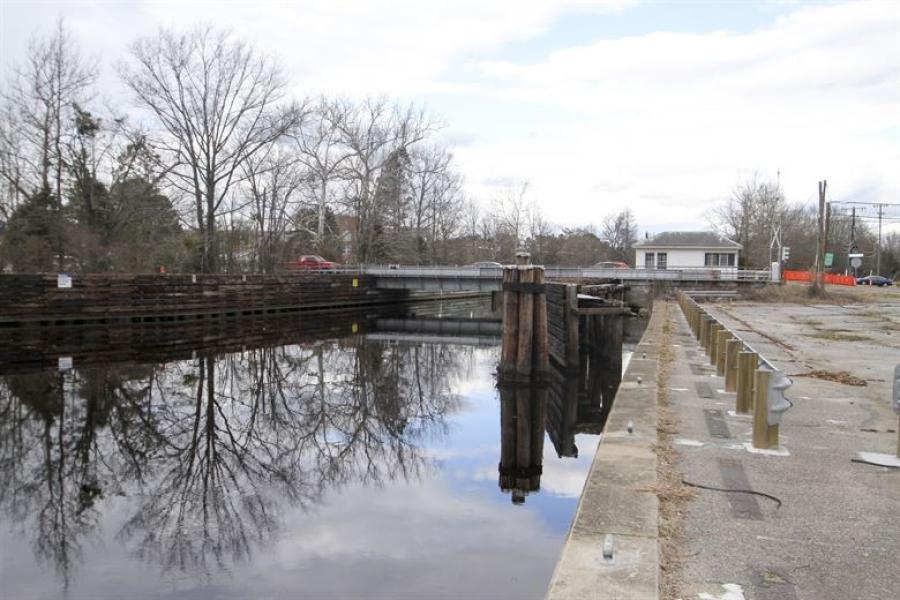 CHESAPEAKE, Va. (AP) When the Peterson family was told 20 years ago the federal government would need its land to build a new, wider Deep Creek Bridge in Chesapeake, it abandoned any ambitious plans to develop it.

Why invest in building something to attract long-term tenants on a property that would only be bought up and torn down anyway? But that was 20 years ago.

Fast forward to last October, the Norfolk District of the U.S. Army Corps of Engineers was working on acquiring the remaining parcels needed for construction, drainage ditches, easements and other parts of the project. It hoped to advertise a contract in January and award it in the spring.

But Mark Peterson, a retired orthodontist, said the corps has, so far, not offered a fair price for the parcel his 93-year-old mother owns. He said the agency is to blame for the hold-up.

"We live in Deep Creek. We go across that bridge ... Nobody wants this more than we do," he said.

The property, which is just under an acre, is key for construction as it sits exactly where the new bridge would go. Plans for the $57.9 million project have spanned 15 years as the Corps of Engineers, which owns and maintains the bridge, gathered funding.

The agency originally offered $425,000 for the property around two years ago. Since then, the offer has risen to $490,000, according to the family's attorney. Peterson said he believes the property is worth close to $1.5 million.

Peterson and the attorney have wanted to see the corps' appraisal but say they have been rebuffed by the agency and told regulations don't allow it.

"They have this number — $490,000 — they really don't want to negotiate off of, but we have no idea what that's based off of," said Brian Kunze, an attorney representing Margaret Peterson, Mark's mother. "They're forcing a one-way flow of communication and then blaming the property owner for not wanting to get things done."

The family is among several landowners who have not sold their property to the corps yet. The Corps of Engineers said it's a hold-up that has delayed the project by nearly a year. It will take three years to build the bridge, which means it won't be completed until 2024 at the earliest.

The planned five-lane, dual-leaf drawbridge will be three times as wide as the current bridge, which was built in 1934. The city of Chesapeake plans to contribute $20 million toward construction and the federal government will cover the rest.

The two-lane bridge is notorious for causing traffic in the area as more cars use it to cross the Dismal Swamp Canal and Atlantic Intracoastal Waterway. The current structure is sound but can't sustain the amount of traffic because of its size, according to the corps.

After unsuccessful negotiations with the owners of seven parcels, including the Peterson family parcel, the corps' next step will be filing condemnation documentation with the Department of Justice which will determine a price for the property.

Kunze said the condemnation process may be the only way they will be able to get clear reasoning for the offer amount. Several meetings have taken place in the last two years, but none of the conversations have been "positive or productive," he said.

In the meantime, Peterson said he plans on hiring his own appraiser.

When The Pilot asked why the Petersons weren't given an appraisal, the corps said appraisals are "generally considered pre-decisional documents and subject to the deliberative process exemption under the Freedom of Information Act."

The agency said it provided each property owner with a summary of pertinent information in the appraisal but cited privacy concerns when asked for it by The Pilot.

A copy of the summary provided by Kunze included comparable sales of offices and land but didn't include details such as sale dates or acreage.

"It is similar to if the Corps gave you three pieces of a 5,000 piece jigsaw puzzle and told you to guess what the overall picture was," he said.

Mark Peterson said his family asked for updates on the project every year and when their land would be needed. "Two more years" was the answer they always received from the city or the corps, he said.

So the family didn't develop the dental and orthodontic offices on the property that they wanted to. Peterson estimated it could have provided close to $2 million in revenue.

"There was nothing here. This was just a farming community and it was very underserved. So we were going to bring in a bunch of dental specialists," Peterson said. "If we had known this [delay] was going on, we would have done our original plans and built the buildings up there that we wanted to build. We would have [had] people in there for 20 years."

The family purchased the property in the late 1970s and Peterson's father ran an orthodontic office in a small, 1,200-sq.-ft. building on the property until another orthodontist took over the practice 15 years ago. Five years into that orthodontist's lease, Peterson's mother reduced the monthly rent by $700 and made it month-to-month.

For the last three years, the corps had sent letters to the tenant instructing him to move out, Peterson said. The tenant moved out in June. Since then, Peterson's mother hasn't received rent and pays the taxes and expenses previously covered by the income.

Peterson said he's been waiting for the bridge to be built just like every other member of the community, but a fair price needs to be on the table first.

"Two more years, two more years' — 20 years of that has been going on," Peterson said. "It is mind-boggling."