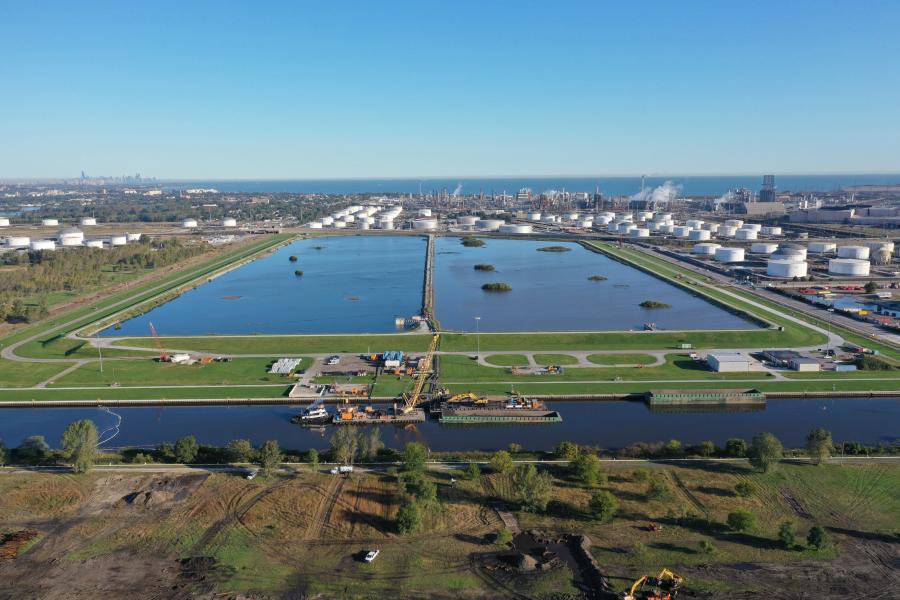 Monitoring efforts are under way following completion of this season's dredging operations at Indiana Harbor and Canal (IHC) in East Chicago, Ind. It is one of the most polluted waterways in the Great Lakes area. Crews will treat water from the confined disposal facility (CDF) until freeze up, with the 2020 season scheduled for next spring.

"There's a lot of contaminated sediment to remove," said Mike Nguyen, dredging program manager at the U.S. Army Corps of Engineers (USACE) Chicago District. "The IHC had not been dredged since 1972, and there was approximately 1.6 million cubic yards of backlog material to be dredged. The dredging contractor currently removes 200,000 to 300,000 cubic yards of material from the waterway each year. Various factors limit the amount of material that can be removed, including funding, weather and operational limitations for the CDF."

"Sediment naturally moves with water down rivers with the current, and with wind. The sediment tends to build up in sand bars, or shoals. These shoals cause the water to be more shallow, and interfere with the boats trying to travel through the channel or harbor. If the shoal is not removed, the boats have to carry less cargo, which is a less efficient operation. The shoals also are a safety issue for mariners."

Indiana Harbor is part of the Grand Calumet Great Lakes Area of Concern.

"It is widely known that the areas of concern (AOCs) have some of the worst environmental conditions on the Great Lakes, at least, before the current restoration program began," said Nguyen. "As part of the Indiana Harbor project, the Corps has conducted numerous public meetings during the feasibility study, design, construction and operation of the CDF and prior to dredging to help inform the public and ease their concerns about the dredging. This includes annual meetings that occur prior to dredging each year.

To ensure the safety of the IHC Confined Disposal Facility, the Corps performs extensive monitoring, including real time and ambient air monitoring.

"The Corps has been dredging every year since 2012 to remove sediment that had accumulated in the harbor and canal. Dredging of the IHC helps restore the efficiency of deep draft commercial navigation, while significantly reducing further pollution of Lake Michigan by removing the contaminated sediment that can otherwise migrate into the lake."

One of the Corps' key missions is navigational maintenance. 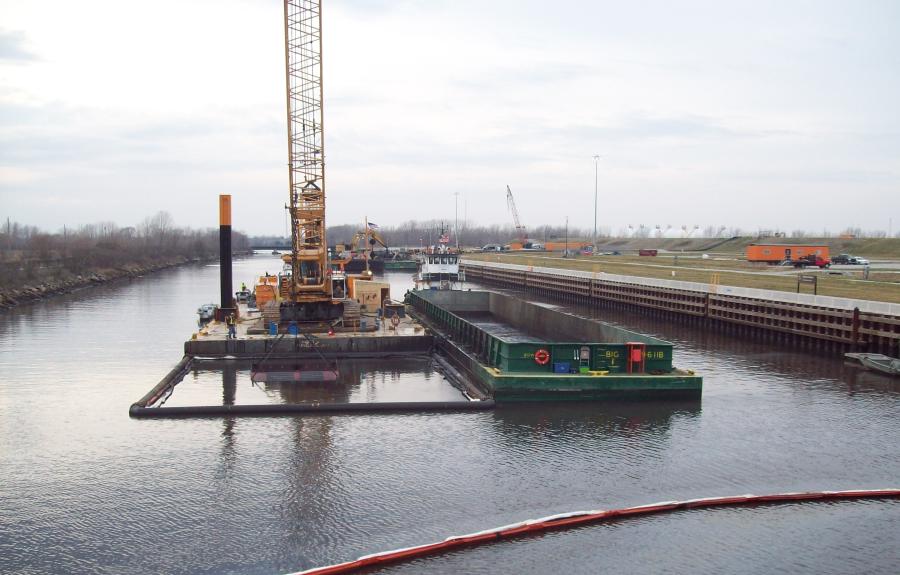 "The Corps has a responsibility to maintain all federal channels and harbors throughout the country, for purposes of commerce and national security. IHC is one of these federally maintained waterways. Dredging is required at IHC to keep the federal channel at the congressionally authorized navigation depths. The Chicago District hires experienced contractors to help support this mission.

The environmental concerns tied to the harbor are significant.

"Historically, prior to passage of the Clean Water Act, many industries discharged water that contained waste products such as metals, oils, various chemicals and sometimes solid materials and debris," said Nguyen. "These materials don't wash away. Instead, they build up in the sediment. Over time, the Indiana Harbor area became known as a very polluted area, with oily black sediments that were toxic to fish and other aquatic organisms."

"The adverse impact could be seen in the movement of the sediment in the nearshore zone for a distance of more than five miles from the harbor entrance, affecting water supply intakes and sport fishing and recreation areas. It's estimated that between 100,000 and 200,000 cubic yards of polluted sediment were being discharged from the harbor into the lake annually. Dredging has removed these polluted materials from the environment, and isolated them in a manner that protects humans and wildlife in the area."

"As the facility fills, balancing the water level in the CDF to ensure the ability to dredge has become more challenging. A second lift on the dikes will provide additional capacity for future dredging. The dike lift is being planned for future years."

"Mechanical dredging is widely used on the Great Lakes, and has the advantages of entraining less water, so that the sediment is drier to place in the CDF," said Nguyen. "In addition, hydraulic dredging cannot remove debris. A closed bucket — also referred to as an environmental bucket — has seals to keep material from spilling back into the canal and causes fewer water quality impacts during dredging."

Nguyen said weather doesn't affect the dredging, unless it's severe during the warmer months, with lightning or other conditions forcing a shutdown.

"The dredging operation has to stop for the winter due to cold temperatures which freeze the water in the piping system. In general, dredging on the Great Lakes occurs from spring to fall, with a winter shutdown period." 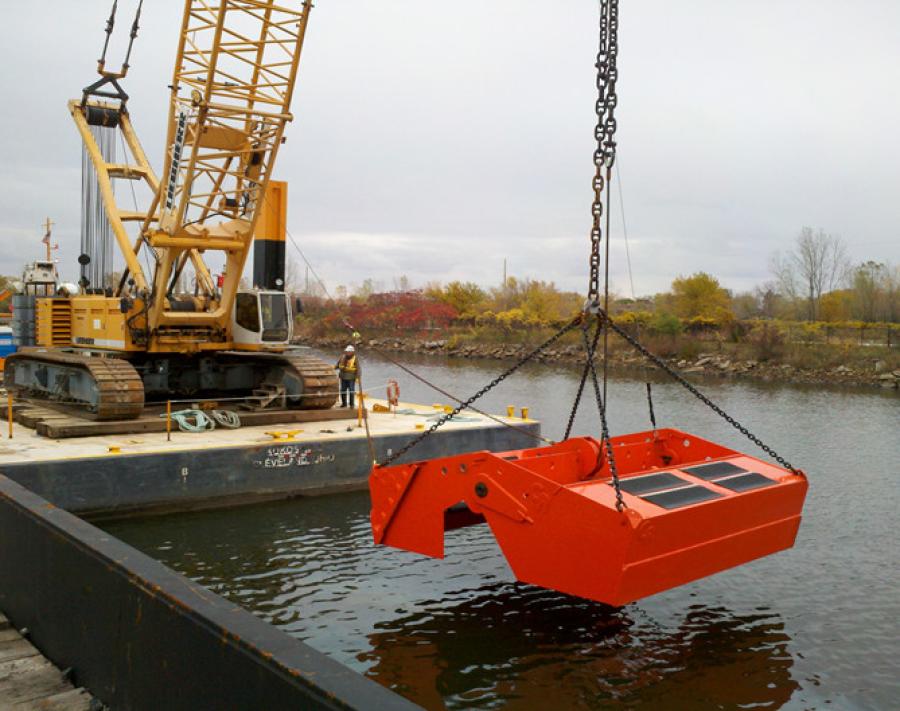 Kokosing is responsible for the dredging, transportation and placement of the dredge material within the CDF. This season, slightly more than 160,000 cu. yds. of material has been dredged and pumped into the CDF. Of that material, 17,000 cu. yds. of Toxic Substances Control Act (TSCA) material was removed from 10 separate locations within the shipping canal, and 143,000 cu. yds. of Resource Conservation and Recovery Act (RCRA) material was removed from three separate locations within the canal. In the TSCA areas, fabric mats were placed along with 1.5-2.0 ft. of ballast stone overtop of the fabric mats.

According to Aaron Harke, vice president, Kokosing Industrial Durocher Marine Division, there are multiple bridges along the dredge route that were/are in various states of maintenance which led to weekly, if not daily, delays.

"Portions of the dredge area are busy, which leads to a fair amount of operational conflict that needed to be managed on site. Government funding is variable, so planning for the next season was, at times, difficult."

Ken Smith, Kokosing marine lead field engineer, said starting and stopping operations is not as challenging as it might seem.

"If we are dredging in the same areas, it is not hard at all. It's once we have to move all of our dredging equipment and data collection equipment to a different area. This is where it can become difficult at times."

Regarding mechanical dredging with the environmental clam bucket, said Smith, "In environmental dredging, it's essential to remove contaminated sediment in a uniform fashion. Cable Arm's patented Level-Cut footprint makes this possible. As the clamshell closes, the edges draw together and the pivot point lifts, leaving a large rectangular footprint that is near level. Each successive bite overlaps the previous to ensure complete sediment removal."

Smith noted that the debris/sediment separation process requires a fair amount of planning.

"In the beginning, material is removed from the sealed 1,800-cubic-yard hopper barges and placed in the debris separation barge [DSB]. The dredge material is placed on a grating system and the pumpable material falls through the grates and the debris is removed from the top of the grating and placed in a separate bin within the DSB to be dealt with at a later time in the project.

"Debris separation begins by placing the debris in one of the empty hopper barges. This material is then removed by using the Komatsu PC1250 and placed in either 7.5-cu.-yd. wheeled loaders or haul trucks, then hauled up to the CDF and placed by using a long reach excavator."

As for disposal efforts, dredged material is mixed with water that is obtained from the CDF, to make a mud-mixture. This slurry is then pumped into the CDF and allowed to settle. As the sediment settles to the bottom, clean water remains at the surface, which can then be recycled for additional sediment placement.

Depending on where crews are currently dredging, the travel length for a barge can be more than four miles, and can take up to one hour to reach the CDF offloading site, if workers are not delayed by any other traffic on the canal or do not run into any bridges that may have issues at that time.

All backlog dredging should be completed by 2021. While the process can be tedious, Nguyen said the project is extremely important.

"The Indiana Harbor and Canal is a federally maintained commercial navigation channel. It's interconnected with 18 commercial ports on the Great Lakes, shipping to 10 and receiving from 16 others. The maintenance of this valuable economic network is important to our nation and to the region." CEG