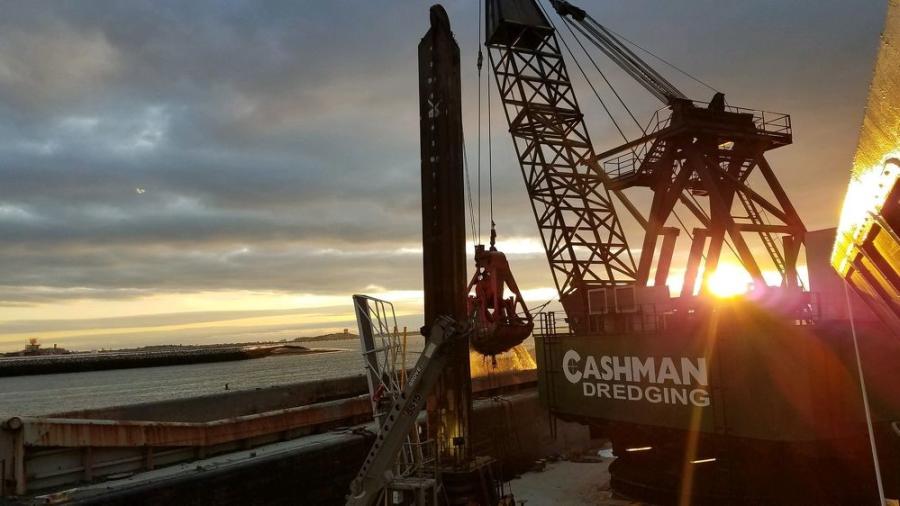 The U.S. Army Corps of Engineers, New England District reached the milestone on April 5, 2019 of removing 4 million cu. yds. of dredge material as part of Phase II of the three-phased Boston Harbor Navigation Improvement Project in Boston, Mass. Approximately 7.7 million cu. yds. of dredge material and weathered rock, and 200,000 to 500,000 cu. yds. of hard rock remain to be removed before the project is fully completed by December 2021.

The project would not be possible without the support of the project sponsor, Massport, and the exceptional partnerships and coordination between the Corps of Engineers, Massport, U.S. Coast Guard, Boston Pilots Association, Boston Logan International Airport, lobstermen, recreational users, and many others.

The Boston Harbor improvement and deepening project has been many years in the making, through the study, analysis and planning phases, design and now construction.

"The project involves deepening and improving various portions of the Boston Harbor Federal Navigation Project," said Jenifer Thalhauser, project manager, of the Corps of Engineers, New England District, Programs and Project Management Division in Concord, Mass. "Project benefits will be realized with reduced tidal delays for cargo vessels and the capability of the Port of Boston to receive larger cargo ships which will benefit both regional and national commerce."

This is a three-phase project. Phase 1 (completed) involved constructing a Confined Aquatic Disposal (CAD) cell by dredging 1 million cu. yds. of material and disposing of that material at the Massachusetts Bay Disposal Site. Once the CAD cell was constructed, maintenance dredging of approximately 800,000 cu. yds. of silty material from portions of the 40-ft. Main Ship Channel, the 40-ft. deep Inner Confluence, and portions of the 35-ft. deep channel, were placed into the newly constructed CAD cell. The $12.8 million contract was awarded to Great Lakes Dredge and Dock of Oak Brook, Ill., in September 2016. Construction started in July 2017 and was completed in December 2017.

Phase 2 (currently ongoing) involves dredging 11.7 million cu. yds. of silt, blue clay, till and weathered rock. The $122.2 million contract was awarded to the joint venture of Cashman Dredging Inc. and Dutra Group in February 2018. Construction started in July 2018 and is anticipated to be completed in October 2021. The milestone of dredging 4 million cu. yds. of material for phase 2 was reached on April 5, 2019. 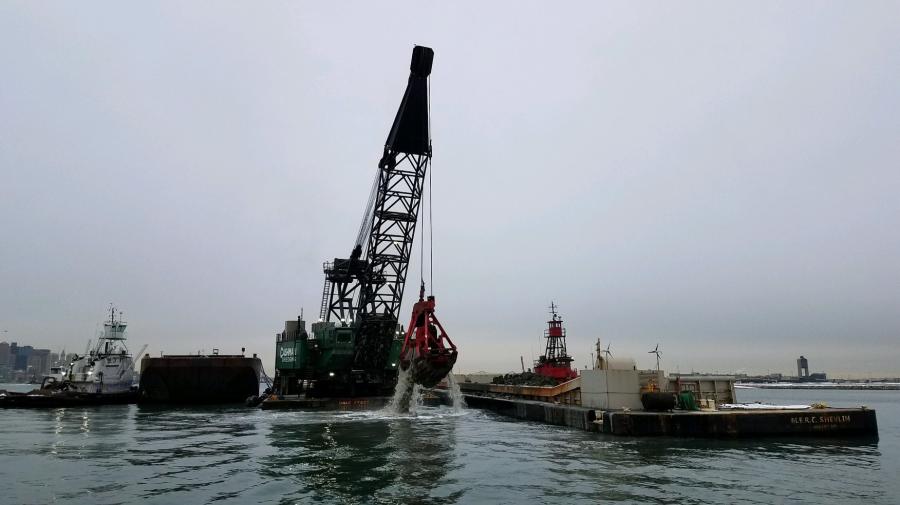 "The federal navigation improvement project will allow the Port to accommodate large container ships that are calling on the U.S. east coast now that the Panama Canal improvements are completed," said Thalhauser.

The dredge material is being placed in the Massachusetts Bay Disposal Site (MBDS), approximately 20 mi. offshore of Boston Harbor, with the exception of a small fraction of the material that was placed as a cap to the Main Ship Channel Confined Aquatic Disposal (CAD) cell, just downstream of the inner confluence of the Chelsea and Mystic Rivers.

Phase 3 (future work) will involve removing approximately 200,000 to 500,000 cu. yds. of hard rock. The contract solicitation is anticipated to be released in spring 2020 with the work getting underway later that year and when finished will then complete the entire Boston Harbor Improvement project. Completion of the entire project is expected by December 2021.

According to Thalhauser, one of the biggest challenges of the project was the extensive coordination required.

"It is a very active navigation channel and has required extensive coordination with the U.S. Coast Guard, commuter ferries, Boston Harbor pilots, recreational users, lobstermen and other construction activities in the Harbor involving Massport and Eversource Energy," she said. "Also, the proximity to the Logan Airport required extensive coordination with Massport Aviation, FAA and Logan ATCT."

Improvement deepening of Boston Harbor was authorized for construction by the 2014 Water Resources Reform and Development Act (WRRDA). The WRRDA referenced a Chief of Engineers Report, signed Sept. 30, 2013, which was transmitted to Congress on Feb. 26, 2014.