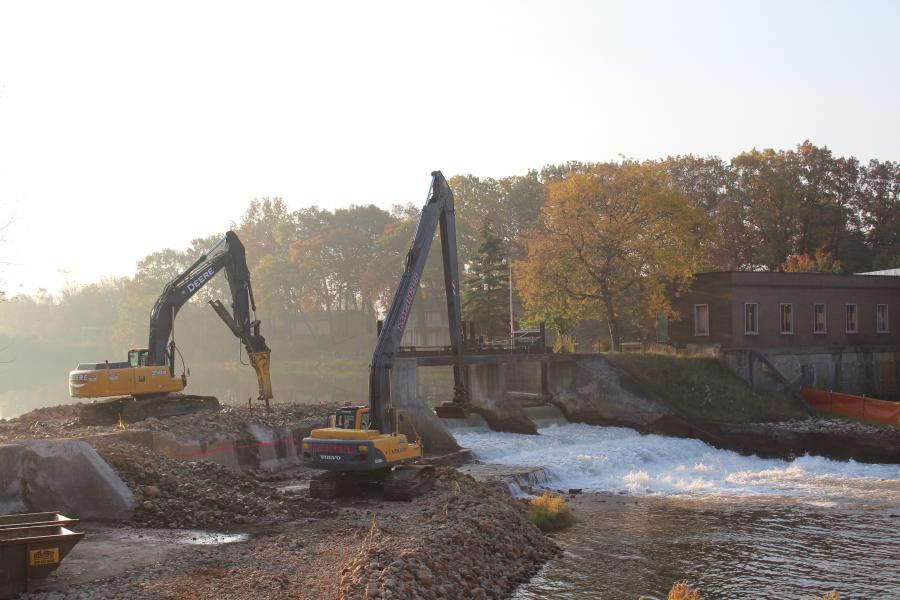 The final phase of the U.S. Army Corps of Engineers' Kansas City Levees Project is under way at various stages of design and construction to start in the Fall with the investment of $453 million to cover levee and floodwall raises; replacements and repairs to existing pump stations; improvements to aging infrastructure; and seepage and stability improvements.

The initial phases of the project, completed during 2009-2017, saw nearly $30 million of improvements that upgraded and strengthened existing levees and floodwalls along the Missouri River in Kansas City, Mo., and Kansas City, Kan. 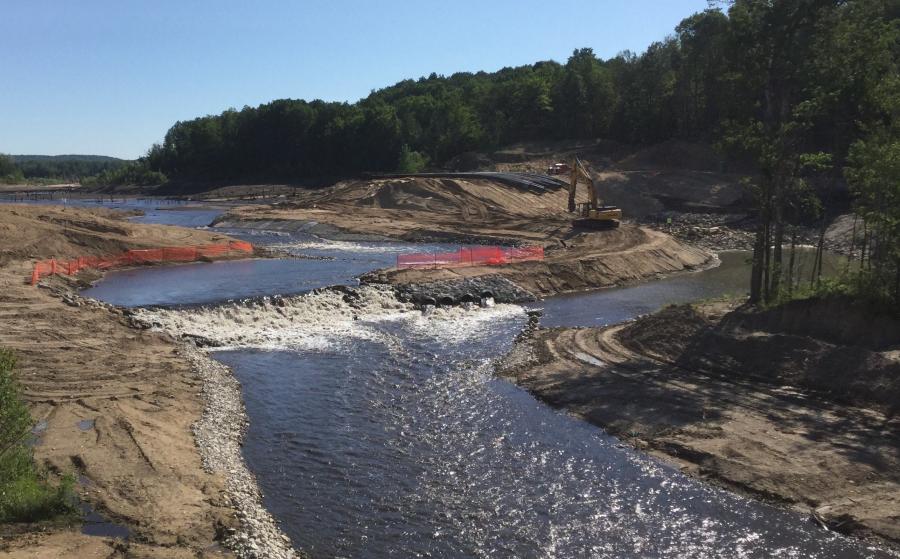 The Corps' local partners in the final phase are the Kaw Valley Drainage District, the Unified Government of Wyandotte County and Kansas City, Kan., and the city of Kansas City, Mo. The Corps, responsible for the design, construction and delivery of the project, is covering nearly 100 percent of the cost, with the local partners responsible for the acquisition of necessary real estate and utility relocations.

"The Kansas Citys, Missouri and Kansas Levee project consists of seven levee units, including 60 miles of levees and floodwalls along both banks of the Missouri and Kansas Rivers in the Kansas City Metropolitan area," said Scott Mensing, the Corps' Kansas Citys Levees Program Manager. "The overall system protects 32 square miles of industrial, commercial and residential areas, and includes 100,000 jobs, 7,000 structures and $25 billion in infrastructure. The area is vital to the national economy as a manufacturing, distribution, transportation and warehousing hub. The safety of residents who live and work behind the levees and floodwalls is paramount to the Corps. The purpose of this project is to ensure these levee systems fully perform during the next flood event.

"The remaining items include improvements to 17 miles of existing levees and floodwalls along the Kansas River in the Kansas City Metropolitan area," he added. "This collaborative effort will reduce the risk of flooding to homes and businesses located behind the levees, improve the reliability and resiliency of the systems, strengthen aging infrastructure and ensure the levees and floodwalls perform during future flood events. Our goal is to complete the project by 2024. This final phase will complete nearly 15 years of construction on the system. Improvements are complete for the Fairfax/Jersey Creek, North Kansas City and East Bottoms Units along the Missouri River."

Planning for the overall project began in 1993 immediately after the great flood that occurred that year — the second largest flood on record for the Kansas River, which stressed the need for the Corps intervention. 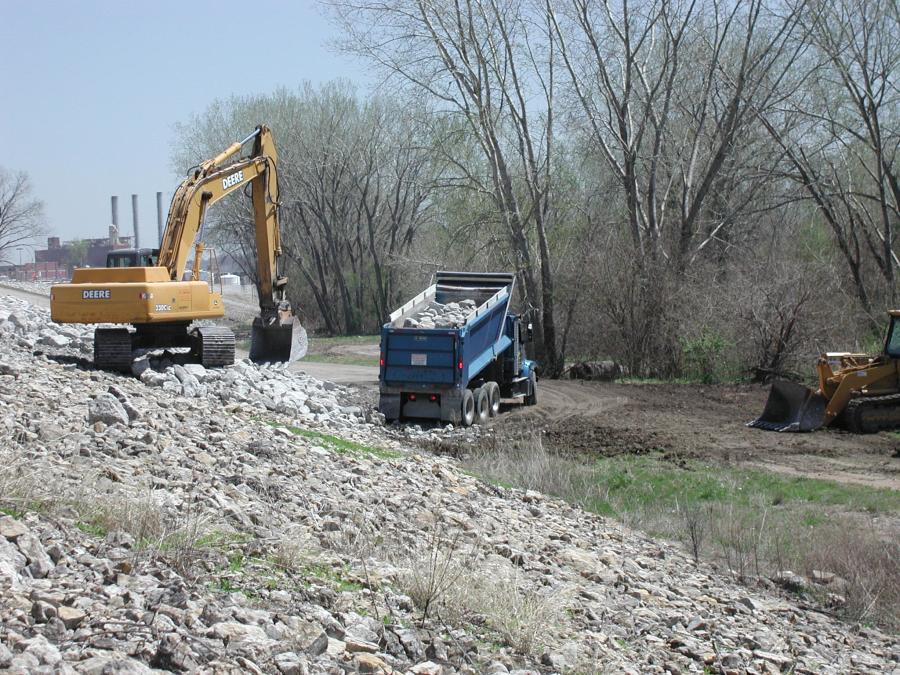 "The Armourdale and Central Industrial District [CID] units had approximately six inches of freeboard as the July 1993 crest moved through," said Mensing. "The local partners, together with the Corps, were sandbagging the tops of levees to fight the flood event. The planning process for Corps projects are rigorous and the initial feasibility study was completed and authorized in 2007 and the second phase of the study was authorized in 2015. The remaining project was fully appropriated [funded] in the Bi-Partisan Budget Act of 2018 to ensure that the benefits to the Kansas City area could be experienced as soon as possible.

The levees and floodwalls will be raised between 4 and 5 ft. along the Kansas River – beginning at the confluence of the Missouri River and extending past the Turner Memorial Bridge in Kansas City, Kan. The initiative also replaces 18 closure structures; repairs or modifies dozens of drainage structures; installs nearly 150 relief wells; and modifies or replaces 19 pump stations.

The first contract for the upcoming work, a $33.3 million design-build contract, was awarded to Michels Corporation for the design and construction to replace and modify three pump stations within the Argentine Levee Unit. This contract, still in the design phase, will be completed in 2022. Improvements will be made to the Turner Pump Station; the Argentine Main Pump Station; and the Strong Avenue Pump Station.

"These pump stations were originally constructed between 70 and 100 year ago and have withstood a number of floods," said Mensing. "The pump stations pose a considerable risk to the levee units. When you review them compared to current criteria and where the new top of levee will be set, we need to make improvements to ensure that they will fully function during the next flood."

The stations have undergone improvements since 1993, but many of the original structures and their equipment, including some of the pumps, are original. The new improvements are designed to cover a 50-year period. 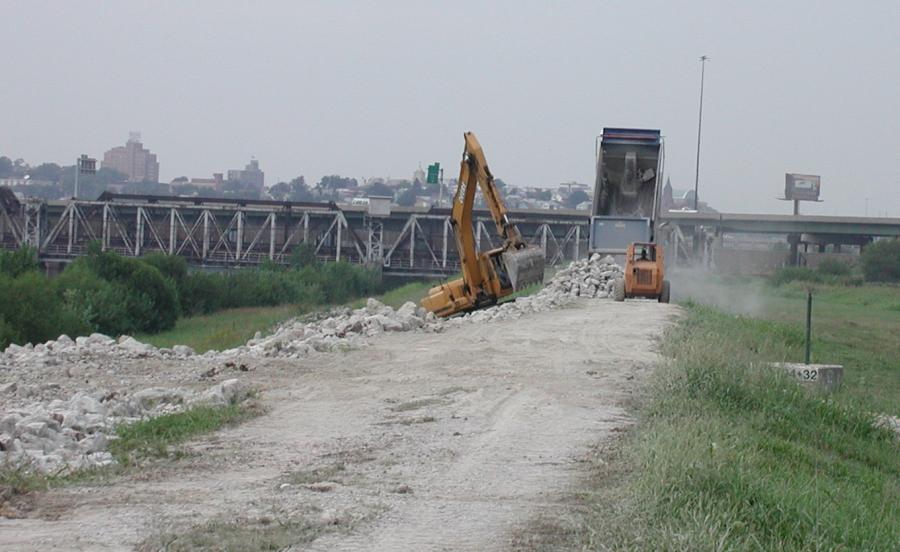 "The local partners and governments do an amazing job of maintaining the pump stations and levee systems," said Mensing. "We inspect them every year and more rigorous inspections are done every five years to ensure they are fully functional. The pump stations were not originally designed to handle the loads of future floods at the new top of levee."

"The immediate challenge will be maintaining the flood protection in the spring while doing the work," he said. "We are replacing two of the pump stations and we have to keep the other two in operation. But the greatest challenge is going to be the overall excavation — digging the wells for both stations that will be 39 feet deep in the ground. This will require de-watering and pumping and we're going to use sheet piling for excavation shoring in the upper 39 feet of excavation. At 39 feet you can't do an open excavation. Sheet piling, shoring and de-watering will create a dry hole for us to do the below grade construction in.

"Any time you work that deep below the surface getting concrete and other materials into the hole, with the limited size of the site, you have to capitalize on ‘on-time' delivery of materials because we don't have available storage areas around the pump stations," he said.

The crews also have to build 600 ft. of levees and floodwalls on either side of the Argentine Main pump station.

"That involves displacing the crown of the levee, moving it to the riverside so that we can work on the landside and maintain the current level of flood protection," said Martin. "We're going to use sheet piling as a temporary flood wall that will tie into our excavations to also maintain flood controls at the current levels." 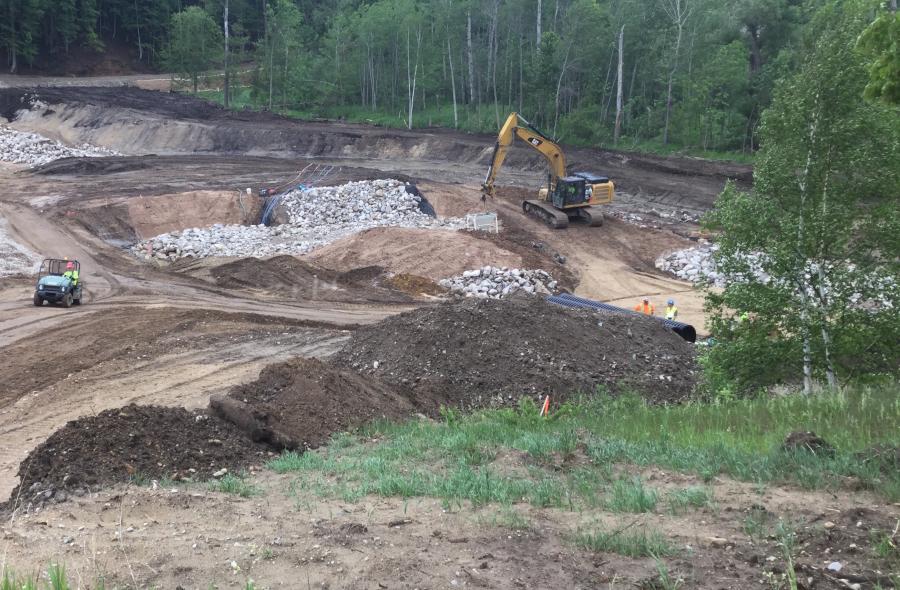 Michels uses Caterpillar and John Deere equipment. The work will require a long stick excavator (a John Deere 450) with machine pilings to dig the holes and a Cat 349 excavator at a borrow pit, which is being supplied by the government; dozers — a Cat D8T and a John Deere 750 and a 450; and a fleet of dump trucks provided by local trucking companies. All equipment will be equipped with the Trimble Grade Control Systems.

"We'll have a full repair staff on-site," said Martin. "All of our repair people are either Cat or John Deere certified and the main wear and tear will be depth of excavating, and encountering water. We do have some abrasives there — high content sand and silt, so a lot of wear and tear will be on the tracks, cans and sprockets."

Michels has a fleet of more than 11,000 units and they are rotated every three years. The corporation purchases equipment from dealerships such as Fabick CAT.

Two small business contracts, totaling approximately $15 million, to repair and modify pump stations along the Armourdale and CID levees were advertised in July and are scheduled to be awarded in September. The final contract, to include the levee and floodwall raises and seepage and stabilization upgrades will be advertised in the Fall and awarded in April 2021.

General contractors interested in bidding on these projects must be registered on SAM (System for Award Management, sam.gov/SAM/). Interested contractors are encouraged to review the contracting instructions posted on the Kansas City District website — www.usace.army.mil/Business-With-Us/Contracting/. Corps project advertisements and solicitations are placed on SAM.gov. 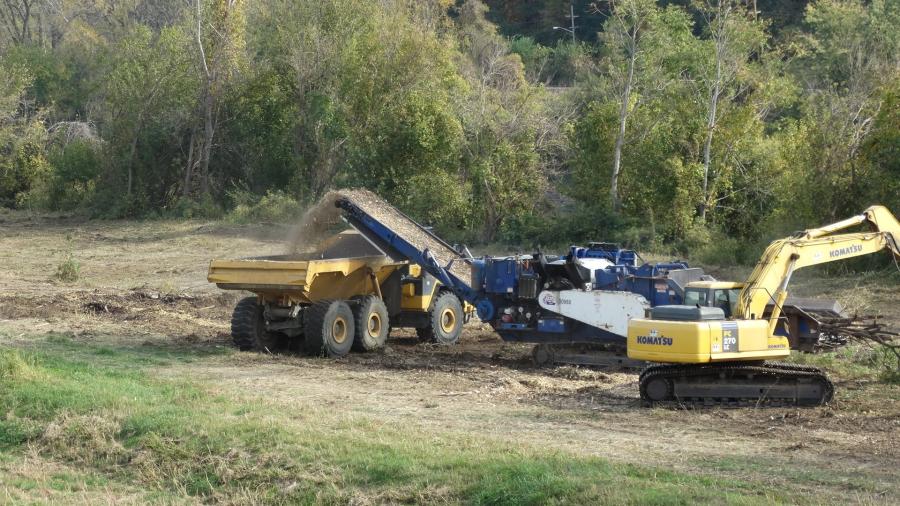 "We have posted the 65-percent design for the large levee and floodwall raise contract on SAM.gov," said Mensing. "We are looking to engage with contractors and industry earlier in the design process so we can better understand, and potentially incorporate, their construction concerns and risks within the final plans and specifications. We are excited to develop relationships with interested contractors and include them in the design process. If a contractor is interested in the levee raise project or has questions, we encourage them to contact the person included in the posting."

ESI Contracting Corporation, between November 2014 and December 2016, completed a $3,985,000 project that upgraded a section of shoreline along the Missouri River portion of the Kansas Citys Levees project that reduced the risk of flooding to the area.

The work entailed the demolition of a 70-ft. tall former grain loading tower and a 450-ft. long sheet pile wharf. Also, installing rip-rap 40 ft. into the water and 1,500 ft. along the shoreline, on a three-to-one grade slope.

"In terms of safety for our crew, we had to deal with high water/fall protection and unstable banks," said Alan Wolfe, ESI's general manager, who oversaw the project. "Free and open coordination with local sponsors and USACE was critical to our success, and we're looking forward to participating in future projects for the levee system."

ESI began its operations with the demolition of the tower, completed in six weeks.

"We coordinated this work with the local sponsors," said Wolfe. "We had a secure site and removed debris daily. The wharf demolition was carefully planned and executed in 60 days. The debris was immediately placed in containers for removal." 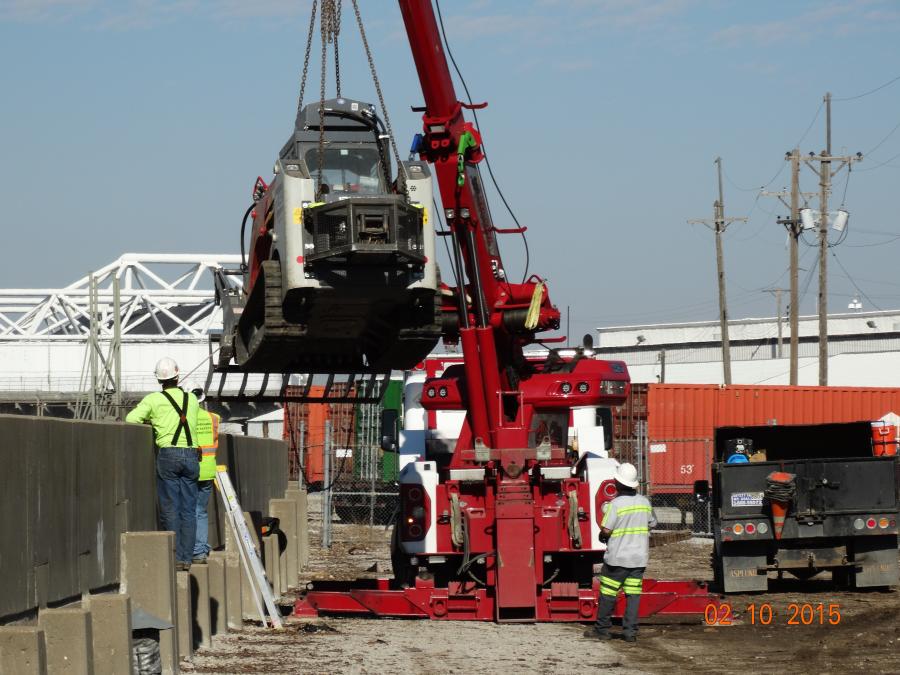 To place the rip-rap for the underwater section, crews performed excavation and placement of stones for stabilization. ESI partnered with W.A. Ellis Construction as the marine subcontractor for this portion of work.

To create the slope and install the above-water section, a considerable amount of earth work was required.

"We commenced excavation from top of slope down to the waterline and then we placed rip-rap and bedding immediately after excavation," said Wolfe. "We completed this portion in approximately two months."

All the ferrous and non-ferrous metals from the demolition were recycled.

Peak days had 12 to15 construction workers on-site, which included employees from W.A. Ellis and Belger Crane, which provided the hoisting services for the grain tower demolition.

"We had few equipment issues, other than normal wear and tear and this was aided by daily inspection by the operators," said Wolfe.