Utah Seeks $1.9B From EPA to Clean Up Mine-Waste Spill 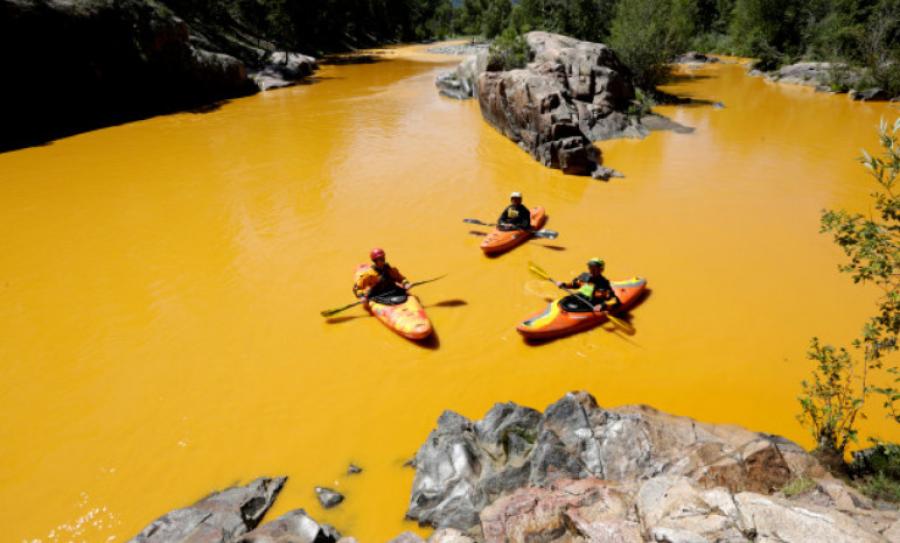 People kayak in water colored from the mine waste spill. (Jerry McBride, The Durango Herald photo)

Utah is asking the U.S. Environmental Protection Agency for $1.9 billion in damages after the EPA inadvertently triggered a multi-state spill from an old gold mine in Colorado, the Utah Attorney General's Office confirmed.

The state filed the claim in February but never publicly announced it, said Dan Burton, a spokesman for the attorney general. Word of the claim first surfaced Aug. 4 when the EPA made a passing reference to it in a news release.

It is by far the largest known claim stemming from the August 2015 spill from the inactive Gold King Mine in southwestern Colorado, and it brings the total to at least $2.3 billion.

The Navajo Nation filed a claim for $162 million and the state of New Mexico sought $130 million.

Burton initially declined to say what Utah's claim included or how state officials arrived at the $1.9 billion figure but said details would be released later.

“It's a function of looking at the damages, and the cost of cleanup and the long-term maintenance in the area,” he said.

Asked why the state had not made the claim public earlier, he said, “I think our general policy has been to solve the problem and take care of it” rather than create a media stir.

An EPA-led contractor crew was doing exploratory excavation at the mine in preparation for a possible cleanup when workers accidentally breached a pile of debris that was holding back water inside the mine.

About 3 million gallons of wastewater spewed from the mine, sending a mustard-color plume of pollution into waterways in Colorado, New Mexico and Utah. Indian lands also were affected.

Compensation for damages has been a contentious issue. At least 144 government agencies, businesses and individuals filed claims for lost wages and income, crop damage and other losses.

The EPA accepted responsibility for the spill but said in January that federal law prevented it from paying any damage claims.

That brought down vehement criticism from members of Congress and local officials. EPA Administrator Scott Pruitt, who took over the agency after the election of President Donald Trump, promised to reconsider the decision.

On Aug. 4, Pruitt said the EPA would review at least some of the claims. But the EPA said the law prevented it from reconsidering claims from anyone who had filed a lawsuit against the federal government. That ruled out a review of claims filed by New Mexico and the Navajo Nation, which have sued.

Utah also filed suit, but it named mine owners and EPA contractors as defendants, not the government.

New Mexico Environment Secretary Butch Tongate said he was optimistic his state's lawsuit would be successful.

The EPA did not respond to emails asking how it would pay for any damage claims it accepted or any court judgments it was ordered to pay. The White House has proposed slashing EPA's budget by 31 percent, to $5.7 billion.

After the spill, the EPA designated the Gold King and 47 other mining sites in the area a Superfund district and is reviewing options for a broad cleanup.