Utahraptor State Park Under Consideration at Cost of $25M 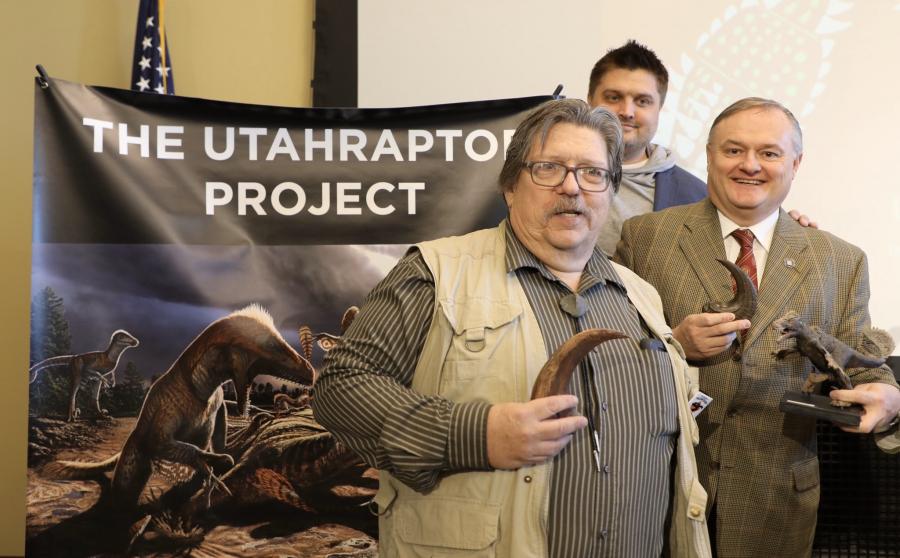 ST. GEORGE, Utah (AP) Arches National Park may soon have a new neighbor due to a new bill heading through the Utah legislature.

"Utahraptor State Park," proposed by Rep. Steve Eliason (R-Sandy), would be a new recreational area in Moab and Utah's 44th state park, comprised of 6,500 acres including trails of every kind and campgrounds, the Spectrum newspaper reported.

"This bill has been over 100 million years in the making, and its time has come," Eliason said.

Named after the state dinosaur, the park would be set in the Dalton Wells area, about 15 mi. northwest of Moab and near a huge deposit of dinosaur bones in eastern Utah. According to Jim Kirkland, the state paleontologist, there are more dinosaur bones in this area than in Dinosaur National Monument.

The Utahraptor was first unearthed in the Dalton Wells area in 1975, where 10 other Utah-exclusive species have been found.

Grand County submitted a unanimous resolution in full support of the park, stating it would be economically, historically, scientifically and recreationally advantageous for the area.

The proposed park is already on some state-owned land, in addition to State of Utah School and Institutional Trust Lands Administration (SITLA) land, and would include about 80 campgrounds with full hookups.

The park comes with a hefty price tag that stalled its passage in the past session.

For property acquisition and construction, Utahraptor State Park would cost $25,659,800, with ongoing costs priced at $448,500 per fiscal year. Eliason said this could be "flexible" due to a potential land trade with SITLA, putting the total approximately $15 to $20 million.

As it stands currently, this is set to be drawn entirely from the general fund of taxpayer money.

Opponents to this bill in the house and senate have taken issue with the price.

In the fiscal note attached to the bill, the park would generate $34,200 for the county per year while charging up to a $25 entrance fee and $40 for camping.

Eliason testified in committee that his co-sponsor, Sen. David Hinkins, spoke with someone representing the National Park Service who is in support of the park, noting specifically the opportunity for a separate entrance into Arches and more campground space.

Arches, which saw record-breaking visitation last year and exponential growth the past few years, is grappling with the effects of overtourism and traffic.

"The area is being loved and used very inappropriately," Rep. Christine Watkins (R-Price) said. "This truly is a treasure in our state, it goes beautifully with Arches and all of the things that we love and the world loves in that area."

Eliason said the area is currently plagued by disorganized camping and litter, which could be solved by making it a state park.

The area would also include the Moab Isolation Center and Dalton Wells Civilian Conservation Corps Camp, the historical site of Japanese internment during World War II.

The bill, H.B. 257, would also create the "Lost Creek State Park" in Morgan County around the Lost Creek Reservoir near Croydon.