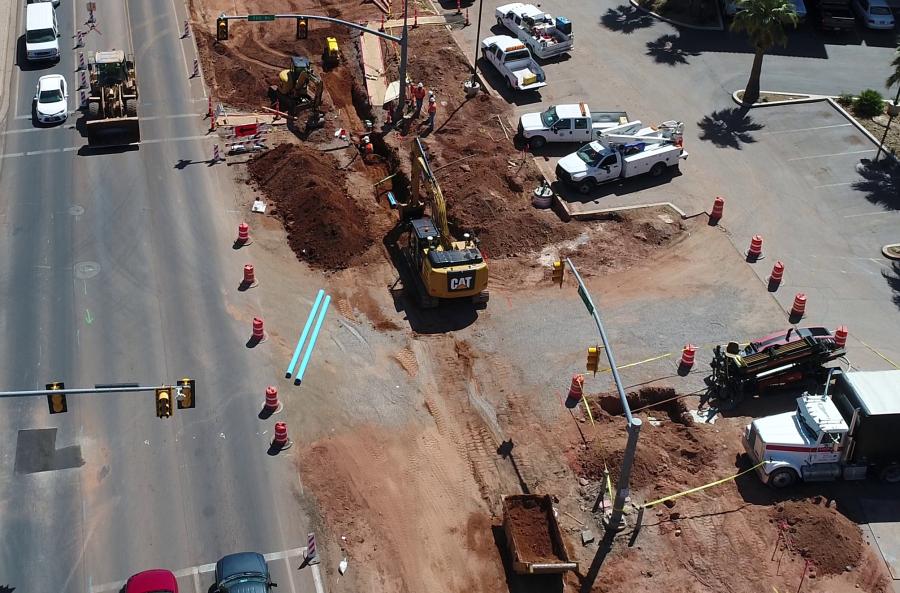 Bluff Street (SR 18) in St. George, Utah, is a highly-traveled roadway tasked with carrying an increasing load as the population in the area continues to grow. More than 44,000 cars per day travel the route and this number is expected to grow to 65,000 by 2040. To address this need, the Utah Department of Transportation (UDOT) completed an environmental study in March of 2015 to evaluate various transportation options. Through careful analysis and close coordination with the local communities, a solution was identified which met transportation needs while minimizing impacts.

The $51 million project (including acquisitions) is funded primary with state money and $1.8 million from local government sources. The four-fold undertaking includes: 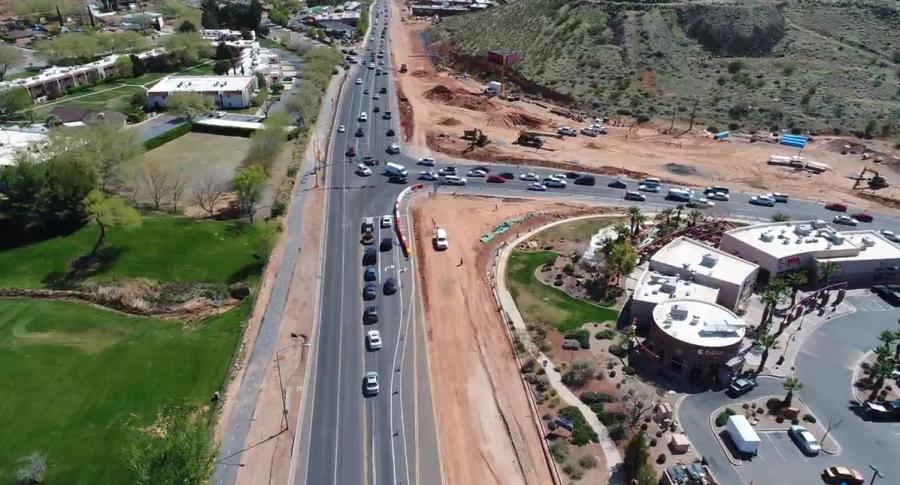 These upgrades will provide flexibility to accommodate future expansion as growth dictates and save money which can be allocated to other road projects in the area. Pedestrians and cyclists will have safe access to a new trail system in the area with a pedestrian box culvert under Bluff Street.

SUE Solutions, a subsurface utility engineering company in Lehi, was hired to coordinate with all the utilities and obtain schematic mapping from them. The engineers take the schematic information and physically locate the utilities in the field. Test holes are drilled on-site to pinpoint each utility in various spots to establish a vertical profile. By doing research prior to construction, the contractor is given the vital information to construct the roadway with no unplanned service interruptions to customers in the area.

ACC Southwest recently finished construction of a bridge widening on I-15 over the Virgin River just south of this project, and also reconfigured an intersection on St. George Boulevard (State Route 34) at 1000 East. For the Bluff Street project, ACC is working on the water and sewer lines, new storm drain, excavation and grading.

At the end of March, the project hit the 25 percent milestone with the completion of the new sewer and water lines around the intersection of Sunset Boulevard and Bluff Street. The project is on schedule to be finished in November of this year.

According to UDOT, the project is going well and keeping on schedule overall. Two change orders have been processed, one for traffic lights being centered over traffic lanes and another to transport state furnished materials from Salt Lake City to St. George.

“We have found some contaminated soil that needed to be removed to the land fill. Coordination of multiple utility companies has been key to overcoming challenges,” said Kevin Kitchen, UDOT communication manager. “We have also identified several water seeps [springs] that have caused some minor delays while they work around them. These are the greatest construction challenges encountered up to this point.”

UDOT resident engineer Ray Bentley said he has been working very close with city of St. George Public Works Director, Cameron Cutler, whenever city approval or help is needed. He said they have been great to work with. He also noted the water, power, parks and sewer representatives have all been coming to the partnering meetings and/or helping with their parts.

Installation of the new gas line, which began at 100 South, will be completed in April. Flare Construction of Coalville was brought in because of its expertise with this type of piping.

UDOT reported that work on the 42-in. storm drain is progressing well. ACC crews are working in the 300 North block and will install about 150 ft. of pipe per day — weather permitting. The new storm drain will keep the road clear of water during times of heavy rain. There are approximately 5,000 linear ft. of storm drain to be installed along the corridor. 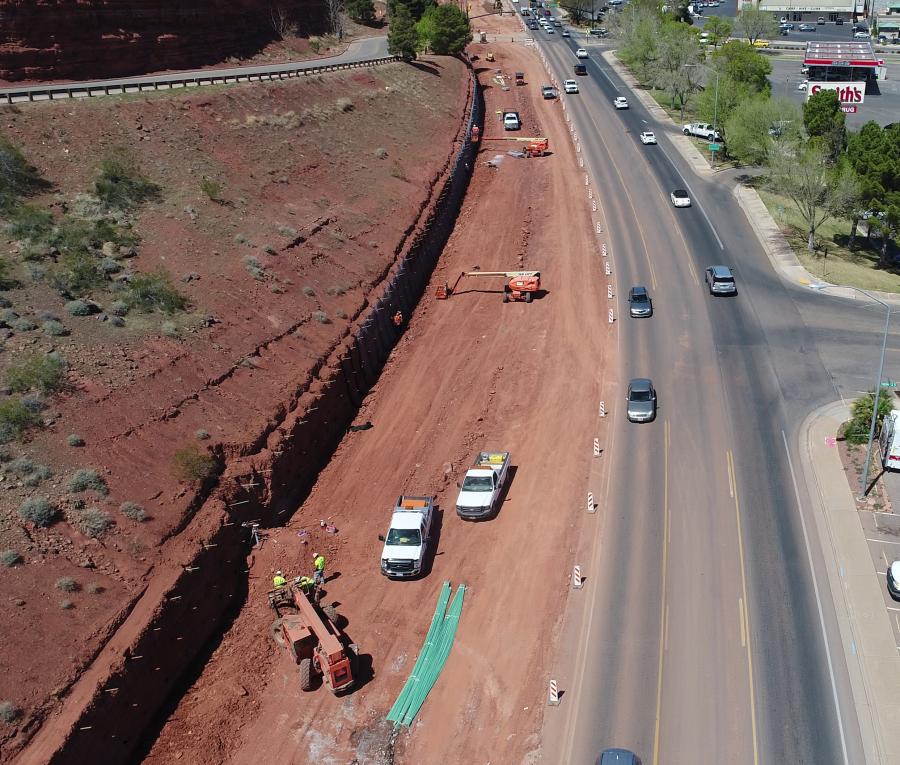 Installation of the soil nail wall from the corner of Airport Road and Bluff Street along the west slope to 100 South is continuing. Long, steel soil nails are drilled into the rock face of the slope to stabilize the area and prevent future erosion. Malcolm Drilling Company Inc. of Salt Lake City will install up to 43 soil nails along this stretch of embankment.

Another slope protecting wall is under construction just south of the Bluff Street and Sunset Boulevard intersection on the west side of Bluff Street. This area will be fortified with steel rods and mesh, which is then pneumatically sprayed with shotcrete, a concrete mixture. These measures will protect the area from future slope erosion.

New signal and lighting foundations are being installed by Tri-State Electric & Utility, Inc. of St. George. The whole corridor will get a new Advance Traffic Management System from Safe City Systems (SCS), which will help with traffic flow and safety.

ACC continues to move material to create the new alignment for the intersection of Bluff Street and Sunset Boulevard. The new alignment shifts the intersection to the southwest. Western Rock Products, another St. George local, will be laying the pavement, and Kokopelli Landscape, based in Mesquite, Nev., will wind up the venture with landscaping. When the project is complete, all utilities in the area will be modern and are expected to last 30 to 40 years.

ACC also is working to maintain driveway and road approaches through the project. Due to the recent rain in the area, rock and road base have been added to several of the approaches to help with mud. With the amount of traffic traveling and accessing properties along the corridor, these crews are constantly busy.

During the 1930's, the St. George Civilian Conservation Corps (CCC) Camp #2558 was located on the area now occupied by the Red Hills Golf Course. Archaeologists from Bighorn Archaeological Consultants are monitoring construction activity along the western edge of the golf course and will be available to further investigate in the event of any subsurface discoveries.

The Bluff Street Corridor Project is an integrated improvement enhancing the way citizens connect and use the Bluff Street Corridor whether by auto, public transit, cycling or walking. At the current growth rate in the city of St. George, engineers estimate that once these changes are complete, additional transportation expansion in the area would not be necessary until 2030.