Vandals' New Digs Will Be 'Game-Changer' for Athletes 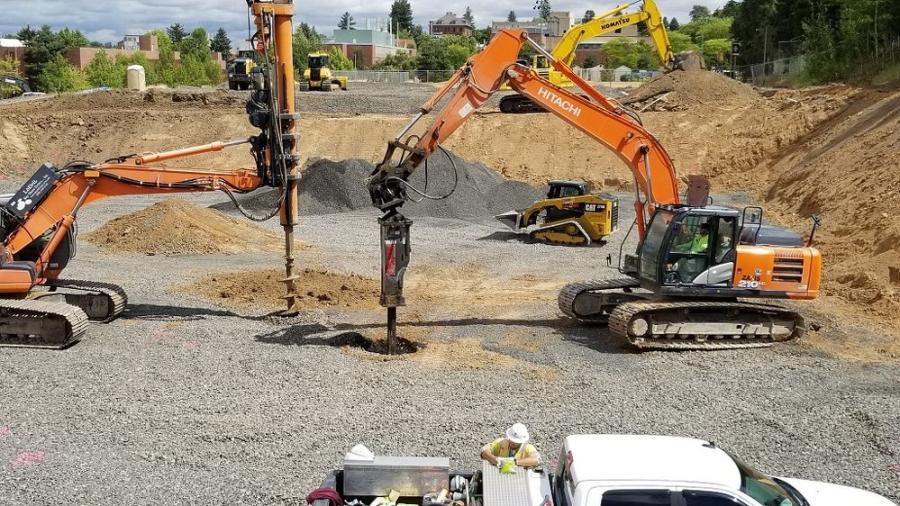 Work is expected to be completed by August 2021. “Good geotech data” is keeping the contractor on track with the schedule.

After years of planning, the University of Idaho has finally broken ground on a dedicated basketball arena. Scheduled for completion in 2021, the 62,000-sq.-ft. Idaho Central Credit Union Arena will be the new home for Vandals' basketball, regional tournaments, lectures, as well as "small and mid-size" events, other cultural and special events, concerts and conventions, said Guy Esser, project architect of the University. In addition to the court, the new arena also will include a practice gym, lockers and conference facilities and coaches' offices.

Ground broke in June 2019 on an area of campus north of the ASUI-Kibbie Activity Center on the Moscow campus — an area set aside for such an expansion in the 1970s, Esser said. The open grass playing field was "not a well-used area," but was adjacent to parking and used only for intramurals, thus lending itself to the plan for a new arena that will seat 4,200.

Of a $51 million budget (following a State Board-approved budget increase), $43 million has been collected, largely through fundraising efforts in addition to a $10 million gift from Idaho Central Credit Union.

Site prep started with digging 14 ft. down to place the footings, and dirt hauled to offsite locations. The concrete footings along the south, lower section of the seating bowl have been poured, as have the large footings for the main roof portal truss.

Excavation and subgrade preparation for the east shear wall footings and the east exterior wall of the practice gym has been completed, but excavation continues at the west end of a parking lot for the placement of a steam/condensate vault while Heritage Landscaping works on various repairs to the irrigation systems. Formwork has started at the east practice gym footings. 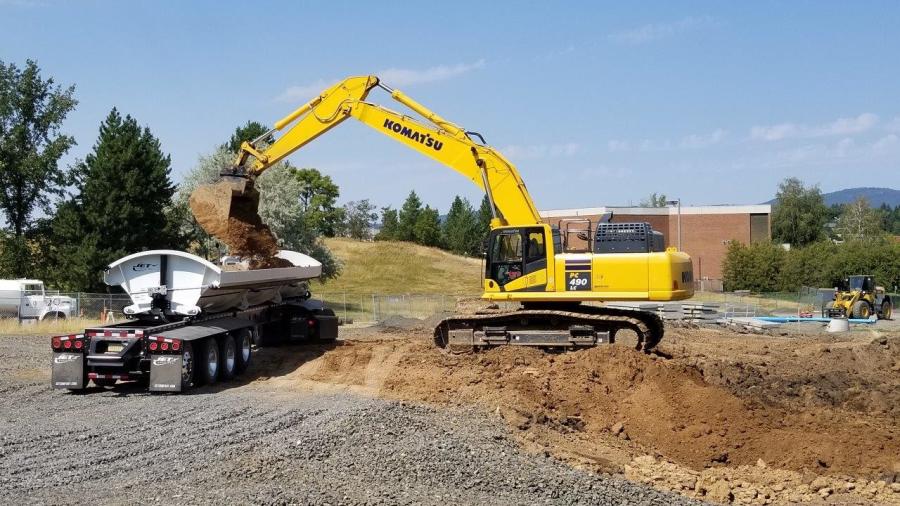 The contractor is coordinating opening and sleeve locations in preparation to pour these tower sections in late October. Rebar bending, fabrication and placement is in progress at various footing-to-foundation wall connections throughout the west lower areas of the project site. Placement of under-slab drainage piping and mechanical/electrical utilities is expected to start by the end of October.

The next step is steel erection. "It will be slab on a metal deck," said David Shourd, project manager of Hoffman Construction, based in Portland, Ore., one of the largest general contractors in the United States.

Once the frame is in place, crews will place the roof to "keep things protected," Shourd said, and install the exterior skin, curtain walls and cladding before focusing on the interior finishes.

Crews will use rough-terrain cranes (30-to-40 ton) for concrete work and the sheer walls. But the building's frame is the most unique aspect of the project. In the spring, 150-to-200 ton cranes will be used for mass timber erection.

When the arena is completed, UI will have the first mass-timber sporting facility in major college athletics. The mass-timber framing style features the use of large, solid wood panels for wall, floor and roof construction, as well as innovative forms of sculptural buildings like the ICCU arena, formed from solid wood panel or framing systems of 6 ft. or more in width or depth. The primary load-bearing structure is made of large pieces of either solid or engineered wood.

"The genesis of this project was the idea of using mass timber," Esser said. "It's a natural product and an up and coming building technology. We want to spur industry growth." Mass timber construction aids in forest management, supports logging communities, contributes to a more sustainable building sector and encourages development in wood engineering.

Additional benefits of mass timber construction include reduced weight in comparison with concrete buildings by as much as one-fifth. This enables smaller foundation sizes and, due to high strength-to-weight ratios, better performance during seismic activity.

Replacing steel with mass timber also reduces carbon dioxide emissions between 15-to-20 percent. Because the timber panels are prefabricated and assembled on site, project timelines are shortened by an average of 25 percent, construction traffic is reduced by 90 percent and sites are safer.

Because of its sustainability and other benefits, mass timber is being used more in the United States. in larger buildings than typical stick-built designs permit.

"ICCU Arena is a showcase for who we are and what we do as a land-grant research university," University of Idaho President Chuck Staben said in a press release.

The intent, Esser adds, is to use timber from the Idaho forest industry. Much of the wood will be harvested from the UI Experimental Forest on Moscow Mountain and then manufactured and hauled to campus by Idaho companies. 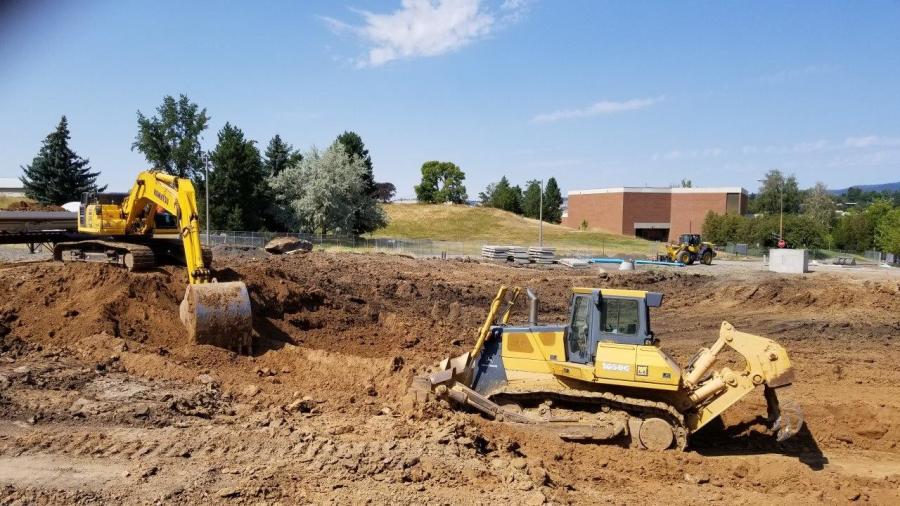 Boise Cascade Co., a North American manufacturer of wood products and wholesale distributor of building materials, is responsible for the beams. PotlatchDeltic Corporation, an American diversified forest products company based in Spokane, Wash., that manufactures and sells lumber, panels and particleboard, is handling the plywood.

Mass-timber framing is an old technique often thought of in the creation of very tall buildings, but it's seldom seen today, primarily due to building codes. Esser said that the University underwent extensive fire modeling to ensure that the timbers would perform equal to or better than other materials. "Mass-timber construction must meet the same requirements for steel: sprinklers, evacuation routes, etc.," he said.

According to Think Wood, exposed mass timbers char on the outside, forming an insulating layer that protects interior wood from damage. In addition, if code requires mass timber to be protected with gypsum wall board, "the mass timber can achieve nearly damage-free performance during a contents-fire burnout event."

The heavy timber framing will feature thick beams, most of which are 12-3/4-in. thick by 48 in. tall, although, according to Shourd, some are 14-3/4-in. thick and 72 in. tall. "Several million board feet" will be required to complete the project.

In addition, 2,800 glulam pieces will be used. Glulam is glued laminated timber, a type of structural engineered wood. By laminating several smaller pieces of lumber, a single large, strong, structural member is manufactured.

Round wood from Idaho cedar will be used for the cladding, curtain walls and mullions.

The overall design was created by Opsis Architecture to showcase regional wood and Hoffman Construction was specifically chosen for its experience and because of its chosen partners' experience — StructureCraft, an engineer-build company in Vancouver who is responsible for the structural engineering, pre-fabrication and installation of the long-span timber roof structure. Hastings & Chivetta designed the interior and KPFF served as consulting engineers.

"They have lots of experience not just in working with mass timber, but also in costing, sourcing and erection sequencing," Esser said, adding that after completing the design of the arena in 2017, they ran an RFP to find an experienced contractor. "We wanted the insight on methodology."

Although mass timber is relatively new to the U.S. construction industry, Hoffman has used it before. It also has a history with the client, Shourd said, and has been involved with this project for years. 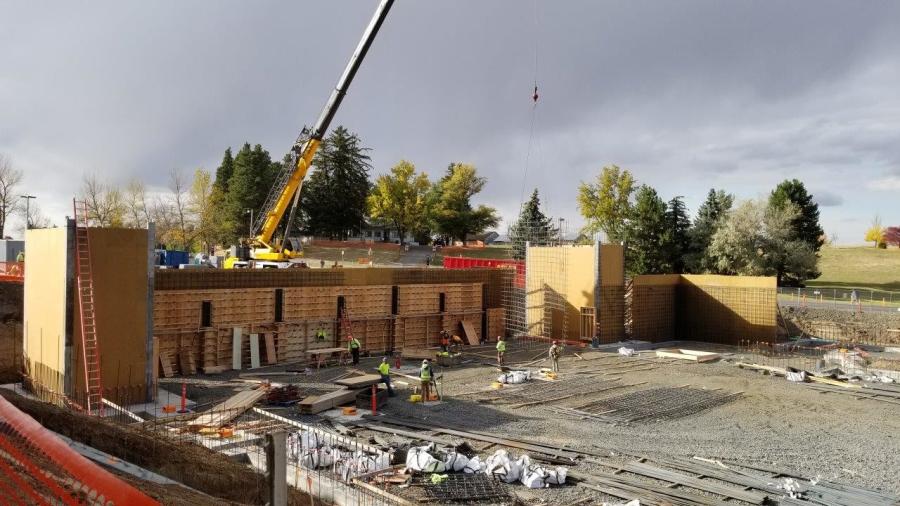 Over that period of time, Shourd said there have been few surprises, probably because communication and planning have been so thorough. With the new arena situated near academic and athletic facilities, a great deal of attention has been paid to pedestrian routing and game day plans. "Since we're next to the ASUI Kibbie Activity Center, we have to be flexible and respectful."

Idaho saw early snow this year and winters can get quite cold, but allowances have been built into the schedule for weather as well as for campus activities.

Work is expected to be completed by August 2021. One thing keeping them on track with the schedule is "good geotech data." Shourd said the "soils are better than the boring reports indicated" and that the ground is dry, so excavation has been able to proceed uninhibited.

"This facility will be a game-changer for student-athletes, for our fans and for our community," UI President Staben said.