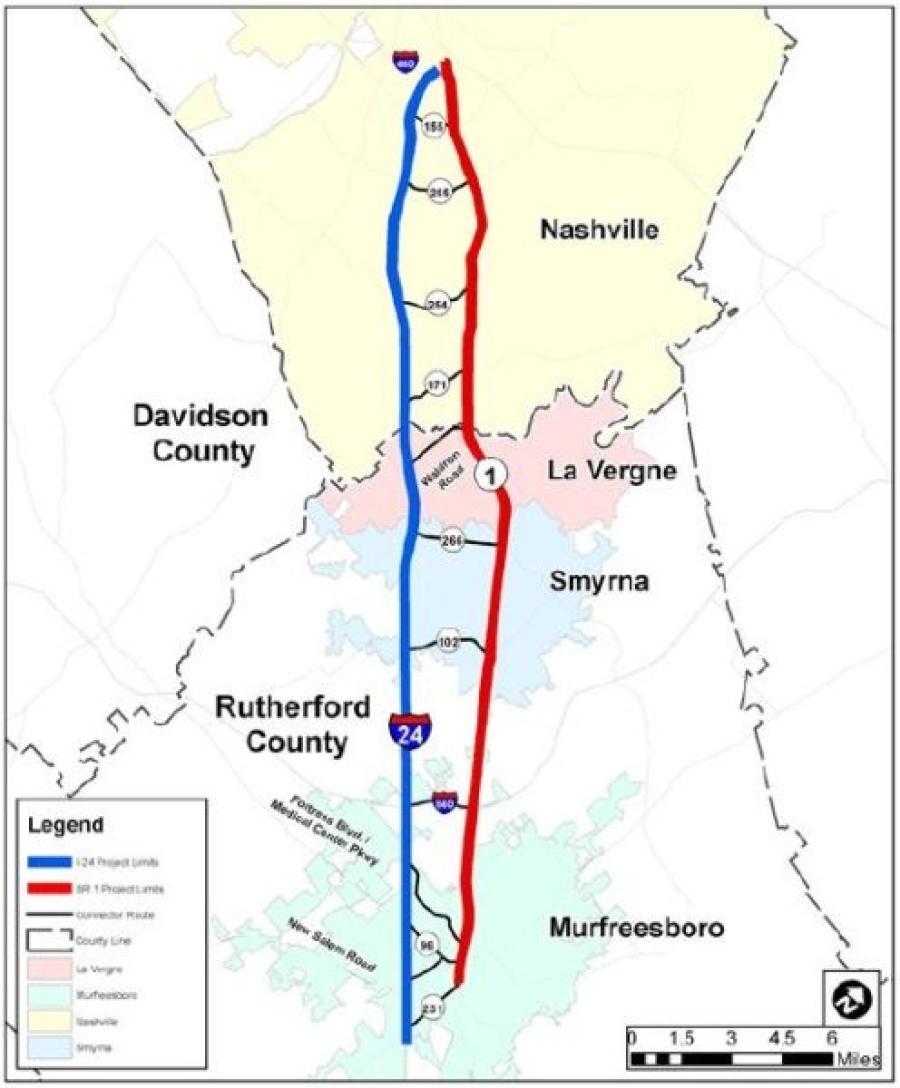 Location of I-24 Smart Corridor (Tennessee Department of Transportation photo)

The flip side of all that expansion, however, is that traffic has increased by a whopping 60 percent since 2005 along the area of I-24 that connects Nashville southeast to Murfreesboro, the fastest growing city in Tennessee.

Today, Nashville itself is the 19th most congested city in the United States.

To manage the dramatic increase in traffic caused by the growing number of cars on the road and the corresponding frequency of incidents, a group of collaborators from Vanderbilt University, the Tennessee Department of Transportation (TDOT) and the Southwest Research Institute (SWRI) has been awarded more than $2.6 million from the U.S. Department of Transportation (USDOT) to improve the effectiveness of Integrated Corridor Management (ICM) systems like the ongoing, multiphase I-24 Smart Corridor project.

The grant is being matched by TDOT, bringing the project's total funding to $5.2 million.

Dan Work, associate professor of civil and environmental engineering and electrical engineering and computer science, is leading Vanderbilt's participation in the project, administering $1.5 million of the total grant award to develop an Artificial Intelligence (AI)-based decision support system (DSS) to manage traffic on the I-24 Smart Corridor.

The goals of the project are to diminish traffic and rush hour delays to make it easier to drive along the routes, to reduce the concentration of collisions and to develop agency coordination.

The USDOT grant was one of several it awarded to improve highway projects across the country through its Federal Highway Administration (FWHA). In a news release, FWHA Administrator Nicole R. Nason commented, "The program selections this year aim to benefit communities across the country by improving safety and efficiency on our roads through the deployment of advanced technologies. Tennessee's project is unique in providing other states with a roadmap for the implementation of similar ICM corridors at an accelerated pace."

In lieu of the expensive traffic simulation models and time-intensive maintenance required to ensure that ICM models are accurate and effective, Work and his team — including Janos Sztipanovits, Vanderbilt's E. Bronson Ingram Distinguished Professor of Engineering and director of the Institute for Software Integrated Systems (ISIS); Craig Philip, research professor of civil and environmental engineering and director of the Vanderbilt Center for Transportation and Operational Resiliency (VECTOR); and Eric Hall, computer science staff engineer — will develop an ICM DSS powered by artificial intelligence.

"Using AI allows us to continuously improve how traffic is managed using all of the traffic data available on the corridor," said Work, also an associate professor at ISIS. "The AI DSS can harmonize large quantities of traffic information from radar, CCTV and Bluetooth readers on I-24 so that the goals of the ICM can be better measured and met."

"This project is an opportunity to meaningfully change the lives of our neighbors and be a model for how other cities can leverage AI to become smarter across the U.S.," added Sztipanovits. "Traffic impacts everyone's day to day life, and if we can use integrated systems to make that better, we'll have done good work."

To manage traffic incidents, the system will deliver response plans to address primary traffic incidents and deliver appropriate lane guidance to drivers near the accident to mitigate secondary collisions.

The project builds on previous Vanderbilt/TDOT partnerships to develop predictive analytics related to car crashes and to add 4K cameras along the corridor, and Work's team has extensive experience deploying AI-based systems with other partners.

"This project is a civil engineer's dream," said Philip. "The research that VECTOR has been doing over the years in concert with our team's technological expertise have put us in the best possible position to execute our work successfully. Highways are the circulatory system of the country moving people and goods across the country, and this section of I-24 will benefit immensely from a tech-enabled ICM."