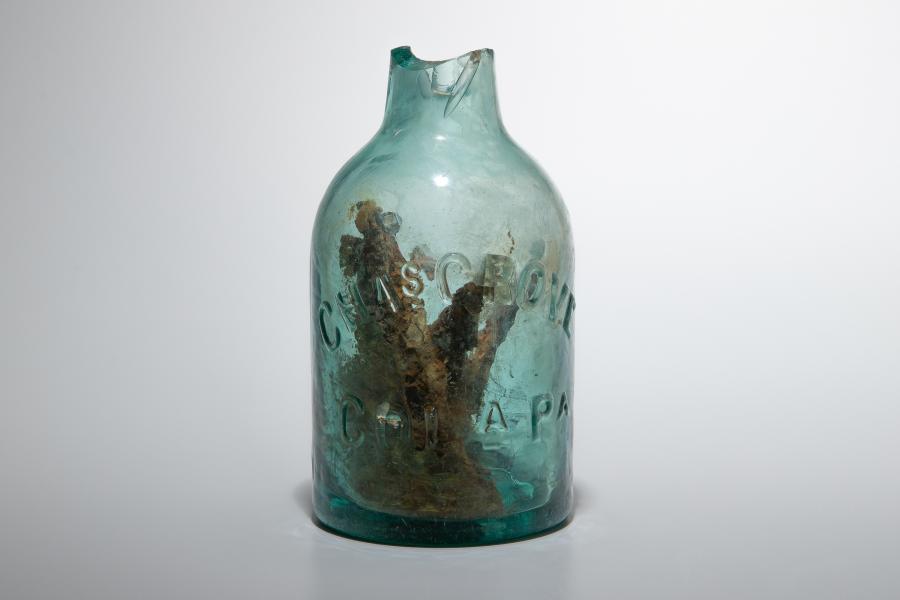 Though damaged, the cask and contents were intact, having been preserved by the dirt dumped when the interstate was first constructed. (Robert Hunter/William & Mary Center for Archaeological Research photo.)

Prior to joining the Virginia Department of Transportation in March 2019, Chris Shephard, the agency's Richmond District archaeologist, made a "bewitching" discovery during the Interstate 64 widening project.

Shephard was part of a team from the College of William & Mary conducting an archaeological excavation of a Civil War fortification near Williamsburg in 2016 when they uncovered a "witch bottle", the same one that has recently gone viral on the internet.

Though damaged, the cask and contents were intact, having been preserved by the dirt dumped when the interstate was first constructed. It was discovered in the median of the interstate between Exits 238 and 242 in the Hampton Roads area.

Witch bottles are folkloric artifacts that were often buried or hidden in houses to ward off evil spells or witchcraft.

Shephard said the bottle may have been used during the Civil War to store nails to set up the Union Army's camp at Redoubt 9, a small fort originally built by Confederate troops. But a member of Shepard's crew, based on his own knowledge of folk traditions and witchcraft in colonial Pennsylvania, suggested it may be a witch bottle

"There is compelling evidence, as the bottle was found buried upright near a brick hearth with a nest of iron nails inside [similar to other bottles]," he said. "There are ample written accounts of these practices in America and Europe and examples have been found archaeologically.

"On the other hand, all we have in this particular bottle are nails. If there was a cork on the bottle it disintegrated long ago in the acidic Tidewater soil, and any organic materials that may have been in the bottle are long gone."

Still, Shephard remains skeptical about the artifact's purpose. A witch bottle is a deeply personal item, he explained, which are atypical in longer-term encampments.

"Soldiers likely spent most of their time in permanent accommodations in town, where they kept their personal effects," he continued. "A rarely manned outpost that never saw action after it was taken by the Union seems an unlikely place to bury a witch bottle, but I can't say what was in their heads."

Though his team didn't have time for further research, the item is still one of fascination and may be revisited by other archaeologists.

"The great thing about archaeology is that in circumstances where the evidence points you in multiple directions, it is okay to have multiple interpretations."

The Interstate 64 Widening Project in the Richmond and Hampton Roads regions will increase vehicle capacity, resulting in immediate congestion relief along one of the most heavily traveled and congested highway corridors to and through the Virginia Peninsula.

Divided into three segments, the Hampton Roads improvements include widening this section of I-64 from four to six lanes for approximately 21 miles. State engineers estimate the work will be finished in late 2021.