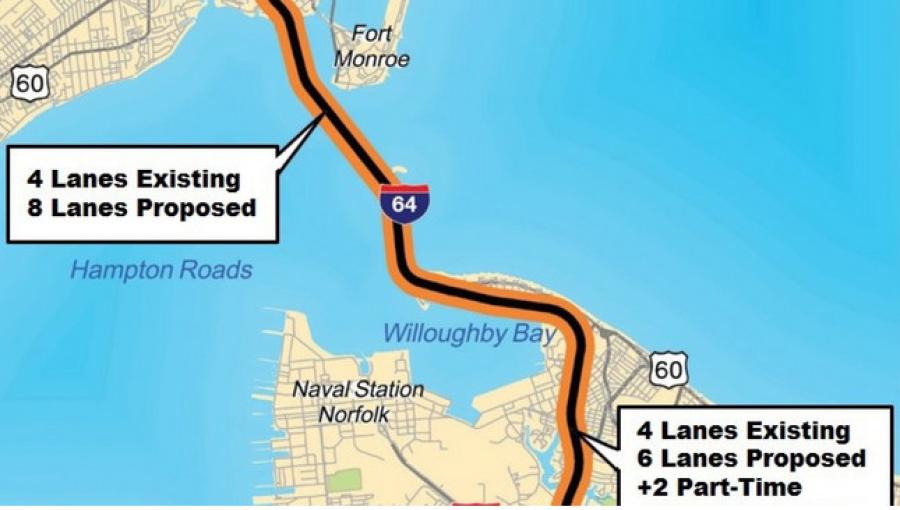 Construction crews have been busy prepping the South Island of the Hampton Roads Bridge-Tunnel (HRBT), and the roads leading to it, for the largest transportation project in the history of the Virginia Department of Transportation (VDOT).

The massive $3.8 billion expansion will add two new tunnels, replace or rebuild more than two dozen marine bridges, widen the I-64 corridor and add new lanes and a shoulder in each direction of the interstate highway.

The VDOT is currently waiting on state and federal permits, a joint permit, and anticipates having them in hand by August. The project is expected to be completed in November 2025.

Paula Miller, VDOT communications manager of the HRBT project, said the prep work is slightly ahead of schedule and has seen no slowdown during the coronavirus pandemic.

"This project hasn't missed a beat," she reported recently. "We've been working through COVID-19. They've been working on the island, some of the early work, and maintaining social distancing and wearing masks throughout the process."

The HRBT expansion project will span 10 mi. of interstate from Hampton to Norfolk. The addition of twin, two-lane bored tunnels west of the existing tunnels will accommodate four lanes of traffic for a total of eight lanes of capacity across the Hampton Roads channel.

The project is meant to ease major traffic jams that can be backed up for several miles during the peak summer season.

"This project will help alleviate a lot of that congestion," Miller said. "It'll improve safety, travel time, reliability, and help us move commerce. There are a lot of benefits to this long, overdue project."

In April 2019, the Commonwealth of Virginia signed a comprehensive agreement with Hampton Roads Connector Partners (HRCP), the design-build contractor for the project.

"We're excited. People are saying, 'How fast can you build it?'" she added. "We need the capacity. We need to be able to move more vehicles."

Work along the interstate is expected to start this fall. All lanes will remain open for drivers, but VDOT is asking people to be mindful of construction workers along the roadway.

To minimize long-term disruption to the region, work on the tunnel, bridges and interstate will be done simultaneously.