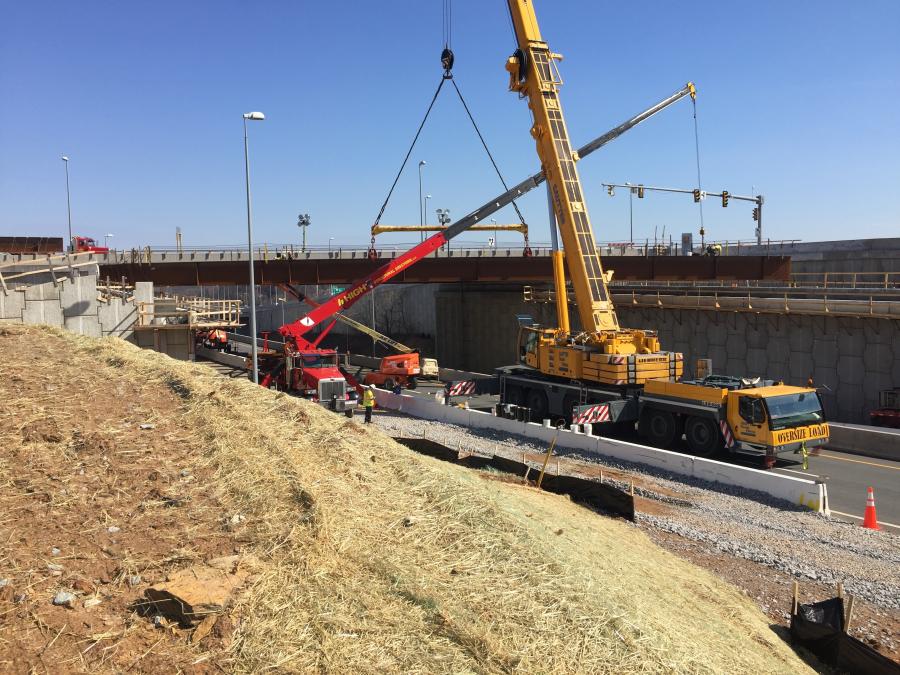 The plan is to partially open the road to traffic in late 2018, with final completion expected in late 2019.

“This project, in cooperation with Fairfax County, will provide an important new link to Route 123 over the Capital Beltway [I-495] for commuters and visitors to Tysons,” according to the project web page. “The link will improve local traffic and access for drivers, as well as provide a vital option for area bicyclists and pedestrians.”

The project includes: a new roadway from the interchange of the I-495 express lanes and Jones Branch Drive to Scotts Crossing Road; improvement along the access road from Jones Branch Drive to the express lanes, as well as along Scotts Crossing Road; two travel lanes and on-street bike lanes in each direction; three bridges over the I-495 express and general-purpose lanes; eight- to 12-ft. wide lighted sidewalks; landscaping and other streetscape amenities; and a wide, raised median to accommodate the future transit. 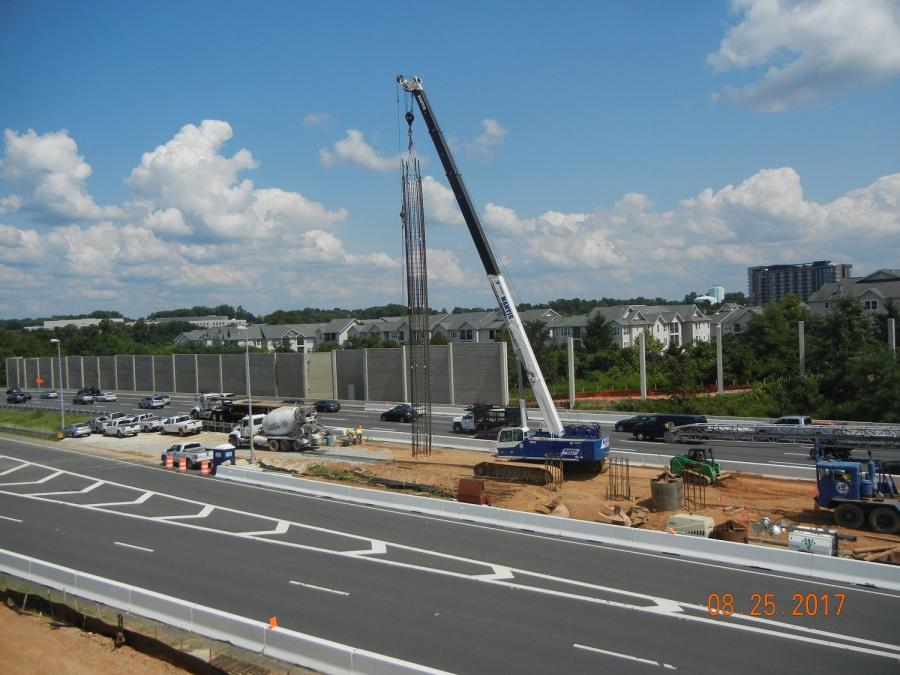 “By providing an alternate route across the Beltway and linking the Tysons East and Central areas, the Connector is expected to relieve traffic along Route 123, at the I-495 interchange and at other congested intersections,” the web page said. “The road is expected to carry more than 32,000 vehicles per day by 2040.”

Fairfax County has been planning this project since 2011.

“There can be no direct comparison of drivers' experiences before and after the project as it is literally creating a brand-new connection in Central Tysons,” said Ellen Kamilakis, a VDOT senior public affairs officer. “Before the project, drivers had to navigate several roads before connecting to Route 123. Planning for multiple transportation modes was successfully achieved through a close working partnership with Fairfax County, who designed the project, and other stakeholders. VDOT's Northern Virginia District encompasses four counties, and the agency works hand-in-hand daily with local transportation agencies.”

The project is being completed through a combination of federal, state and county funds. Fairfax County led design and development, with VDOT managing the construction process.

The design was prepared by Johnson, Mirmiran & Thompson.

“The bridges and walls are designed to meet VDOT design guidelines and standards,” said Kamilakis. “As such, they are expected to have a service life of 75 years. Pavements, including sidewalks, will require normal periodic maintenance to exceed the 75-year service life. It is not unusual for drainage and other utilities to remain in service beyond 75 years. 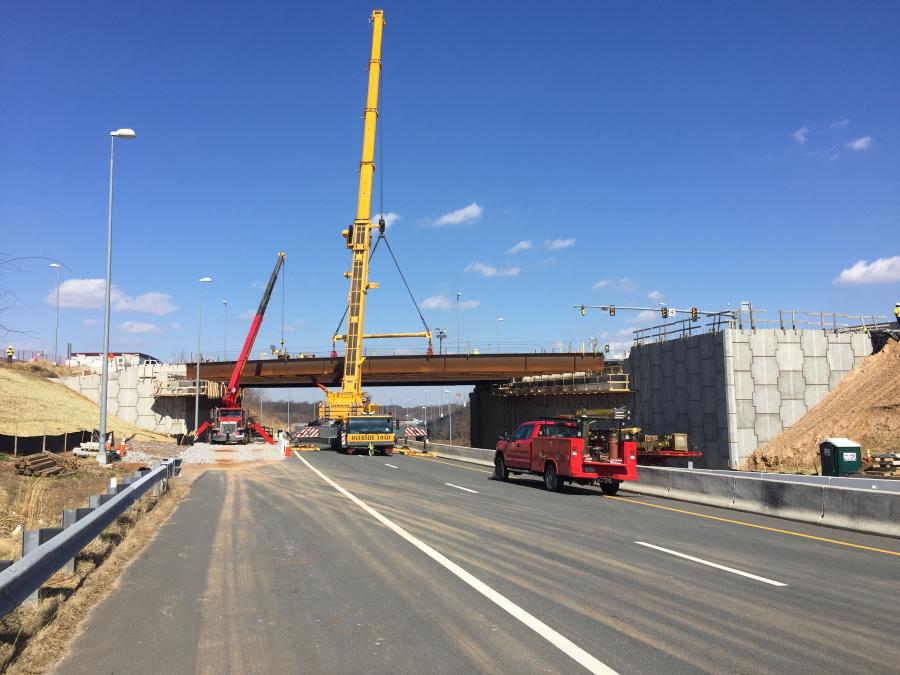 “The two western bridges, already in place, are being widened,” added Kamilakis. “They are both steel plate girder bridges with MSE abutments. We matched the existing design to widen in-kind for the two western bridges which also eased construction impacts to Beltway traffic. The longer bridge spanning over northbound I-495 also lends itself to steel girder construction and it was developed as a steel girder bridge to match the other two bridges.”

The traffic impacts include nighttime lane closures on I-495 (Capital Beltway) and the I-495 express lanes as steel beams are installed. There will be additional lane closures as needed on Dolly Madison Boulevard, Scotts Crossing Road and Jones Branch Drive. The lane closures cover non-rush hour periods during the day and longer periods at overnight, often between 10 p.m. and 5 a.m.

A key aspect of the traffic management plan is ensuring that access to all businesses is being maintained throughout the construction.

“Safety of all of the users of the new bridges is paramount,” Kamilakis said. “By adhering to the Tysons Urban Design Standards, the project is not only bicyclist and pedestrian friendly, but it also accommodates future transit. By having overnight and off-peak lane closures, we reduce the impact on drivers and businesses in the immediate area. Work zone safety is a year-round focus for VDOT. Drivers who are distracted or intoxicated pose a serious safety risk for crews working on the project. VDOT asks that all drivers stay focused while driving and pay special attention to work zone signs.”

March was a busy time for the crews as steel beam placement for the bridge over I-495 began; abutment and retaining wall work continued; and installation of ITS systems, traffic signal work, light pole foundation work along Scotts Crossing Road and sound wall work along I-495 continued.

Archer Western has set the beams on two of the three bridges.

“An interesting challenge with the project comes with its location, adjacent to the construction of Capital One's new corporate headquarters,” said Kamilakis. “Communication and coordination amongst stakeholders have ensured that it has been a seamless working relationship. There is essentially one big work site, although it is three bridges. The general contractor suggested combining portions of phase one with portions of phase two, which was implemented — thus optimizing the contractor's productivity.

“Communications with the general contractor continue to be open, productive and ongoing,” she added. “The project is considered to be one big team. There is only a minimal amount of roadwork with this project. There are several mechanically stabilized earth [MSE] walls in various locations of the project.” 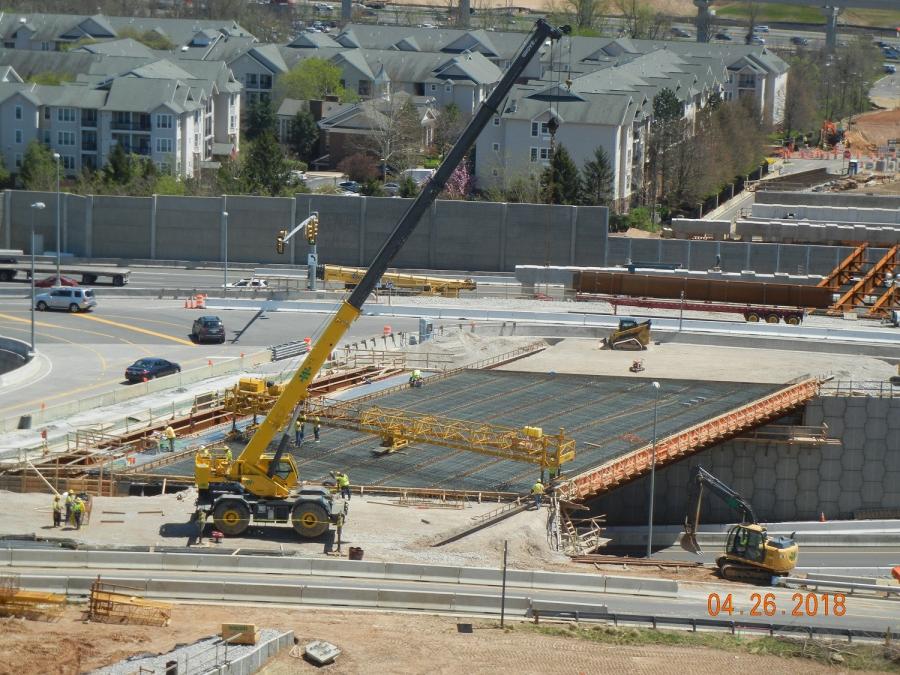 Putting up three bridges is no easy task.

“In anticipation of future lengthening of the bridge, the west abutment of the existing bridge was designed and detailed in a manner that will permit a future conversion to a bridge wall pier with minimal modification,” she added. “A link slab was introduced over the newly converted wall pier to eliminate the need for an expansion joint between the existing span and the new span.”

Of the many subcontractors working on the project, the major ones include: A-Annandale Inc. for pavement markings, DRM Associates Inc. for metal deck forms and shear studs, Gull Corporation for flatwork, Hardscapes Construction Inc. for MSE walls, High Steel Structures LLC for structural steel, Interlock Steelworkers for reinforcing steel, Virginia Paving Company for asphalt pavement, Virginia Sign and Lighting Company for ITS/lighting/signals and William B. Hopke Co. for waterline work.

There are approximately 40 construction workers on site on the average day.