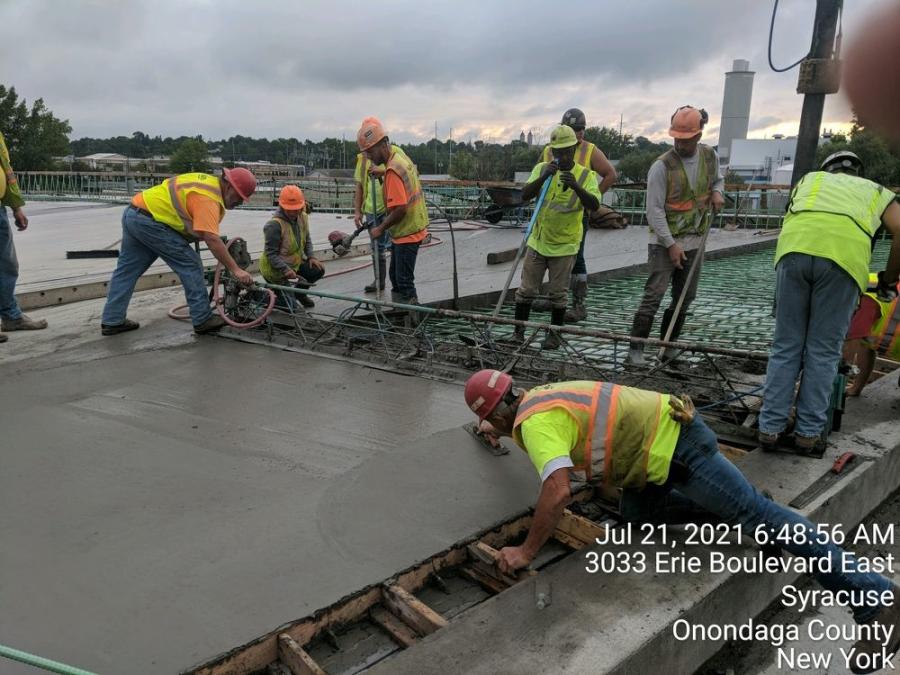 The pouring of the new southbound and northbound decks was completed on Nov. 11, 2021.

Vector Construction is replacing the concrete bridge decks and bearings to improve travel conditions and enhance safety along one of county's most important and heavily traveled corridors.

Built in 1971, the twin-bridges (504 ft. long) carry traffic over seven lanes of I-690 and the CSX Railroad in the city of Syracuse and the village of East Syracuse. Financed by state and federal funds, the DOT investment complements "CNY Rising" — the Region's Comprehensive Strategy to Revitalize Communities and Grow the Economy. It's also associated with the Statewide Transportation Improvement Program (STIP), for which federal funding is helping the state upgrade highway infrastructure, 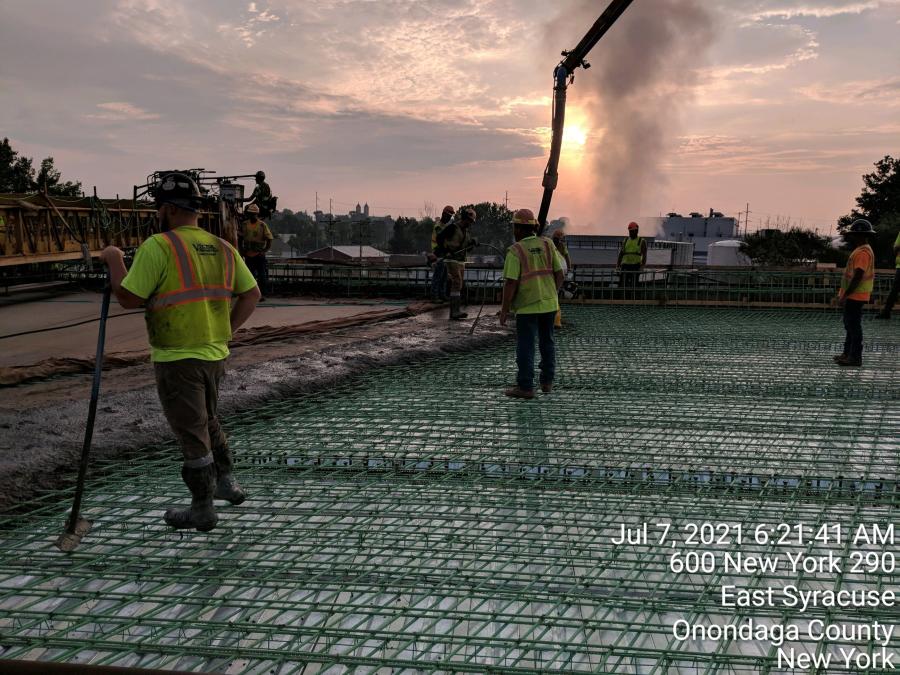 Vector Construction secured the contract in November 2020 and should complete the project by Oct. 1, 2022.

Thompson Road is a key link for drivers to access the New York State Thruway, Carrier Circle, I-690 and the retail and commerce centers along Erie Boulevard, as well as providing access to Lemoyne College and the recently completed Empire State Trail down the center of Erie Boulevard.

"A safe and reliable transportation network is vital to the well-being of our communities and the vitality of our economy," said NYSDOT Commissioner Marie Therese Dominguez. "Investments in infrastructure like the Thompson Road bridges and the lighting on Interstate 690 will benefit motorists for years to come and help ensure the continued flow of commerce that will keep central New York rising to new and more prosperous heights."

In addition to the redecking, the project also is cleaning and painting the bridge's existing steel structures, and conducting repairs for the concrete underneath the bridge and installing new light fixtures on the bridges themselves. Also, at the request of the city of Syracuse, the project includes the installation of new highway lighting along I-690 from Midler Avenue to Thompson Road. Once the lights are installed, the city will maintain them and cover their electricity costs.

"These are highly-travelled bridges for residents of the city and people all over the region," said Syracuse Mayor Ben Walsh. "The work will mean smoother and safer trips for drivers. I'm pleased to see this major project getting under way."

The bridges carry approximately 24,000 cars and trucks daily. The upgrade was designed by NYSDOT.

"The new decks are all constructed with new rebar and concrete to replace the deteriorated deck," said Curtis Jetter, NYSDOT Region 3 public information officer. "They do not have standard bridge joints over the piers, but have link slabs, which eliminate the need for joints and therefore will be more maintenance friendly."

During construction, one lane of traffic in each direction will be closed.

"A portion of the project work [bridge deck removal] will take place at night to limit traffic impacts," said Jetter.

Vector's experience with bridges throughout New York is considerable, with the company having been established in 1963 by Richard F. Anderson.

"The biggest challenge was just the scheduling, because everything has to be done one after the other," said Anderson. "We removed the deck, lifted the bridge, removed and replaced pedestals, installed new bridge bearings, formed and poured the deck, cured the concrete, installed the bridge barrier and fencing and guiderail transitions, and once this was complete in the northbound direction, traffic was moved onto the new newly construction portion and the same sequence of work was performed in the southbound direction. We probably had 1.5 weeks of the end of June to the first week of July where we weren't able to pour a deck. It was just raining every day. 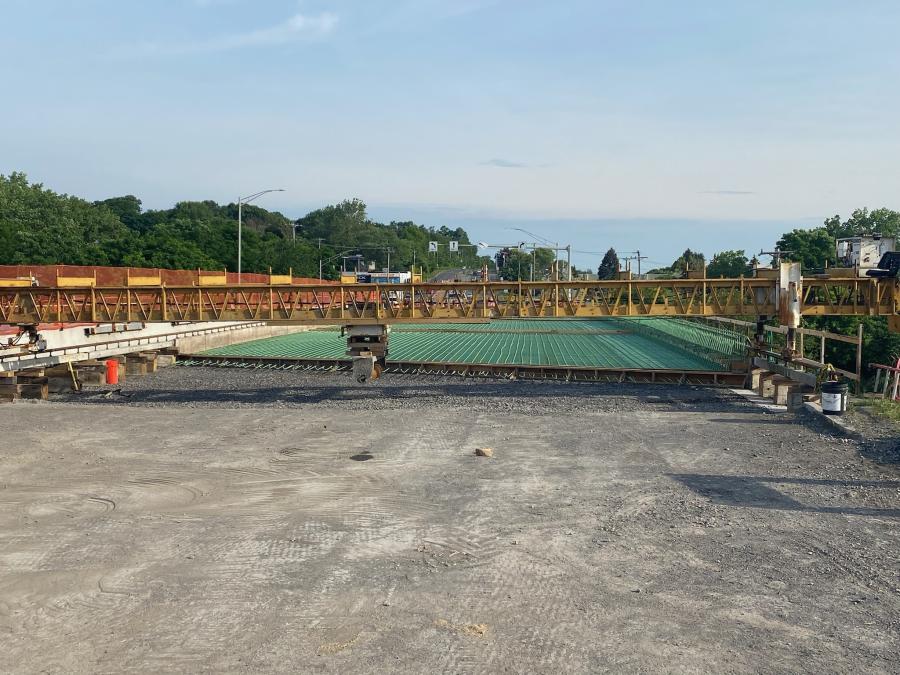 "We had sufficient space," he added. "When we closed off an area, we were able to use the ramps. There were no utility issues. We have a very good relationship with NYSDOT's engineer in charge of the project and we work though issues. Our relationship with CSX and their consultant is also very good."

Coordination with NYSDOT and CSX is essential and this included collaborating on safety planning for the crews and vehicle and rail traffic. These efforts are being handled by Project Superintendent Scott Warner, the jobsite safety competent person, and Bill Anderson, Vector's vice president and company safety director.

The redecking started with the removal of the old decks on the northbound Thompson Road lanes.

"The deck removal over I-690 was done in two stages — the I-690 section was 340 feet long and 93 feet wide and the CSX section, 165 feet long and 93 feet wide," said Anderson. ‘On a good day, our crews could remove 1,000 square-feet of deck. The work is progressing as planned. The decks were cut transversely using diamond saws and cut with hydraulic hammers and rams longitudinally along the beams. After this was done, the slabs could be picked out. Night work took place for the portion of the deck removal over the I-690 eastbound and westbound lanes over two weeks. The bridge rehabilitation portion of the project should be completed by the end of the year and the painting is scheduled to take place in 2022."

The pouring of the new southbound and northbound decks was completed on Nov. 11, 2021. "Everything was removed and replaced," said Anderson.

The pour operations will see the use of a GOMACO C-450 finishing machine and two Putzmeister concrete pumps. The concrete is supplied by Hanson Aggregates.

"The installation of the lightings will be complete by the end of the year," said Anderson. "The main challenge for the lighting work is providing adequate traffic control for worker access. I-690 can be very busy at times. New conduit and wiring are being installed throughout the bridge, with the system being connected to an existing power source."

"We've worked on numerous projects together," said Anderson. ‘They both have been with us for over 20-plus years. They are experienced and trustworthy. One of the benefits that we have is the experience of our employees. We've been pretty lucky. We've worked with our crews and subcontractors for years. We know each other and get things done. We have a good relationship with our subcontractors."

Peak days have had 12 to 16 Vector and subcontractor workers on site, with main subcontractors being Schupps Line Construction for lighting, Amstar Painting for painting and Interstate Reinforcing for reinforcing bar. 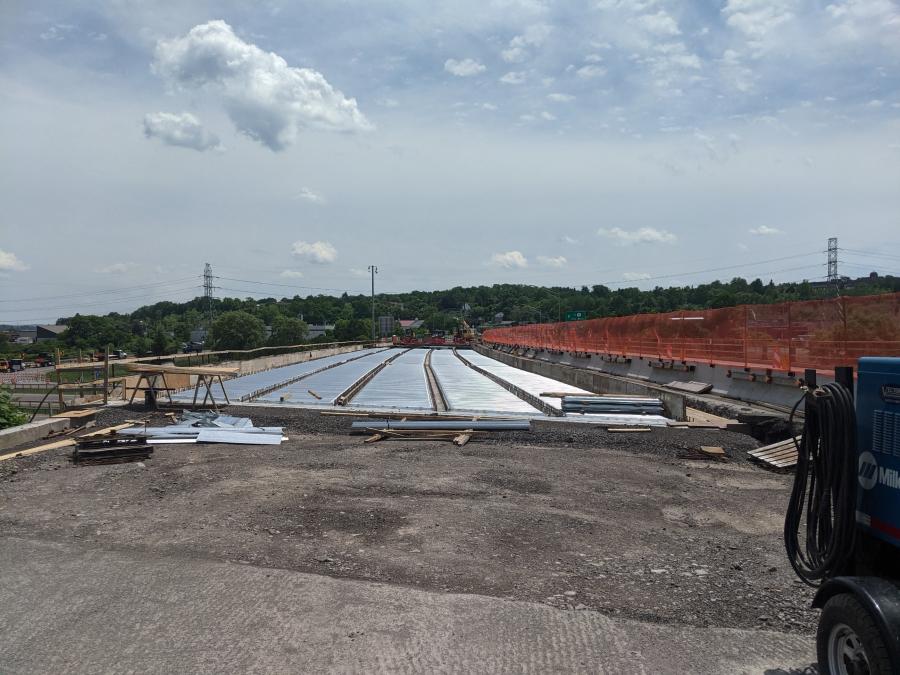 The deck demolition should generate 4,000 tons of concrete, 200 tons of steel, and 1,400 tons of asphalt. New construction materials will be similar to those removed.

"The debris from the demolition is being taken to quarries," said Anderson.

Vector's equipment is well maintained. "We try to rent our compressors," said Anderson. "We've bought them in the past, but we moved to renting them because if one goes down, we usually get them replaced by our equipment vendor. They'll have it out there the next day. We have a couple of mechanics at our office. We'll send them out on site if need be, but most of the time, we like to bring the piece of equipment back to our office."

Vector purchases and rents equipment from Anderson Equipment, Clark Equipment and Amstar Supply, all within the Syracuse area.

"We've done business with them for quite some time," said Anderson. "We trust what each other is saying. It's just a good relationship." CEG