Vegas Bets on Raiders With $2B Stadium

The almost $2 billion Las Vegas Stadium will feature a retractable natural turf field and a glass-dome roof when it opens in time for the 2020 football season.

In southern Nevada, construction crews are building what will be the Oakland Raiders first-ever home stadium. The almost $2 billion Las Vegas Stadium will feature a retractable natural turf field and a glass-dome roof when it opens in time for the 2020 football season. 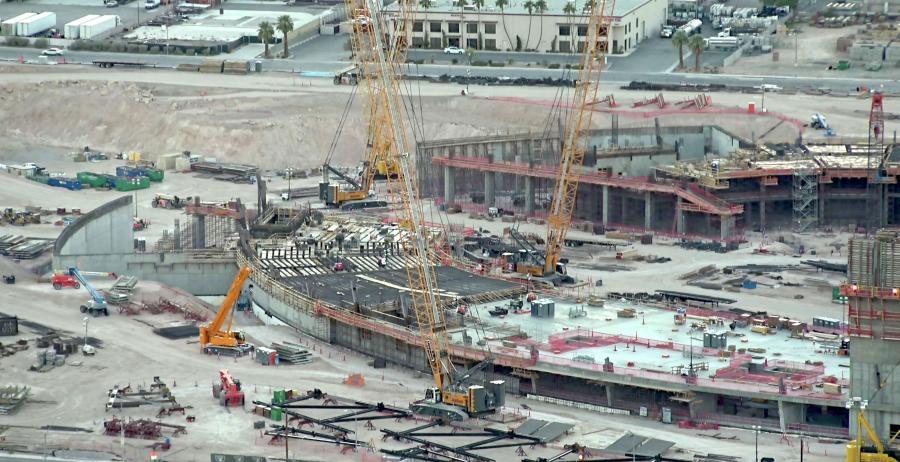 "The stadium is rising out of the ground very quickly," said Cara Clarke, associate vice president of communications of the Las Vegas Metro Chamber of Commerce. "Because it's adjacent to the Las Vegas Strip, it's a very prominent project. In fact, people drive by the stadium and get out and take selfies, so it's already a destination."

The stadium is located on roughly 62 acres west of Mandalay Bay at Russell Road and Hacienda Avenue and between Polaris Avenue and the former Dean Martin Drive, just west of Interstate 15. Construction began in September 2017, and is well under way. Fans are counting the days until completion.

"There is tremendous excitement in our community about Las Vegas becoming a professional sports town," said Clarke. "It's bringing about a new sense of pride and hometown spirit. With a major project, such as the stadium, it's also creating invaluable jobs."

The first of 44 steel truss columns, weighing 95,000 lbs., were lifted into place for the stadium's steel exterior in late September. Located near the airport and adjacent to the Las Vegas strip, the new facility is expected to be a significant driver of visitation.

"Because our city is tourism based, it is important to invest in infrastructure that will accommodate major events that will continue to attract visitors," said Clarke.

In addition to offering a horseshoe-shaped seating arrangement, the stadium will feature a tower that will house a flaming cauldron in honor of the late Al Davis, the Raiders' longtime principal owner and general manager. The project calls for on-site parking, tailgating amenities, open clubs, lounges and private suites, as well as a mixed-use commercial development. 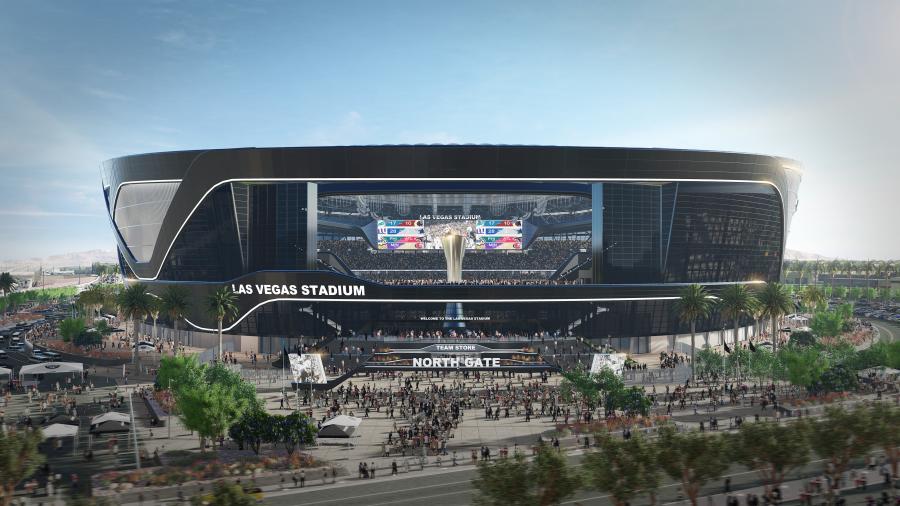 The new stadium will be tremendously beneficial to the area, according to Clarke.

"Our core industry is tourism, and it's vitally important that we continue to invest in tourism infrastructure that allows us to host major events. One of the key assets Las Vegas was missing was a major league stadium that could host not only NFL football, but also events such as bowl games, major college football events, world-class soccer, large scale concerts and other major events.

"Without this type of stadium, Las Vegas was at risk of losing these types of major events to other regions. With the new stadium, people from across the country, and the world, will come to Vegas to watch their favorite teams play, experience a professional sporting event that they may not have in their region, or see a major concert."

Gov. Sandoval appointed the Southern Nevada Tourism Infrastructure Committee in July 2015 to examine types of tourism infrastructure that the community needed to invent, in order to stay competitive and continue to attract millions of visitors to the city. The primary focus of the committee was examining the need to expand and renovate the convention center.

During the committee's work, the potential of the Oakland Raiders relocating to Las Vegas was raised, and this strong possibility led to the committee recommending to the governor and the legislature in late summer of 2016 that the room tax be increased to include an expanded and renovated convention center and an NFL-quality stadium. In March of 2017, the NFL owners voted to approve the move.

"There are a lot of football fans in Las Vegas, many of them are Raiders fans already," said Clarke. "We also know that people from across the country are going to want to follow their team to Vegas to watch them play the Raiders. In addition, our UNLV Rebels will be playing in the same stadium, so there's excitement among that fan base."

Clarke noted that it's important the stadium be seen as an entertainment venue, not just a place to watch football. 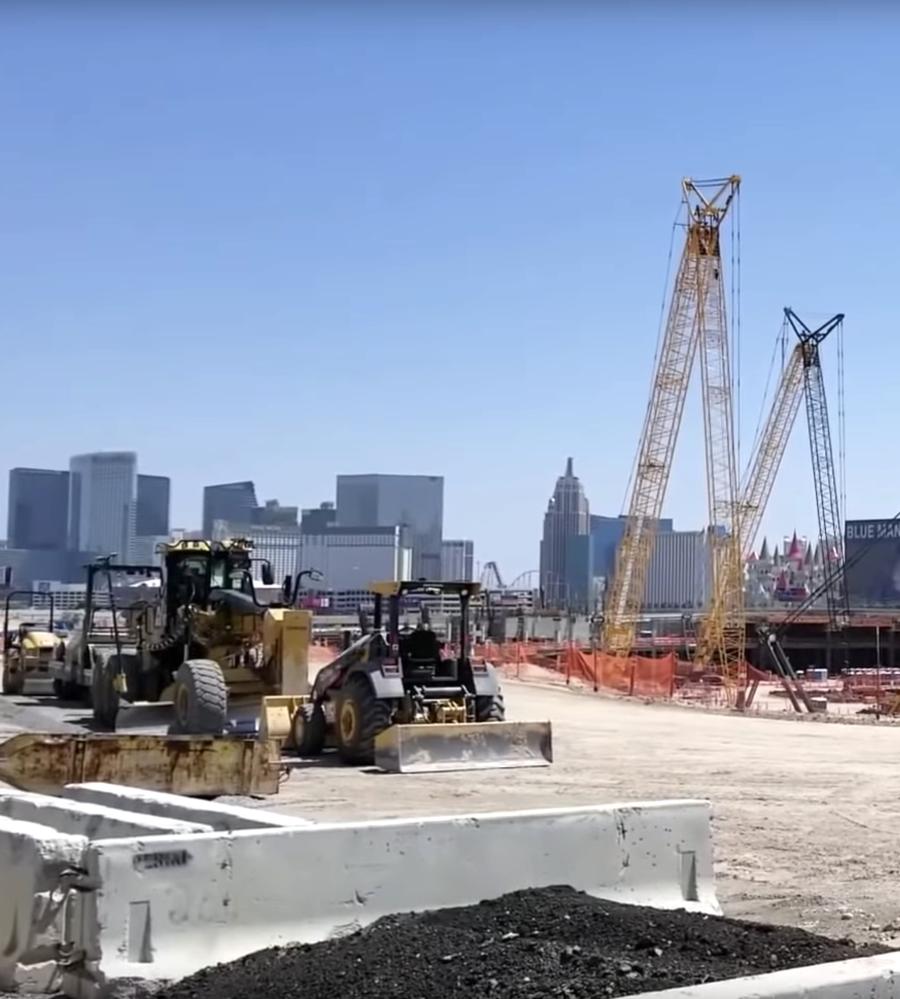 "The design of the stadium has made the Las Vegas Strip view a focal point of the stadium experience. It also will have a lounge area where people can connect and watch the game. And Caesars Entertainment just signed an agreement to brand the entrance into the stadium."

Caesars Entertainment has just announced a 15-year partnership that will make it the first founding partner of the new stadium.

"The Raiders are proud to welcome Caesars Entertainment as a founding partner of Las Vegas Stadium," Marc Badain, president of the Raiders stated in a release. "We are honored to align with a company that shares the Raiders' values of improving the local community and delivering exceptional customer service in creating this transformative project."

"Sports have long been a core part of the Caesars experience," said Chris Holdren, chief marketing officer for Caesars Entertainment. "With this deep partnership, Caesars will become an essential part of the game time ritual for Raiders fans everywhere."

The historic partnership also marks the first Raiders deal with a gaming and hospitality company. As a founding partner, Caesars Entertainment will host a branded stadium entrance and drop off zone, as well as digital signage, media, radio and print assets. 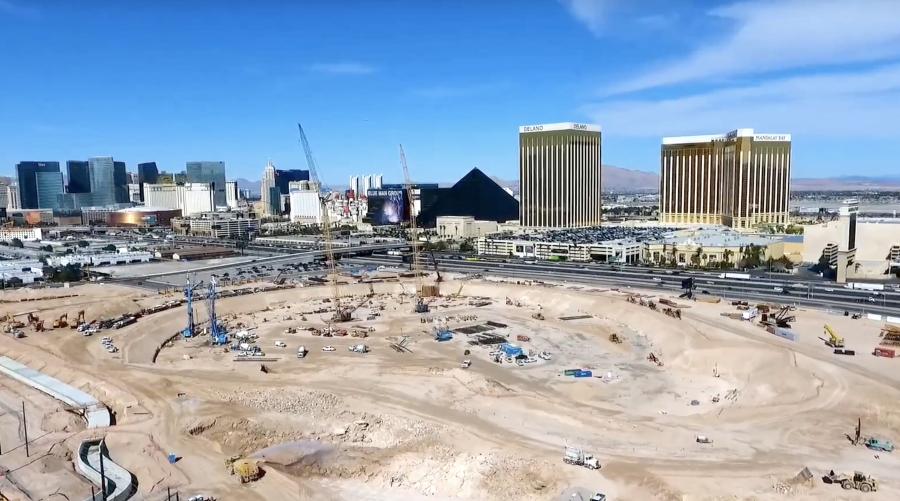 "Right now, it's a lot of work, and sometimes it is hard to see past that. That said, it isn't that long ago that this community was among the nation's highest in terms of its unemployment rate. Obviously, seeing the project take shape is exciting, because of what the completed stadium portends; but, for me personally, seeing the project take shape is a manifestation of people getting back to work, which was an important element of the partnership."

According to Aguero, the new addition to Las Vegas will be a source of pride for the community.

"There's a relatively small set of ‘NFL Cities'. We have noticed an increased amount of attention and notoriety in this regard, since the announcement of the project and the Raiders' relocation."

Celebrities, former players, NFL officials and local politicians were among those taking part in the groundbreaking ceremony that marked the formal start of construction of the 65,000-seat structure. An estimated crowd of more than 600 attended the event. Team owner Mark Davis and NFL Commissioner Roger Goodell shoveled the first scoops of dirt.

"It will be seen around the world as a reflection of the spirit of Las Vegas, a resilient city on the rise," Goodell told reporters. "This is a very significant day in the franchise's storied history, and a tangible symbol of the team's future in Las Vegas."