The I-89 bridges project in Waterbury was designed to repair aging parts of the I-89 mainline substructure. 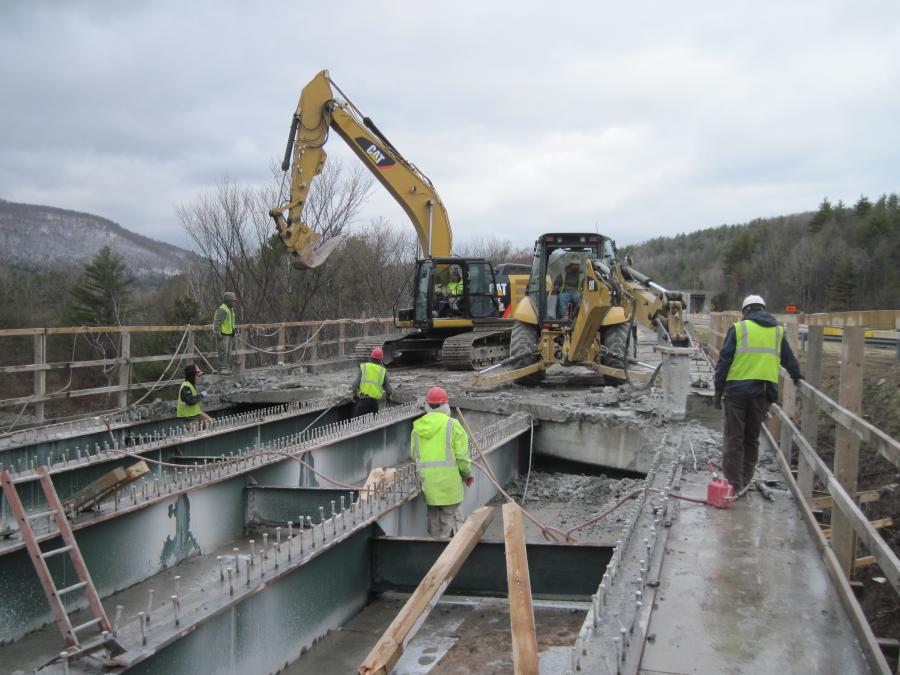 Work on the final phase of a multi-phase bridge project in Vermont is set to get under way in late March. The I-89 bridges project in Waterbury was designed to repair aging parts of the I-89 mainline substructure, to extend the life of the northbound and southbound bridges and replace the Exit 10 northbound off-ramp bridge.

“It's been in the works for a while,” said Vermont Department of Transportation project engineer Tom Mancini. “The bridges were in pretty bad shape and needed to be rehabbed. Two of the bridges this year involved deck replacement.”

The two mainline bridges had deteriorated to the point that concrete was starting to fall from the structure. The existing bridge ramp is a six-span structure with five piers and expansion joints at each pier. Severe deterioration of the concrete piers on the bridge ramp combined with the need for painting and re-decking triggered the replacement.

“The ramp bridge is going to be completely new,” Mancini said. “It will be wider with two lanes of traffic. We've already started doing some of the work under the bridge. About the middle of April, we'll close the bridge and put traffic on a temporary bridge already built.”

The work began in the fall of 2014 with underground utilities installed in underground conduits along Stowe Street to facilitate the demolition of the bridges. In 2015, decks on the northbound and southbound bridges were replaced by crews with Beck and Bellucci Contractors, based out of Franklin, N.H.

The work went as anticipated, Mancini said. “The goal was to get those two bridges done in the first year, which they did and they earned their bonuses. The idea is to complete the third bridge next year and hopefully they will get that bonus as well.”

Equipment on the site includes a Caterpillar 336 excavator and a Caterpillar 329 excavator. “We're using those for removing the deck and doing dirt work. On 46a, the bridge ramp, the footings are down. They went 28 ft. (8.53 m) deep, so we needed that large excavator, but we still couldn't reach the bottom, so we had to have a mini-excavator to reach the bottom.”

The biggest challenge, Mancini said, was traffic. “This is the Stowe resort ski town,” he said. Everyone gets off at this exit to go there.”

But while construction occurred after ski season, there was plenty going on in the summer months, he said.

“There is a lot of mountain biking, special events on weekends, a large Lacrosse tournament. During those big events, Thursday through Friday, it was bumper to bumper on Route 100.”

To alleviate that traffic congestion during construction, crews divided the interstate, a first for Vermont, Mancini said.

“Before you even got to the work area, the interstate was split into two separate lanes, ramp traffic was on the right, through traffic on the left. That way if there was a backup of traffic getting off, through-traffic could still flow. This was never done in Vermont, and it was quite a learning curve for drivers to get used to that. The people who did read the signs, they got through fine. The people not paying attention were having issue.”

The new bridge ramp will be built with two piers and three spans with continuous steel girders and expansion joints at the ends only,” according to the VDOT press release on the project. “Reducing the number of expansion joints on the ramp bridge will reduce the potential for leaking at expansion joints, which causes deterioration of the bridge.”

The new bridge is scheduled for completion in October 2016, with other repair work and the project to be fully completed by October 2017, Mancini said.