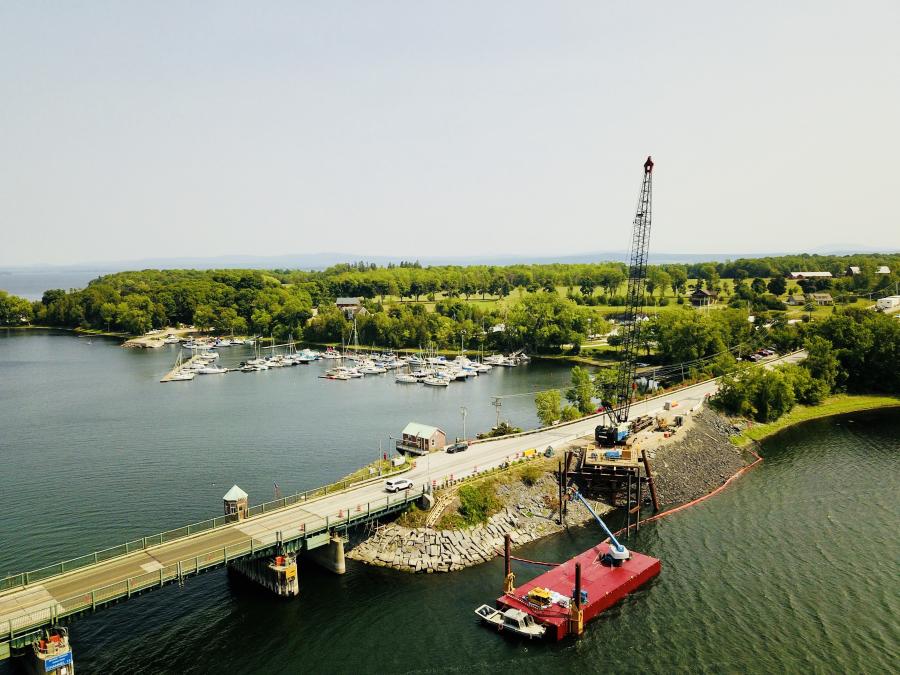 In addition to the temporary drawbridge the $60 million project includes demolishing the existing drawbridge and replacing it with a new drawbridge. (EIV Technical Services photo)

Contractors are working to finish a temporary drawbridge linking two islands on Lake Champlain with a race through the winter to have the new bridge fully functioning in time for the first seasonal opening of the bridge May 15.

Work began on the North Hero-Grand Isle Bridge in Vermont earlier this summer. In addition to the temporary drawbridge the $60 million project includes demolishing the existing drawbridge and replacing it with a new drawbridge.

“They are going to be working on the bridge all through the winter,” said Todd Sumner, senior project manager of the Vermont Agency of Transportation. “They got the temporary out to the abutments and are going to start on the first pier 60 feet off shoreline. The goal is to get all those in, and in the very center of the navigation channel will be one span that opens and closes. After October 15 — when the seasonal openings for boat traffic ended — they will put that span in and then work on electrical and mechanical over the winter so that when May 15 comes around it will be opening by that point.” 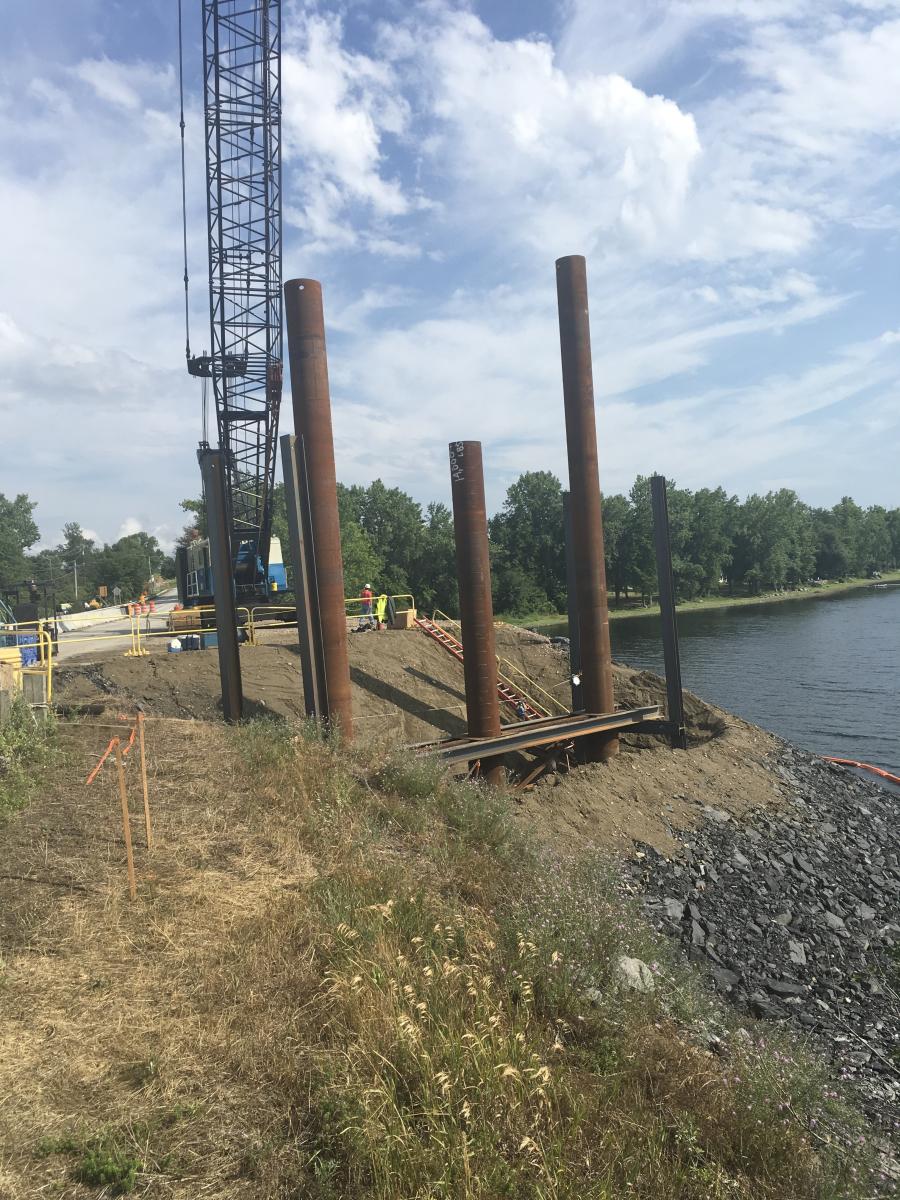 The existing bridge was built in 1953 and is the main road through the islands, with 3,000 cars using it daily during the off-season and double that number in the summer and fall months. It also provides the only unrestricted access for boats, and is the only route big sailboats can get through.

The bridge itself is in fine physical condition, Sumner said.

“It's the mechanical and electrical parts of getting it open that is in very dire need,” he said. “The actual capacity to carry traffic is fine. The motors, the electrical, all the mechanics are in really bad shape. The state has been sinking money into it for years just to keep it running. If this project got delayed, there is no guarantee we would be able to open this bridge in the future. There is a risk of not being able to open this bridge.”

Were that to happen, the state could face a $25,000 fine every time it failed to open.

That's why the state can't afford it to happen. That expectation would apply for any bridge.

“The original permit says we are supposed to open on the half hour,” Sumner said. “We've got a one-year deviation to open it once every hour on the hour. That gives us more time for contractors to work between openings, plus if we keep opening it up every half hour all day long, we're worried it is taxing an already overworked old electrical system. We are limiting the chance of operation failure because it is stuck closed or open. It's like owning a house and you bring in new appliances and want to upgrade the wiring, and you realize if you touch that, you are rewiring your whole house.”

There also are excavators and trucks on site to complete the infill portion of the project. 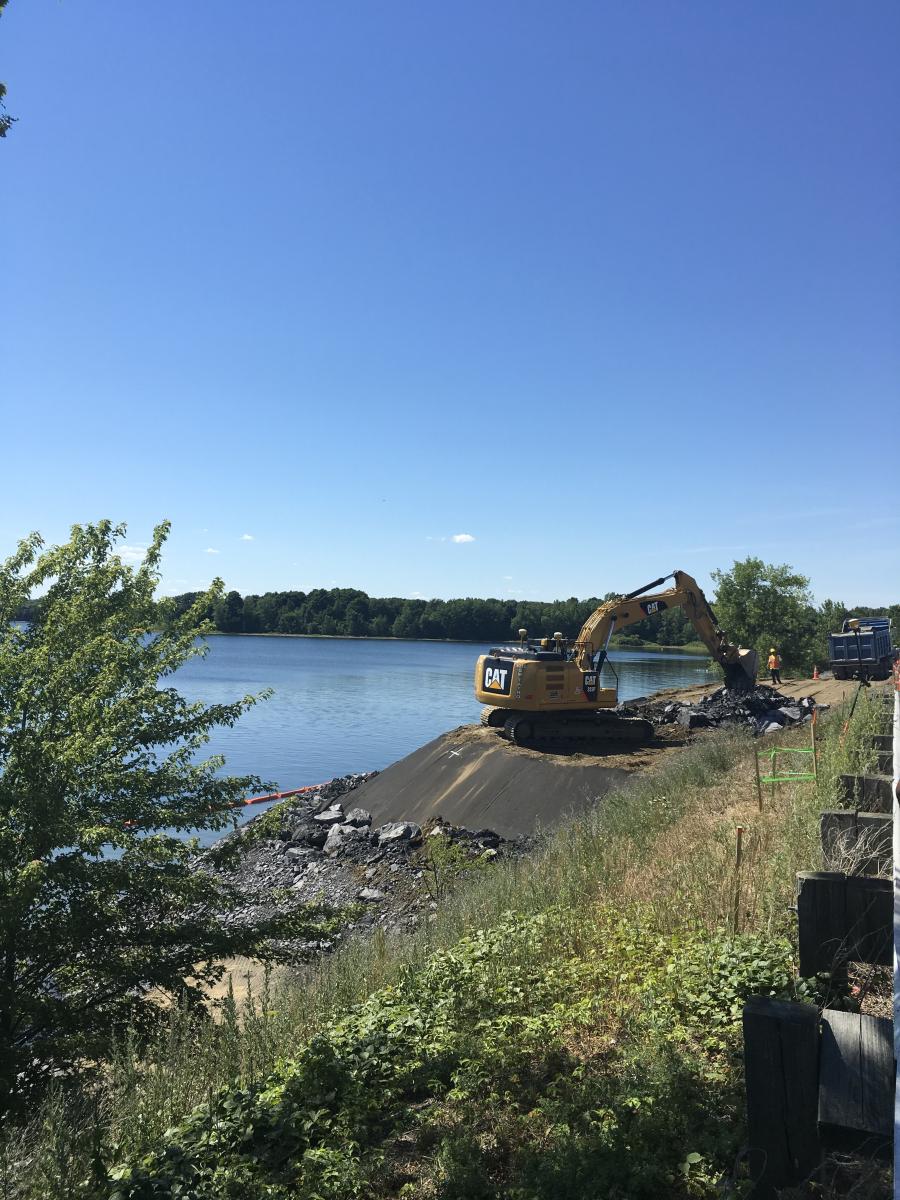 The new replacement drawbridge will be located in the same spot as the existing bridge. Otherwise, contractors would have to build a new causeway which would have a permanent impact on Lake Champlain. Building in the same location also saves on the permitting process, which saves money. Likewise, because the temporary bridge has a shorter lifespan, the permitting process also is less involved. The temporary bridge is being constructed on piles, some driven into the rock ledge under the mucky lake bottom. Steel will be used for the bridge foundation with a very thick wood deck placed over the steel.

“This isn't a bridge we're trying to get 100 years out of,” Sumner said. “It's a temporary bridge — the materials won't last that long or handle the ice loading for 100 years. It's designed for a shorter life span and the materials aren't as durable. It only needs to last through construction.”

The completion date is set for the 2022, but the new drawbridge is expected to be substantially complete in the winter of 2021. Contractors will come back in spring of 2022 to make sure new vegetation is thriving, get the field office off the site and demobilize.