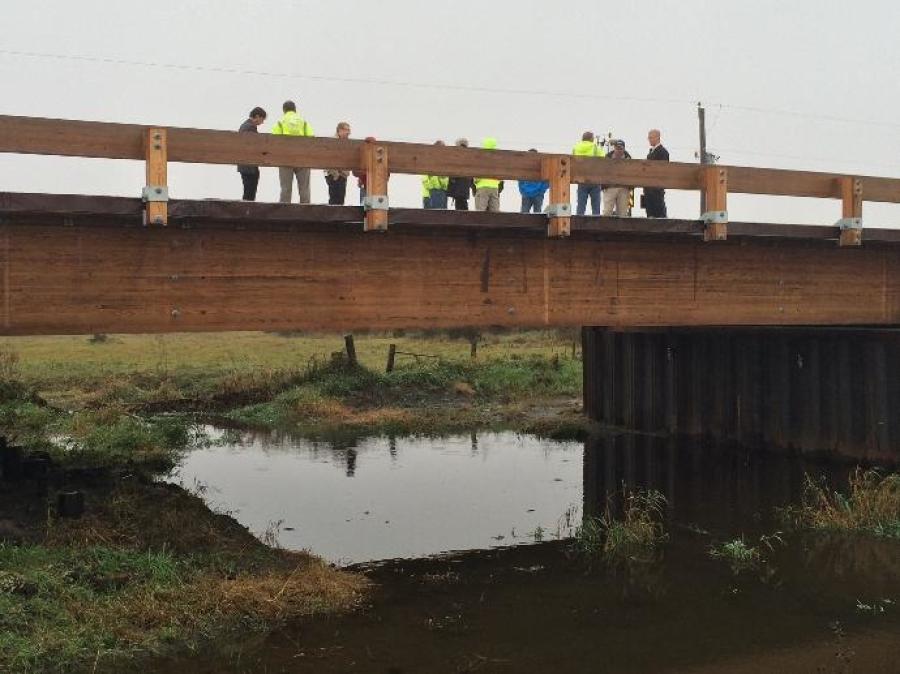 Image courtesy of KCRG. Buchanan County engineer Brian Keierleber says one difference most people would notice right away is the material used—wooden beams instead of the usual concrete.

Few people outside of Buchanan County, Iowa may have ever heard of the Catt Bridge located on 215th Street northeast of Independence.

But county engineers around the state may be watching in the future to see how well it works.

The 40-foot-wide bridge spans Nash Creek and building it was a good deal for the county. Outside groups contributed at least one third of the $250,000 dollar cost because it's not just your average county bridge, it's also an experiment in using new construction techniques and materials.

Buchanan County engineer Brian Keierleber says one difference most people would notice right away is the material used—wooden beams instead of the usual concrete.

“If you look at the beams there on the bridge, those are two by 12 sections of wood that are pressure treated and glued together so pressure treating them keeps them from decaying,” Keierleber said.

But another big difference isn't something most non-engineers would notice. The bridge abutments, the structures holding up either end, aren't made with the typical concrete or wood timbers for support either.

County workers used a technique of mixing tough fabric with gravel in layers. It's called Geo-synthetically reinforced soil or GRS. Doing both glued, laminated beams together with GRS techniques is something new and could be unique to this small Buchanan County bridge.

Keierleber says without the donated materials, it might have cost the county as much to build this new kind of bridge as the traditional kind.

But Travis Hosteng a bridge research engineer at Iowa State University's Bridge Engineering Center, says it could still save counties money on the smaller bridges by eliminating the need to hire specialized bridge contractors.

“You don't need large equipment to set this material or build these bridges as the county engineer showed, you could do it with a county work force, and smaller numbers of less skilled labor,” he said.

The bridge office at Iowa State will have both cameras trained on the bridge and sensors built in to monitor the stresses of daily traffic. Engineers who are interested can call up images or data in real time to see how this unusual bridge is doing.

If it holds up, it might convince other counties to give it a try.