Slow motion video captures the scene as in a matter of seconds the bridge that connected two counties for six decades crumbled. 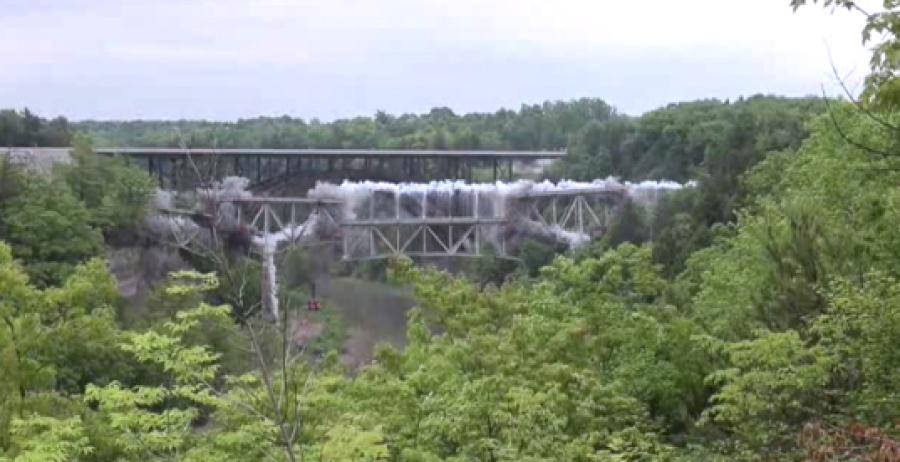 Two and a half million pounds of steel rained down into Cattaraugus Creek on Thursday morning when 35 pounds of explosives took down the span the old Route 219 bridge.

The Buffalo News is reporting that 2.5 million pounds of steel rained down into Cattaraugus Creek on Thursday morning when 35 pounds of explosives took down the span the old Route 219 bridge.

In a matter of seconds and accompanied by a monstrous boom of sound, the bridge that connected Erie and Cattaraugus counties for six decades crumbled.

Gov. Andrew M. Cuomo, who delivered remarks before the implosion, talked about the circumstances surrounding the bridge-replacement project.

“Ten years of talking about 219 and what should be done and what needs to be done, but nothing happened,” Cuomo said. “Why? Because it took focus; it took resources; it took the state to help. And today is a different day. And today is a day of progress.”

Cuomo spoke at a viewing site set up for politicians, project employees and the media on the Ashford side of the creek.

Thursday's demolition was part of a $16.9 million bridge project that calls for a new multigirder bridge to be erected in the same spot, just west of the two bridges over the creek that are part of the Route 219 Expressway. State Department of Transportation officials said they expect the new span to be open to traffic next June.

The old bridge, which opened to traffic in 1956, required repairs in recent years and was shut down for several months in 2012.

There wasn't always a plan to replace the span. A future without a replacement drew concerns from residents and businesses in the area who saw the bridge as an important piece of a well-traveled route that some thought would be obsolete with the 219 Expressway expansion that opened in 2010.

Now that the 650-foot-long bridge is down, crews are immediately implementing a cleanup plan that involves using a specialized crane that can also cut the steel as it's picked out of the creek, said DOT spokeswoman Susan S. Surdej.

The crane being used is one of only six of its kind in the country, Surdej said.

Crews expect to harvest all the fallen steel by Saturday, she added. They removed the 9- to 11-inch concrete deck of the bridge in 6-foot-square chunks prior to the detonation, leaving only the steel structure of the truss bridge to fall at about 10:15 a.m. Thursday.

Traffic on Route 219 was stopped for a brief period in both directions to accommodate the demolition.

The company hired to handle the detonation was Controlled Demolition, based in Phoenix, Md. The company has done projects across the country, including demolishing what remained of the Alfred P. Murrah Federal Building in Oklahoma City after the terror bombing by Timothy J. McVeigh in 1995, as well as the Seattle's Kingdome stadium in 2000. The firm's next demolition project is the former Riviera Hotel & Casino in Las Vegas.

The new bridge, which has been designed by the firm Erdman Anthony and will be built by Cold Spring Construction, will have an expected life span of 75 years and will be owned by both Erie and Cattaraugus counties.

The state has promised to cover expenses for bridge washing over its first 10 years. The state also will cover any expenses that exceed typical annual maintenance.