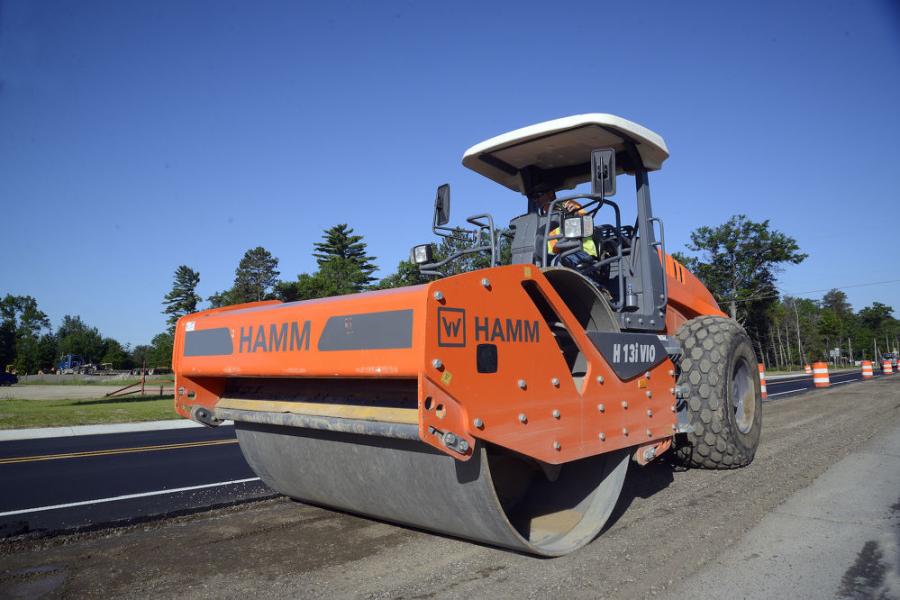 A soil compactor combining oscillation and conventional vibration in a single drum is adding value to in-place recycling projects by slashing the time it takes to get compaction to required density.

In northern Michigan, a Hamm H 13i VIO dirt roller — in oscillation mode — was paired with a Wirtgen WR 240i recycler/reclaimer to rebuild Michigan S.R. 72 near Grayling, in the lower peninsula about 80 mi. south of the great Mackinac Straits Bridge. 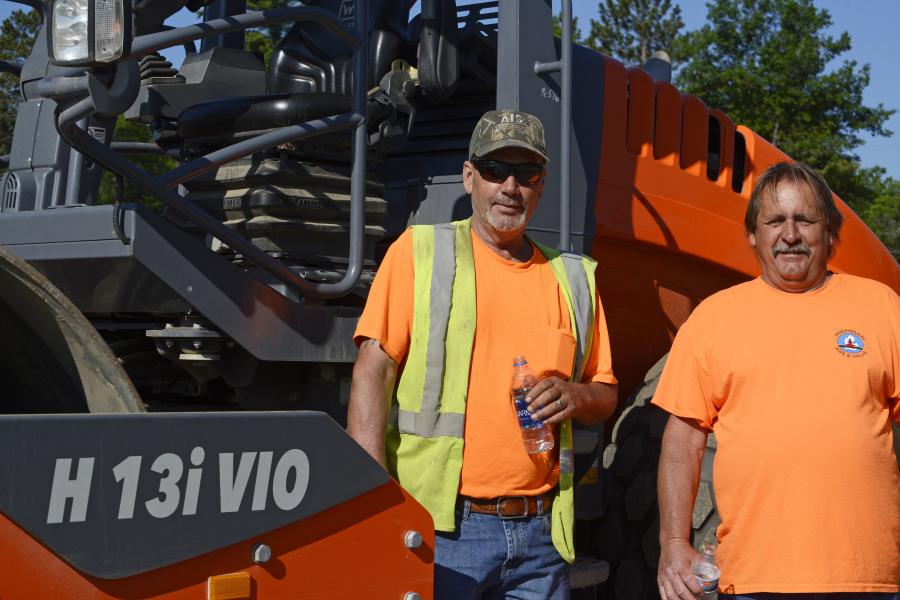 "We're doing a crush-and-shape of Michigan 72," said Jeff Mertz, project foreman of D.J. McQuestion & Sons Inc., LeRoy, Mich. "The condition was pretty rough, with alligator cracking and whatnot. We are pulverizing 8 to 10 inches with our Wirtgen WR 240i, depending on the thickness of the asphalt, down into the existing gravel base."

The pulverized material was being mixed with water to 6 percent as a compaction agent. As it exited the WR 240i, top size of the material was 3/4-in. to 1 in., down to fines. In the four-lane urban section, the 8-ft. recycler/reclaimer was processing two 12-ft. lanes in three passes.

"In excess of 100,000 sq. yds. would be pulverized and compacted," said Alan McQuestion, president of D.J. McQuestion.

From a single drum, the Hamm H 13i VIO soil compactor is capable of both oscillation and vibration modes. Oscillation compaction differs from standard vibration in that instead of a drum bouncing up and down on the material being compacted, oscillation creates a sideways movement in which compactive forces enter the material without the drum ever leaving the surface. 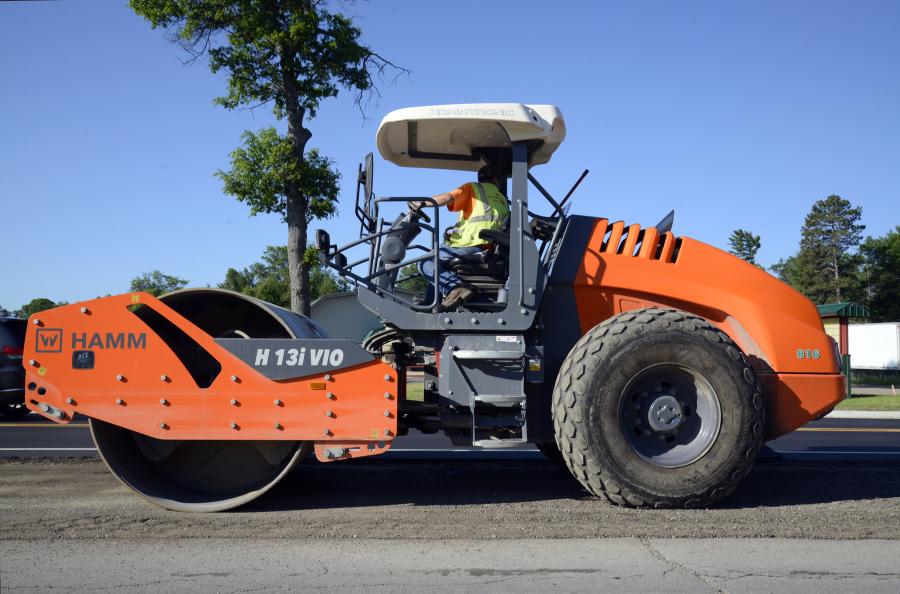 Within the oscillation drum, two unbalanced shafts rotate synchronously, with the unbalanced shafts offset 180 degrees. This causes the drum to carry out a rapidly alternating forward/backward rotary movement, and the compaction energy is directed into the substrate tangentially to the front and rear in the form of shear forces. In contrast to the vibrating drum, it acts dynamically on the substrate all the time. Because the drum is always in contact with the ground, there also is a constant static load due to the weight of the machine.

For earth work, Hamm's VIO drum permits oscillation in soil compactors as well as asphalt pavements. Its unbalanced system combines two compaction methods in a single drum, enabling compaction either with vibration or with oscillation.

That's ideal for earth work, as the VIO drum is able to compact in-depth with vibration and in the upper layer with oscillation. Switching between vibration and oscillation is carried out from the operator's platform and can even be done with the roller in motion.

Both vibration and oscillation systems were borne out by McQuestion on Michigan 72.

"The oscillation really pulls the reclaimed material together," Mertz said. "It's really good at getting density. At first, we hammer it hard with vibration for a couple of passes, then we put it in oscillation mode for a few passes and we get density every time."

McQuestion was routinely obtaining 98 percent density using the combination of vibration and oscillation compaction in the same drum. 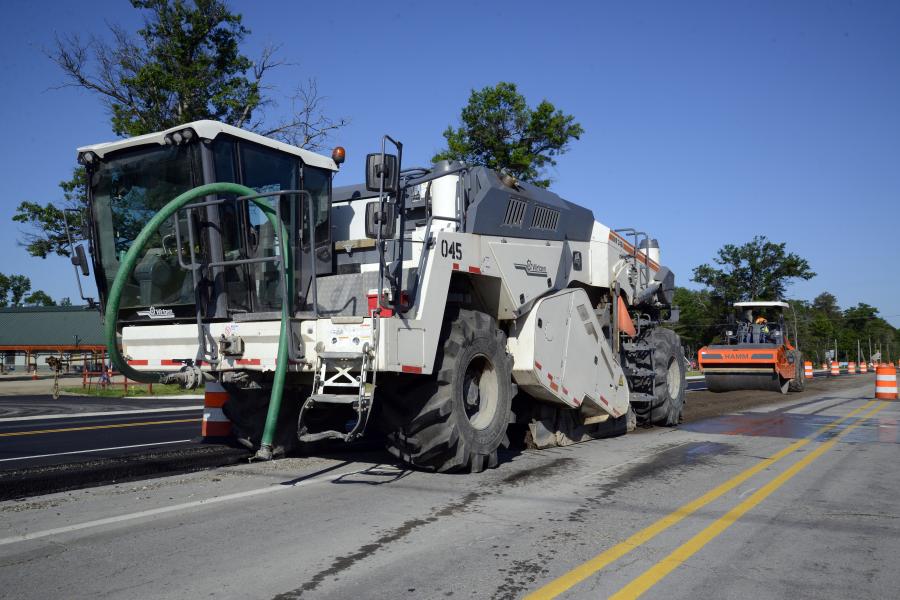 "Oscillation gets us compaction faster," Mertz said. "It seems to knead or pull everything together in a way we don't get with conventional compaction. We get density as much as 50 percent faster, which boosts our productivity. We don't have to fight density with the VIO roller."

A rubber-tired pneumatic compactor was used as a finish roller. After in-place reclamation of the existing driving surface, the urban section with curbs would get 7 in. of hot mix asphalt, and 4 in. of asphalt in the rural two-lane section with shoulders.

The new H 13i VIO roller on this project is one of three owned by D.J. McQuestion & Sons. In addition to road construction the firm also undertakes commercial site work.

"It brings in density at least 10 to 15 percent faster than a standard vibratory roller," said McQuestion. "It increases our productivity time-wise. We have luck with it compacting virgin aggregates as well."

McQuestion has diversified into recycling/reclaiming and stabilization in recent years, and Wirtgen products have been part of it. In addition to two WR 240i machines, McQuestion & Sons also owns its predecessor, the WR 2400, plus W 2200, two W 2100s and a W 2000 cold mills. It also has a Vögele Super 2000-3i.

In anticipation of future asphalt emulsion and foamed asphalt stabilization projects, the contractor has acquired a new 3800 CR, McQuestion said.