The bridges have a steel frame support and are called delta frame bridges because of the shape of the structural steel support frame, which is an inverted triangle or Greek letter delta. 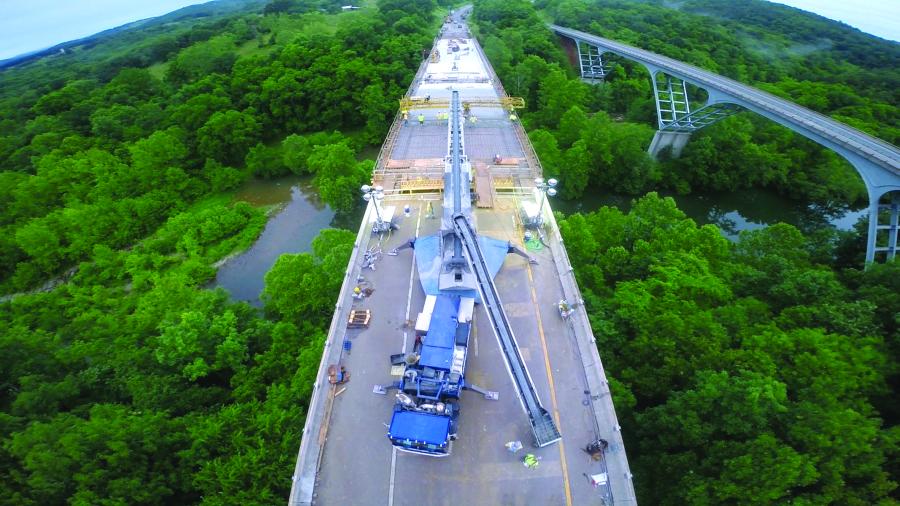 PER Inc. photo The Virginia Department of Transportation (VDOT) is overseeing the rehabilitation of two bridges along Interstate 64 in the Lexington, Va., area.

The Virginia Department of Transportation (VDOT) is overseeing the rehabilitation of two bridges along Interstate 64 in the Lexington, Va., area.

The bridges, which carry eastbound and westbound traffic over the Maury River and Kerrs Creek in Rockbridge County, were designed in 1969 and built in 1976. The bridges have a steel frame support and are called delta frame bridges because of the shape of the structural steel support frame, which is an inverted triangle or Greek letter delta. Each bridge is 845-ft. (257.6 m) long and 43-ft. (13.1 m) wide, and the roadway width is a total of 39 ft. (11.9 m).

The project will rehabilitate the two bridges by repairing the structural steel frames, replacing the deck, reconstructing abutments and providing slope work protection. According to VDOT, completion of this rehabilitation project will allow the bridges to remain open in the coming years and extend their life-cycle by 50 years. More than $20 million is reportedly saved on this project through rehabilitating the bridges rather than replacing them.

The project began on March 12, 2014, and had a contractual fixed completion date of Oct. 6, 2016. However, the contractor is currently behind schedule by more than seven months, and the department estimates the completion date to be June 2017.

The contract value of the project is $12.88 million, and it has received $15.5 million in federal grants under the Transportation Investment Generating Economic Recovery (TIGER) program. The grant program aims to protect critical transportation infrastructure while connecting communities and fostering growth in the regional economy. According to VDOT, I-64 is vital to freight traffic, providing the only interstate connection between Hampton Roads ports and the western Virginia markets and the United States.

The prime contractor for the project is Orders Construction Company Inc. and its project manager is Scott Witman. For the department, the construction manager is Joe Duquette and the area construction engineer is Wayne Nolde, PE.

“Bridge inspections of the two 845-foot long bridges revealed the bridges to be structurally deficient,” Duquette said. “Steel fatigue cracks along the deck and girders will be repaired as well as the joints being replaced. All of the concrete decking and parapet will be removed and replaced with lightweight concrete. Both abutments will be rehabilitated and additional slope protection installed.”

According to VDOT, the existing bridges have a general condition rating of four on a scale of nine.

Structurally deficient means that the condition of any part of the structure has reached a condition rating of four, meaning “poor.” This designation does not mean that a structure is in danger of imminent failure, but that its condition has deteriorated to a point where it should be replaced.

The bridges have steel fatigue cracks along with deck, joint and abutment problems, as well as slope erosion. The bridges are currently inspected twice a year rather than undergoing the normal two-year inspection cycle.

VDOT reports that complete rehabilitation of the bridges will extend their life-cycle for 50 years.

Maintaining production without compromising quality of work was the main challenge noted by Duquette.

“It becomes all too frequent that when schedule slippage occurs, the contractor may request construction sequence changes, overlook details, lack proper oversight of laborers, etc., just to try and make up time,” he said. “Keeping proper communication while enforcing the specification so that this does not occur is key to achieving the quality we look for.”

Duquette explained that the delta frame bridges are over the Maury River in Rockbridge County. This river in particular has a significant amount of recreational sightseers, and is also just upriver from the main water source of the city of Lexington, Va.

“We must take extra precaution to maintain safety of those below the bridge, the environment, as well as protect the drinking water for the local residents,” he said. “In addition to the environmental concerns, we cannot overlook the fact that this type of structure is a rare sight in Virginia and rehabilitating it [is important].”

The job is a multi-phased project utilizing diverging diamond detours which were constructed to route opposing traffic onto the same bridge while the closed bridge is under construction.

Major equipment being used on the job includes a Telebelt concrete conveyor truck, Bidwell concrete screeds, a 65-ton crane, and a Komatsu 300 excavator.

VDOT reported that its Staunton District bridge section facilitated the efforts of the Virginia Center for Transportation, Innovation and Research, Virginia Polytechnic Institute and State University and the design consultant Whitman, Requardt & Associates to develop the plans for this unique rehabilitation project and a subsequent savings.—CEG