The work make sure it will meet the challenges of the 21st century and the area’s growing population. 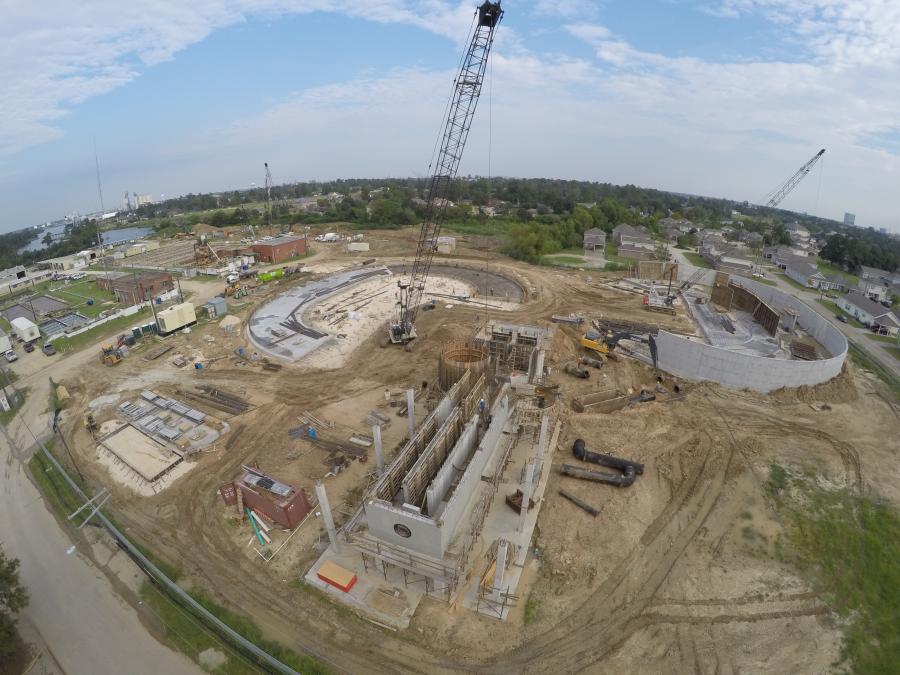 Jared Brown photo In Lake Charles, La., construction continues on a multi-million dollar project that represents the largest single infrastructure investment ever undertaken by the city.

In Lake Charles, La., construction continues on a multi-million dollar project that represents the largest single infrastructure investment ever undertaken by the city. Work officially began on a new wastewater treatment plant in April 2016.

“This project is vital because of the projected growth and expansion taking place in the Lake Charles area,” said John Cardone, Lake Charles city administrator. We're making these improvements now to prepare us for this growth, and to alleviate problems in the future.

“With this new project, we are keeping up with evolving environmental regulations and new technology. The new plant will biologically produce a better, cleaner water effluent during operations, and will help us meet the increasing needs of a growing region.”

Cardone said that making these types of infrastructure improvements is not very noticeable or glamorous, however the new plant will service existing needs within the city while allowing for additional expansion and capacity for future growth.

According to Cardone, a lot of thought and preparation has gone into the planning and investment of the wastewater infrastructure, to make sure it will meet the challenges of the 21st century and the area's growing population. He said construction began this summer, and is expected to last approximately 24 months

“Currently, the walls are being formed and bases poured for process tanks,” said Kevin Heise, division head/technical superintendent of the city of Lake Charles wastewater department. “The auger cast pilings are just about complete, the influent wet well, headworks base structures are nearing concrete pour completion and the Orbal process basins are about 40 percent into the concrete pours.”

The new plant, which is being built next to the current facility, is located on West 18th Street. The demolition of an abandoned public school was performed to prepare the site, along with some general grubbing and the removal of a few small trees.

“The site was previous public property, and spoil bank of local water ways. Poor soils required a fine-tuned geotech research and special considerations during the structural support of the large installations. The plant will have an 8 MGD daily BNR flow and a 35MGD wet weather flow. There will be three 115-ft. clarifiers, two 118 by 170 ft. Orbal oxidation ditches, a self-cleaning wet well and a headworks with two bar screens, two fine screens and grit removal systems.”

The most time-consuming part of the work has involved crews encountering unknown conditions underground.

“We have run into poor soils from the spoil bank areas, abandoned effluent lines and have had to relocate live wastewater lines and work around old fill areas,” said Heise.

Heise also said limited space is among the biggest concerns on the projects.

“It's a very tight site, with subdivision/residential developments land locked at the site. In addition, financially, Lake Charles is a small city. Funding a $43 million dollar capital improvement is a big investment.”

“The biggest challenge so far has been the weather,” said Kenny Ferachi, president of Manchac Consulting Group Inc. and engineer of record for the project. “Early into the project, we received multiple weeks of rain. This causes slowdown, and once the inclement weather is clear, the majority of the time the water must be displaced from the work area.

Recent weather has not been a significant factor, with conditions relatively dry. The work is a rehabilitation project with many different layers.

“This project is a complete overhaul of the plant and will implement modern technology and equipment for wastewater management. The plant is nearly 60 years old. Equipment is replaced when necessary, and additions, like the UV for instance, are added. The process of wastewater treatment is designed in such a way that new equipment and technology can be implemented without any adverse impact on the process.

Some plants are designed with expansion in mind to help any transition to new equipment be as easy as possible.”

The influent pump station is where wastewater first enters the site and treatment process. It is a self-cleaning trench style design that was constructed at grade then sunk in place. The elevated headworks structure is set at an elevation to allow the wastewater to flow by gravity through the entire site until discharge into Contraband Bayou. This structure contains fine screens and grit removal process units.

The project includes oxidation ditches, which are two large racetrack oval-shaped structures. On top there will be long shafts with a circular disk which is spun to add oxygen in the water to create an aerobic environment providing biological treatment. The clarifier splitter box is a large rectangular structure where water is brought from the oxidation ditches to be split among the three final clarifiers.

Solids settle in the clarifiers, and are removed from the process stream prior to disinfection. The small, rectangular UV structure will house light banks that project UV light into water to provide for disinfection.

A good portion of the cast-in-place concrete has been poured. The influent pump station is nearly complete for concrete, with the headworks close behind. More than 50 percent of the oxidation ditch slabs are poured, and the exterior walls are in the process of being cast. The clarifier splitter box is complete. Currently, the clarifiers are having the piles driven. Large ductile piping between the structures is also underway.

“For structures, we are currently in the middle of the oxidation ditches. Once all piles are driven in the clarifier area, work will begin there to pour the slabs and walls. The UV structure is also in the future,” said Ferachi.

The three clarifiers need to be constructed from the ground up. Each installation needs completion of the concrete work. Underground piping must be installed, and pumps and process equipment need to be ordered and installed.

Concrete and steel are required to carry out the work. Main equipment being used on the job includes three cranes, including one set up by a sub-contractor for pile driving in the early phases of the project. Track hoes and a dozer for movement of earth material are also required, along with a dump truck for hauling and moving material. Auger cranes, excavators, specialty concrete forms, standard cranes, concrete trucks, loaders, dump trucks and a variety of concrete pumps are on site.

Ferachi said working on the plant has been both demanding and extremely rewarding.

“It's quite the experience and task, but an absolute joy. Upon seeing the condition of the current plant, the city was long overdue, said Ferachi. “Being part of a project that will bring the city's wastewater process up to par with modern wastewater plants is a fantastic feeling.”

“Seeing the project represents the commitment of creating better water and a better environment,” said Heise. “This exemplifies, in a big way, our goal to make clean water.”