Behind-the-scenes demolition started earlier this spring, but the real work had to wait for the NBA playoffs to end. 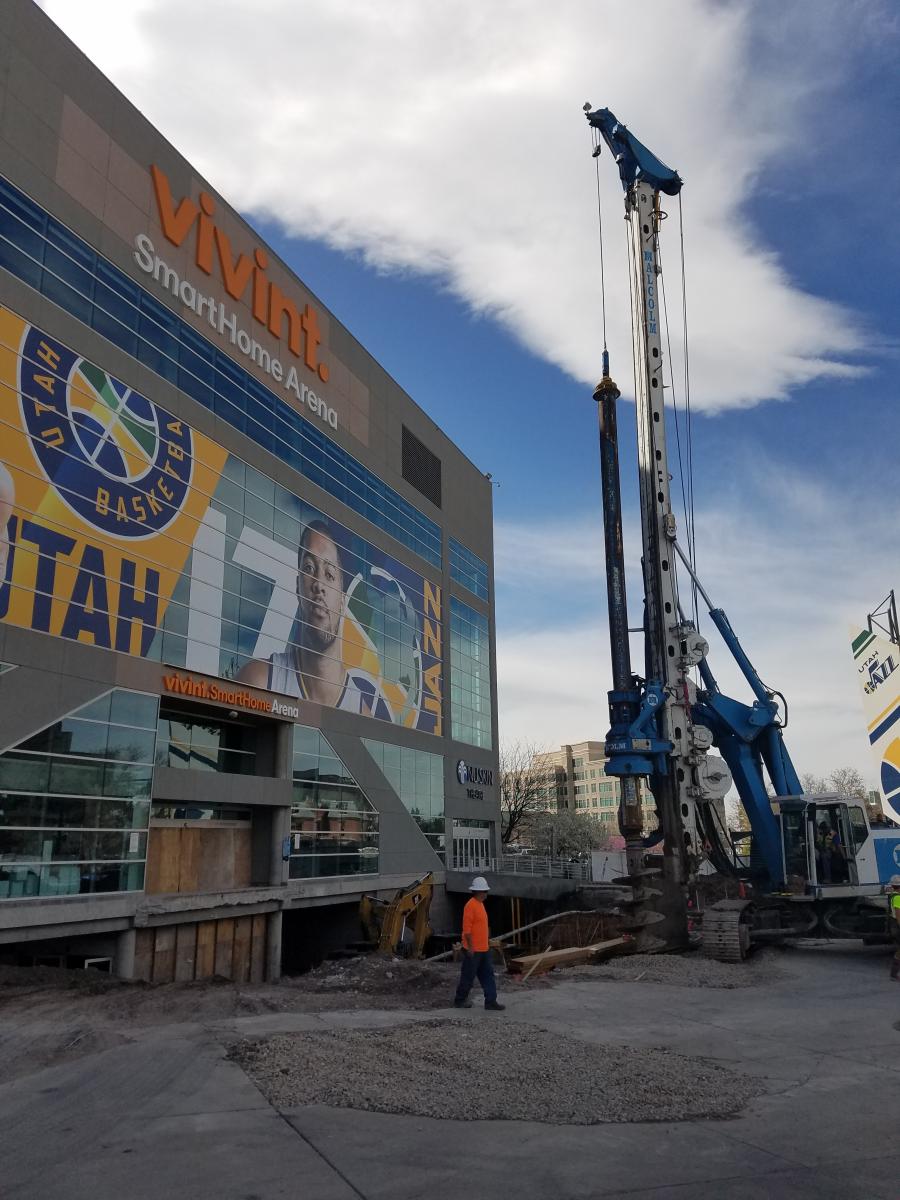 Crews are working with a drilling machine to drill piles, as well as mobile cranes and forklifts.

In 1991, when the home court for the Utah Jazz basketball team was built, construction was completed in record time — 15 months and 24 days.

“At the time, it was built faster than any other arena in the nation,” said Jazz spokesman Frank Zang. Twenty-six years later, the venue, now known as the Vivint Smart Home Arena, is once again the scene of some major construction work as it undergoes a $125 million renovation. But while the renovation may not be record-setting, certainly it feels that way to the contractor. Behind-the-scenes demolition started earlier this spring, but the real work had to wait for the NBA playoffs to end. Now, workers have only until late September to finish the job.

“Our biggest challenge is with the Jazz and their schedule,” said Jeremy Blanck, project executive with Okland Construction Company, a family-owned business based out of Salt Lake City. “We've done arenas and venues before, but this is the largest amount of work in this short of a time period. We'll have upwards of 200 to 500 workers a day, just depending where we're working. They'll be working six -10s, sometimes double shifting. It's really just getting everything orchestrated and done.”

Most of the construction work is interior demolition and interior renovation, Blanck said. While it's not a big equipment job, crews are working with a drilling machine to drill piles, as well as mobile cranes and forklifts.

“You'll see a series of top-to-bottom upgrades on all six levels of the building,” said Zang. “We believe that these changes will benefit everyone who comes to the arena whether it's for sports, a concert or a family show. On the front northeast corner, we're redesigning the plaza area as large open space. When you come to the arena, there's a large opening there. It will be a place where you can meet people and gather together out of the weather before you go into the arena for an event. That addition certainly changes the front porch of the arena. Up on the sixth floor, there will be open private areas that can be used as social gathering spaces. People will be able to stand up there in these casual gathering spaces and see the game from where they are.”

There's also a big emphasis on the food experience, part of a new trend currently being seen in U.S. arenas.

“We have more than 30 vendors that will have a presence in the arena,” Zang said. “Each of the four corners has a marquis local restaurant. There is a real emphasis on the ability to have a lot of dining choices and convenience when you come to the arena for an event. Really, what we are doing in these concourses is we are installing live kitchens so food can be prepared on site. It is the trend where fans are looking for made-to-order. Instead of it being cooked somewhere else, it's prepared on the spot.”

Also generating a lot of buzz are the new fully upholstered, plush back and contour foam seats, which will replace the green plastic chairs that have been in place since the arena opening.

“While we will all miss the green seats, these new cushioned Jazz blue chairs will provide our guests an upgraded experience as they attend Jazz games, concerts and other events in the arena,” said Steve Starks, president of the Utah Jazz and Larry H. Miller Sports & Entertainment. “These new chairs, along with the upgrades to the food, technology and club spaces, will further enhance the game night experience and make the arena feel new again.”

The iconic green plastic seats will be offered to season ticket holders who renew their seats for the upcoming season as a keepsake and thank you for their support of the organization.

“One of our priorities in determining the top-to-bottom improvements has been to make changes that will benefit everyone,” said Steve Miller, chairman of the arena renovation committee and vice chairman of the Larry H. Miller Group of Companies. “The upgraded seats will be for all our guests to enjoy. We have the best and most loyal fans in the NBA and we want to treat them that way.”

The arena will be dark for the summer, then open in time for the Tim McGraw and Faith Hill concert on Sept. 27. The Jazz season opens Oct. 1.

“We're really excited,” Zang said. “We think the renovations are going to bring a lot of new amenities, a new energy around the building. I think it is going to feel like it is brand new.”