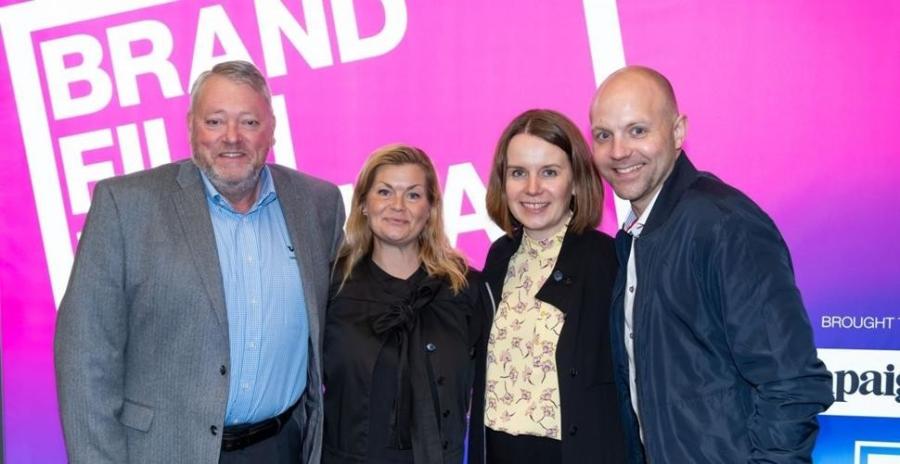 Ian Harvey, Anna Malmberg, Carin Ekenberg Nylander and Per Åkerlund at the awards.

Volvo CE's excavator film Pump It Up won silver for its viral creativity at the Brand Film Festival awards on May 1, while their Volvo Concept Wheel Loader ZEUX in collaboration with LEGO Technic claimed bronze.

Pump It Up was the launchpad for Volvo CE's Excavator For Any Challenge campaign – a brand initiative to boost awareness of Volvo CE's excavator offering to a wider consumer audience. To do that, the film needed to be fun, funky and on point to an audience who knew little or nothing about construction equipment. With currently over 50 million views, the film surpassed even the wildest expectations, going truly viral as well as appearing in printed media around the world. The campaign is being supported by an ongoing series of marketing initiatives, aimed at boosting Volvo CE's market share of the global excavator market.

Revealing the toughness and intelligent engineering behind Volvo's full range of excavators, the film tests the limits of heavy equipment during an exhilarating and entertaining army boot camp, led by mean drill instructor Dolph Lundgren.

The Volvo Concept Wheel Loader ZEUX came about following a number of fun and informal team building workshops in Billund, Denmark, the home of LEGO Technic.

The result was a game-changing model that combines automation and drone technology. The model itself then went on to influence the creation of a number of potentially revolutionary patents for the construction industry.

"We are thrilled to accept these awards. A team of Volvo marketeers, operators and designers worked seamlessly to make these ideas come to life. Some of the stunts in Pump It Up, like the pull-up exercise, have never been attempted before on screen," said Mats Bredborg, head of Brand and Market Communication for Volvo CE.

"I'm very proud of all the hard work that the teams put in. We look forward to another year of successful projects at Volvo CE."