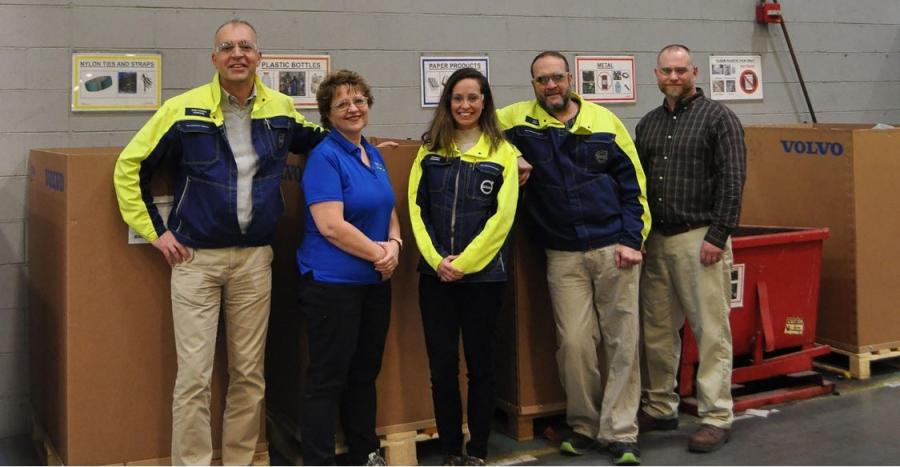 In 2017, according to the Environmental Protection Agency (EPA), the Construction and Demolition industry in the United States created almost 570 million tons of waste.

It's easy to think of waste as being worthless – but it has a huge cost – social, environmental and economic. Of course, it doesn't have to be this way.

As one of the world's largest manufacturers of construction machinery, Volvo CE is working to reduce construction waste and be a positive force for change in the industry.

In 2013, the company's facility in Braås, southern Sweden – which specializes in the design and manufacturing of articulated haulers – became the first Volvo CE site to become carbon-neutral, and now the North America Shippensburg facility is following suit and becoming zero-landfill.

The Volvo CE Shippensburg facility consists of seven stand-alone buildings on 192 acres, with a total area of 838,342 sq. ft. under roof. The site employs more than 800 people.

"The journey to zero landfill didn't happen overnight but was instead a precisely designed and informed process that took place over a few years," explained Rich Halter, safety and environmental manager. "The transition was supported by our waste service provider – Waste Management."

In 2012, office and shop floor areas increased their recycling efforts from multi-stream recycling to an efficient single-stream recycling process. By 2016, the site had implemented composting of pre-kitchen waste, wood pallet recycling, plastic foam and rubber scrap recycling and eliminated one trash compactor that was designated for landfill disposal.

In 2017, all buildings and offices transitioned to multi-stream recycling. Landfill waste began shifting to a Waste to Energy (W2E) facility in York, Pa., where it is incinerated at high temperatures, producing steam that then powers turbines to produce electricity. By the end of 2018, all waste was fully diverted from landfills.

This was no small endeavour and the success of this project is – in part – due to how the Volvo Core Values team conducted the operation in coordination with employees. The team worked closely to involve departments across the Shippensburg site in supporting the move to a zero-landfill facility. Helping empower employees to make good decisions and do the right things and giving everyone at the facility and sense of ownership and shared success.

The outcome of all this work is not just zero-waste, there have been significant reductions in costs for waste handling too. In six years, the site saw its waste handling costs slashed by more than 50 percent.

In 2019 alone, the site recycled 1,171 tons of cardboard, paper, wood, scrap metals and plastics. These efforts equate to saving:

Volvo's team works closely with the waste service provider on new methods to smartly reduce waste and cost. Waste fractions can be tracked and generated for review at any time. All new manufacturing projects undergo a waste evaluation by a Volvo cross-functional team to ensure they meet zero landfill requirements.

To put the site's achievement into perspective, in 2017 more than half (52 percent) of the solid waste in the United States was still being diverted to landfill, versus recycled or converted to energy, according to the EPA. While there is still a long way to go, initiatives like those at Shippensburg show the all-round benefits of embracing a zero-landfill mentality.