If Paulo Baltazar was a betting man, you might say he went “all-in” when his construction company, Baltazar Contractors, wagered its ability to turn a profit on a challenging project. 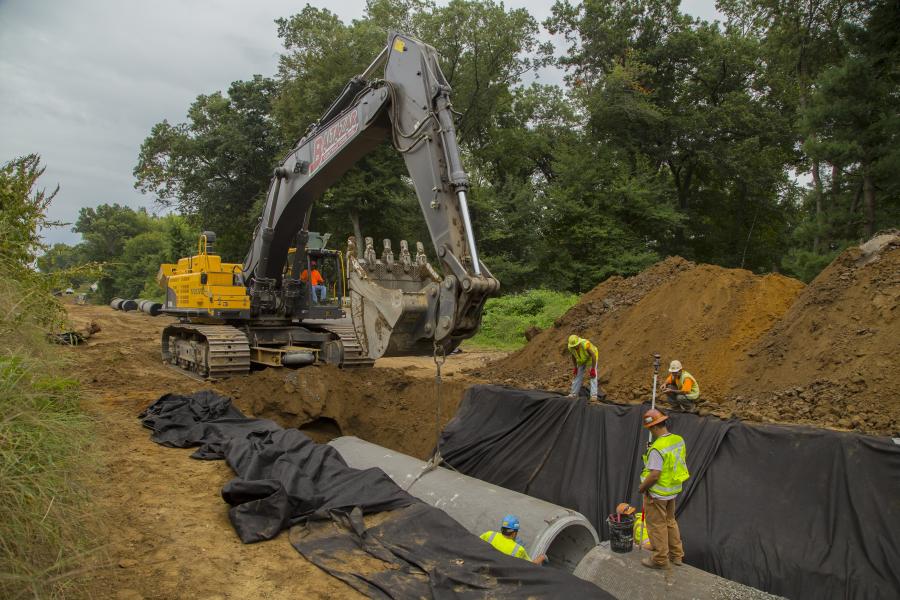 If Paulo Baltazar was a betting man, you might say he went “all-in” when his construction company, Baltazar Contractors, wagered its ability to turn a profit on a $22 million, 6 mi. (9.6 km) water transmission pipeline replacement job with just one excavator — a 77-ton (70 t) Volvo EC700C crawler excavator that could do the work of two machines.

The South transmission main serves more than 28,000 people in the leafy suburb of Springfield, Mass. The 48 and 54 in. (121.9 and 137.2 cm) diameter steel pipe was originally installed in 1928 to funnel water from the 16 million gal. (60 million L) underground Provin Mountain Reservoir. However, due to corrosion and poor weld quality, two major ruptures occurred in recent years, prompting the Springfield Water and Sewer Commission to initiate the planning process for a full replacement of the entire 6 mi. (9.7 km) stretch of pipe. The project was issued for bids in early 2014 and ultimately awarded to Baltazar Contractors Inc., of nearby Ludlow, Mass.

The family-owned company specializes in the installation of sanitary sewer, storm and water mains, site development, roadway construction and streetscapes throughout Connecticut and Massachusetts.

Francisco Baltazar, the family patriarch, and his son, Paulo, founded the business in 1992. More than two decades later, Baltazar continues to thrive under Francisco, Paulo and his brother, Dinis.

The Agawam project, completed in the spring of 2016, calls for the replacement of the entire pipeline, including the installation of 11 valves, 13 air valve chambers, 12 drainage blow-offs, six box culvert crossings, 13 wetland crossings and 13 road crossings. Added to this, neighborhood sprawl has encroached on the pipeline's path in many areas, leaving a slim 80 ft. (24.4 m) right-of-way to position equipment.

Because the South transmission line is the region's primary water source, Baltazar Contractors is performing construction in three phases to limit service disruptions. Each phase involves the installation of a section of 48 to 66 in. diameter pipe, and related valves and infrastructure. Once delivered on-site, the replacement pipes are individually numbered and thermal-welded together like pieces of a snaking jigsaw puzzle.

The sheer scale of the project, plus unforeseen hurdles, prompted Baltazar to rethink how they would complete the job.

“The original plan was to cut the existing pipeline into segments, grab hold of the old steel pipe, and pull it out by wedging it in the bucket and place it to the side. Then we'd attach the new concrete pipe to the bucket via a chain sling and swing it back into the trench. However, the previous excavator could not lift the pipe with the bucket attached. We were losing three and a half minutes per pipe by taking off the bucket and reattaching,” said Luis Santos of Baltazar Contractors, project manager for the Agawam project.

“The competitor machine was constantly maxed out, revving and burning more fuel. When we went for the Volvo EC700C, with the way Volvo designs its excavators, you do not need to run them at max horsepower.”

That's because the crawler excavator is powered by a 451 hp (336 kW) Volvo D16E engine, which works in harmony with the electro-hydraulic system to deliver increased horsepower and fuel efficiency, according to the company.

“For this application, the excavator can run at about three-quarters throttle, around 1,400 rpm, and that is where you also start to see the fuel savings,” he added. “It's not taxed at all and that also makes it more stable on the uneven terrain. Even though it is a next step larger in size than what they were using, because of the lower working engine speed Baltazar is actually saving fuel, which we know because we are tracking consumption through the Volvo CareTrack telematics system.”

The partnership was a success. “We have been very impressed with the excavator's picking power at maximum reach as well as the smoothness and response time,” said Paulo Baltazar.

Productive From the Inside Out

Once on-site, the Volvo EC700C placed the pipes faster than pipe manufacturer, Vianini Pipe could produce and ship it from Somerville, N.J.

Dana Kroll is the main operator of the Volvo machine. With 27 years of running equipment, he knows what sets a machine apart from the competition. In terms of the operator environment provided by the class-leading Volvo Care Cab, Kroll is satisfied.

“The comfort factors — are you kidding me? I'm seeing the chiropractor a lot less. I also find the controls to be very smooth, especially when you are lifting a 9.97-ton [11 t] pipe and placing into a hole. It's been a tremendous machine for us,” said Kroll.

With Volvo machinery, Santos' initial estimation that Baltazar would complete the entire project three months ahead of schedule proved accurate.