No task is too difficult for the MC115C skid steer loader. 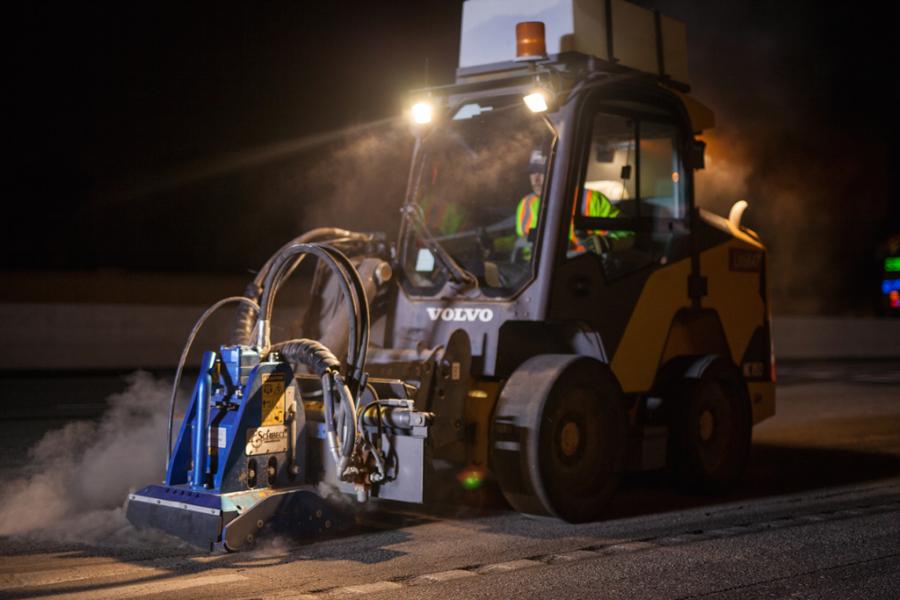 No task is too tough for the MC115C skid steer loader, lighting the way to a productive operation.

The first painted highway centerlines were inspired in 1911 by a leaking milk wagon, dribbling a white trail down the middle of a dirt road. More than 100 years later, road surface markings rank alongside inventions like three-point seatbelts, airbags and traffic lights in helping keep motorists safe.

While the use of milk may have scored highly for creativity, the ensuing decades have brought sophisticated materials and processes to amplify the visibility and add durability to road markings, including the use of thermoplastics, anti-skid markings, 3M traffic tape and reflective pavement markers.

Payco Specialties, a family-owned road marking company, has established itself as a key-player in the industry, with some 40 years' experience. Located in the San Diego suburb of Chula Vista, Calif., Payco's primary focus is on permanent and temporary stripe application and removal, reflective pavement markings, cutting custom stencils, parking lots and airport striping.

“In the late 1970s, no one built custom road striper trucks,” said Jeff Llewellyn, vice president of Payco Specialties. “Even today, there are only a few companies committed to building these machines.”

“We were the first company to install video guidance cameras on our paint trucks to ensure straighter lines,” he said. “We even added operator seats four inches from the ground, giving reflective pavement marker operators greater access to their work.”

Payco also developed a short, narrow-bodied long line thermoplastic striper truck. The machine is suited to the confines of city streets and has the capacity for high-paced freeway work, paving the way for more job opportunities.

With roads busy during the day, 95 percent of local paving and associated resurfacing work for the California Department of Transportation (CalTrans) occurs at night to avoid causing traffic congestion. In the San Diego area alone, motorists spend an extra 42 hours per year in traffic delays, according to the 2015 Urban Mobility Scorecard.

Any delay in production is subject to severe penalties that could throw a project off-road. “On most major CalTrans jobs, in the first minute you are late, they can fine you up to $10,000 and $1,000 for every minute after that,” said Llewellyn. “Being just five minutes late can mean giving up the entire job.”

Responding to the pressure to perform quickly, Payco looked to Volvo CE's Services' branch in nearby Lakeside for support. Llewellyn compared side-by-side specs of skid steer loaders from different manufacturers, looking for the one with the strongest hydraulic flow and greatest visibility from the cab.

“Volvo skid steers have a very high rate of flow and head speed,” he explained. “For example, in second gear, we reach around 13 to 14 mph. Compared to the competition, the MC115C has the ability to cut the time taken to remove reflectors from a four-mile freeway closure by half. Plus, we benefit from a fully enclosed cab with air conditioning and heated seats for less than the closest competitor.”

To enhance performance, Payco's industrialist team developed a proprietary modification to the skid steer loader that uses a specially-fitted plate welded to the front bucket edge. As a result, the MC115C removes the reflectors more efficiently at high speeds.

The MC115C also comes standard with two forward and two rear lights, enabling operators to see clearly at night. “I like the price, and the operator likes the performance,” Llewellyn added.

In addition to providing good visibility from the cab and easy side-door access, the single arm design of the skid steer loader is built with high tensile steel to withstand the shock-load of repeatedly popping reflective markers from the pavement. Over the past three years, the machine has racked up almost 2,000 hours.

Powered by a 74 hp (55 kW) Tier IV Final Volvo engine, the MC115C has a hydraulic flow rate of 33 gpm (125 Lpm) and a 2,600 lb. (1,179 kg) lifting capacity, making the machine suitable for multiple applications. Digging holes for roadside signs, for example, is completed with the use of an auger attachment. The machine also is fitted with forks to load 2,000 lb. (907 kg) pallets of thermoplastic powder, a job previously performed by a compact wheel loader.

Satisfied with the skid steer loader's performance, durability and versatility, Payco added a second Volvo MC115C to the fleet to grind off thermoplastic striping from roadways during relining projects.

Company president, Rebecca Llewellyn, is a pioneer for women in the male-dominated construction industry. Of his mother's achievements, Jeff Llewellyn said, “She serves on the Caltrans Small Business Council to make sure they understand how a $170 million infrastructure project whittles down to the smallest contractor. It's important they hear that voice when they are crafting their policies and procedures.”

Payco remains a private, family-owned company with around 20 employees. To cope with the ever-growing volume of work, Payco relies on Volvo machines that work quickly and efficiently. Strong machines and an equally strong work ethic form the foundation for the company's success.

“Our reputation is our best product,” said Llewellyn. “That's why Payco is still here nearly half a century later.”