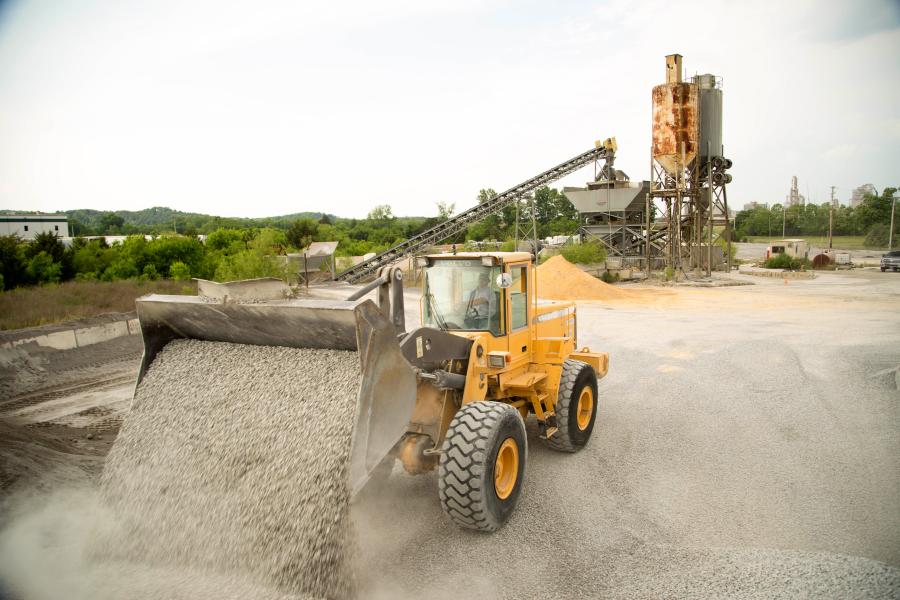 The used Volvo L120D wheel loader was purchased in 1999 and is still in operation.

Nestled in the southeast corner of Tennessee, the small town of Cleveland is known for its stunning mountaintop views, rich history as the home to the Cherokee Nation and abundance of farmers' markets stocked with local produce. The region also is the birthplace of family-owned Bradley Concrete and Lambcon Ready-Mix.

“Our entire family has always been in the rock business, starting with my great-grandfather, who was one of the original Lambert Brothers,” said Kirk Lambert, owner of Lambcon Ready-Mix. “They were probably the largest quarrying outfit in the country when they sold to Vulcan Materials in 1958. That was when my grandfather, George Lambert, made the bold decision to crush on his own.”

Following in his father's footsteps, Kirk's father, Steve Lambert left his post at a concrete plant in Dayton, Tenn., and set out to make his dream of hauling concrete from Chattanooga to Knoxville a reality. With just three trucks, Steve started Bradley Concrete in Cleveland, Tenn., in 1978. He ran the company on his own until his two sons Kirk and Adam graduated from college and were ready to become part of the family business.

In 1997, the Lamberts decided to concentrate efforts on growing the ready-mix business, but it wasn't until 1999 that things started to take off. “I dove right into this wheel loader market and tried all of them,” said Kirk. “It became obvious that Volvo machines were the best choice for us.”

The Lamberts settled on a used L120D with 3,000 hours on it. “It had a rusted bucket, but we didn't have the budget for a new loader,” said Kirk. “I loved the tractor, so our Volvo representative added a new bucket for us with new pins. It runs to this day, now with over 20,000 hours on it.”

Speaking with pride, Kirk said, “By itself, it just loaded all the materials for a two million square foot Amazon distribution center and a 400,000 cubic yard poly-silicon chemical plant, supplying all the concrete from the ground up.”

Almost two decades since its inception, Lambcon Ready-Mix boasts six plants employing about 25 employees each and more than 100 trucks. With locations in Chattanooga, Knoxville, Athens, Cleveland, Lenoir City and Ooltewah, the Lamberts service small residential jobs all the way up to huge manufacturing plants and even bridges.

Another key factor when considering new equipment is visibility from the cab and ease of operation. “Loaders are big machines and can be dangerous, so having a full range of vision is important,” said Kirk. “Safety-wise, the cameras and monitors are indispensable, but overall visibility at all pivot points is hugely beneficial.”

In addition to visibility, comfort is critical. “Operators are in the cab twelve hours a day, so it needs to be comfortable. Plus, the levers and controls are where they should be,” Kirk said.

Kirk said that he likes the machines because they are nimble. “Quickness comes in very handy when feeding a plant that puts out lots of volume, and you have to load different types of materials.”

Volvo machines are incredibly powerful through purposeful design, according to the company. Volvo loaders get their power from the curl of the bucket. The success of each job depends on sending the appropriate amount of power where it is needed.

Keeping It in the Family

Kirk speaks with the confidence about his company.

“A ready mix concrete plant is a simple process. Making concrete is easy, but it's complicated to get right. Everything is done by weight, which is tough because we sell in volume. The computers calculate the amount and load the trucks through automation,” he said. Lambcon uses natural sand and crushed limestone sand to tailor each ready-mix concrete depending on the application. Because Lambcon plants are what are known as dry-batch plants, the customized concrete is mixed in the truck drum on its way to the job location.

Committed to quality and customer satisfaction, the Lamberts' family values are foundational to running a successful business.

The Lambert family understands that a local, personal touch is important to customers. This ethos finds its way all the way down to taking pride in how clean their trucks and machines look to outsiders. Kirk said, “When our trucks drive by, you know it.”