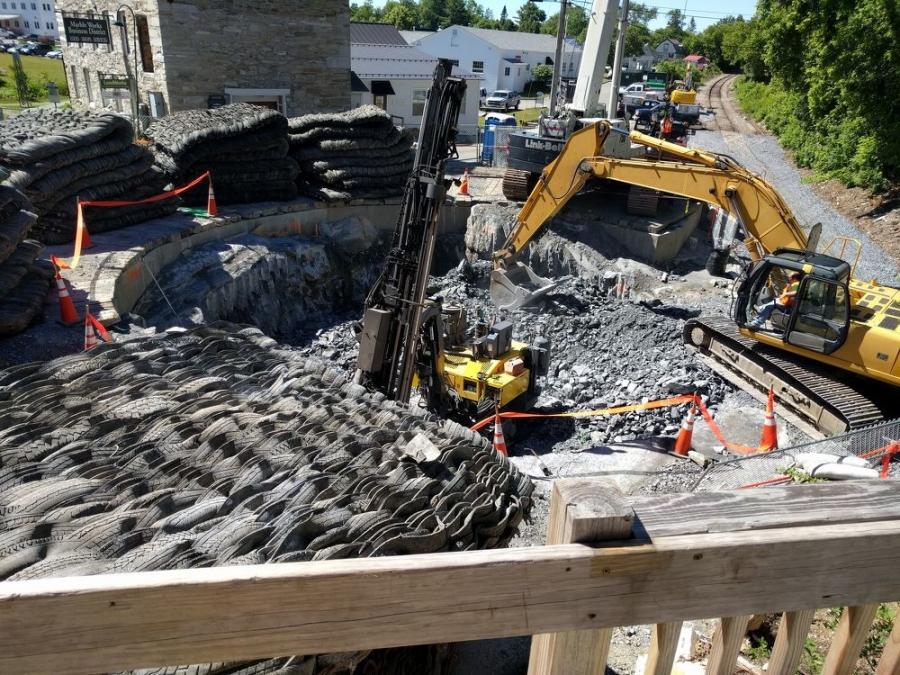 In an effort to permanently replace two aging rail bridges with a tunnel, the Vermont Agency of Transportation (VTrans) is working with the town of Middlebury on a complex project that will take years to complete at an estimated cost of $71 million. The work comes not a moment too soon. 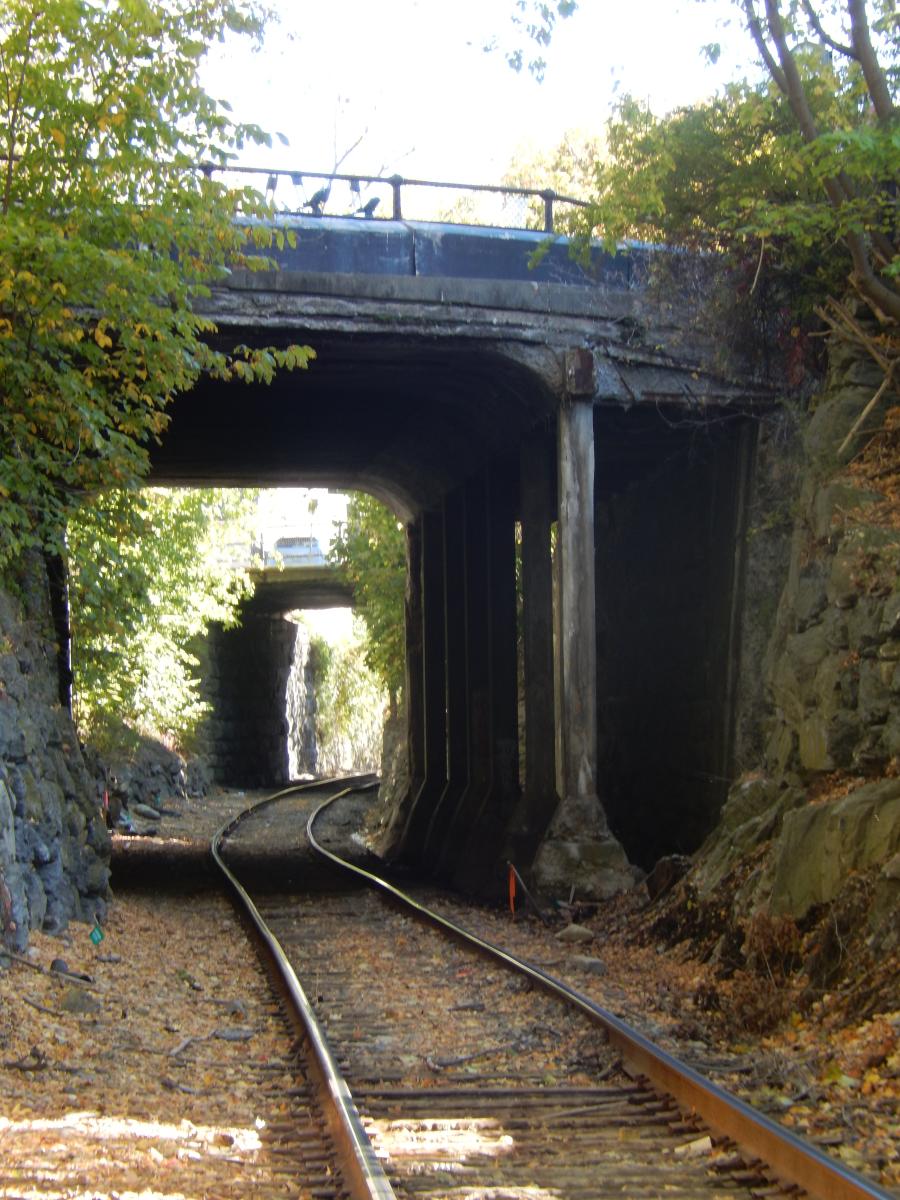 Both the Main Street and Merchants Row bridges have been demolished. The tear downs took place in 2017.

“The two bridges were removed over a four-week period,” said Pockette. Each road was closed about 10 days, while the temporary bridges were installed. The concrete railroad bridges were replaced by a Maybey Bridge structure for vehicles. A separate wood, pedestrian bridge also was constructed alongside the vehicle bridge.

The 360-ft. tunnel that will replace the Main Street and Merchants Row bridges will address several rail deficiencies to improve rail alignment, safety and operations.

“Track and ties near the end of their useful life will be replaced,” said Pockette. “Continuous welded rail will be installed at the end of the project, replacing the existing jointed rail. Vertical clearance will be increased by about three feet. Currently, double-stack rail cars cannot be accommodated, and increasing rail capacity is an important long-term objective for the state.

“Future commuter rail service is scheduled to connect Albany and New York with Burlington and Montreal. A new drainage system will be installed. At present, there is standing water in the railroad bed much of the year.”

The project involves balancing community needs and character, and addressing local and regional mobility and construction feasibility, while keeping the rail line active, except during the 10-week closure period, as communities along the line depend on rail for deliveries of various commodities. 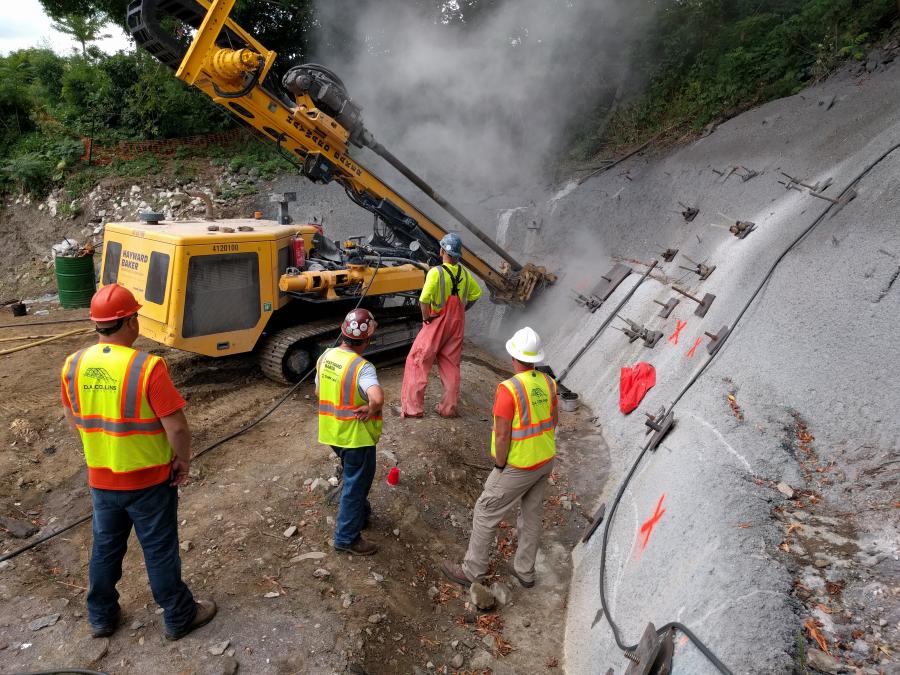 “The town of Middlebury and VTrans have developed a partnership moving the project forward. A community liaison funded by VTrans, but employed by the town, has provided daily outreach to local citizens and businesses. Through this partnership, the state and town have been able to identify and resolve issues and devise solutions that benefit both. The town has been able to take advantage of the project's need to move utilities and have them buried underground. Also, the new drainage system for the railroad will collect and treat stormwater from downtown streets, resulting in cleaner discharge into Otter Creek.

The agency will use accelerated bridge construction methods to build the tunnel, which will require a road closure in 2020. Currently, the town is spearheading a planning process on how to redesign new parkland that it will receive, once the tunnel is built.

Detailed discussions between utility companies, property owners, and municipal departments have been crucial. Coordination between VTrans and Vermont Railway Services, the railroad operator, was required for the 10-week closure period of the active rail line. Additional projects have been necessary to accommodate railroad services during the closure period.

The deterioration of both bridges has worsened with time. Concrete cracking, delamination and spalling had occurred on all bridge components. Embedded steel reinforcement was rusted and exposed. There also was leakage through the deck and full depth holes on the Merchants Row sidewalk that had to be patched.

Since last year, officials have been especially concerned about the deteriorated condition of the sidewalks and concrete that's fallen onto the railroad tracks. A sudden, unplanned emergency closure would result in road closures in downtown Middlebury for several months. VTrans decided to remove both bridges and install temporary bridges, until permanent structures are built. Both the Main Street and Merchants Row Bridges were demolished in July/August 2017, and travel was restored roughly a month later.

The tunnel that will replace the Main Street and Merchants Row bridges will address several deficiencies now facing the railroad. Currently, the bridges do not have enough vertical clearance for double-stack rail cars. By lowering the rail bed approximately 4 ft., clearance can be increased to 21 ft., without impacting the grade of the road and sidewalks above.

The tunnel also will allow for the alignment of the rail to change, softening the curve that now exists, allowing improved horizontal clearance for trains. Drainage improvements and covering the track will reduce the risk of icing problems that have been severe during some winters, as well as ponding that occurs.

The project team has focused on placing utilities in the Printer's Alley underground to prevent interference with the crane needed to construct the tunnel. Acquiring right-of-way, both temporary and permanent, also has been necessary, along with negotiating with Vermont Rail Systems about feasible work windows that enable construction to be completed without interrupting rail service.

Officials also had to design the project to mitigate risk from the 100-year flood level of Otter Creek. Developing a communication and outreach program to identify and respond to community concerns was another consideration. Before proceeding with construction, VTrans also conducted an environmental assessment, in accordance with the National Environmental Policy Act. 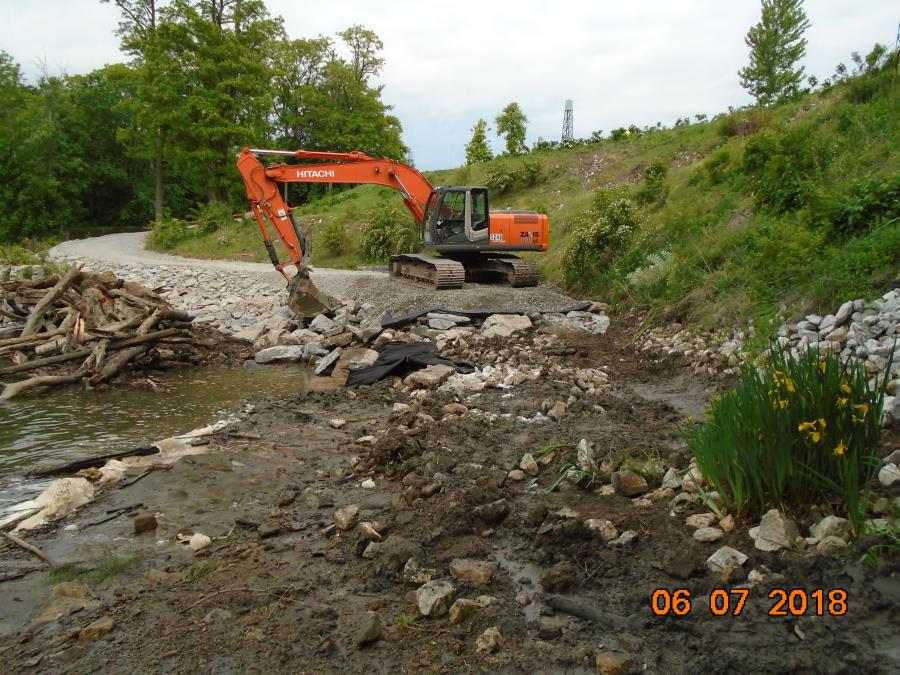 Tasks already completed include tree clearing and the installation of temporary bridges. Access roads are currently under construction, along with the drainage system. The stabilization of excavation also is under way.

Replacing the two bridges in the center of Middlebury with a tunnel is no simple assignment. It has involved collaboration with the town, detailed planning to understand the full scope of the project and its impacts, as well as creative thinking to incorporate improvements that will benefit both the town and state. There also has been a commitment to adjust work schedules, so as not to interfere with important community events.

In addition to the replacement of existing bridges, building the tunnel calls for installation of drainage, the moving of utilities, stabilization of excavation, installation of the tunnel, construction of new roadways, construction of park amenities and site stabilization. This amounts to four years of construction activity. On year three, there will be a 10-week road closure. Two years of activity will be largely focused on site preparation and restoration. 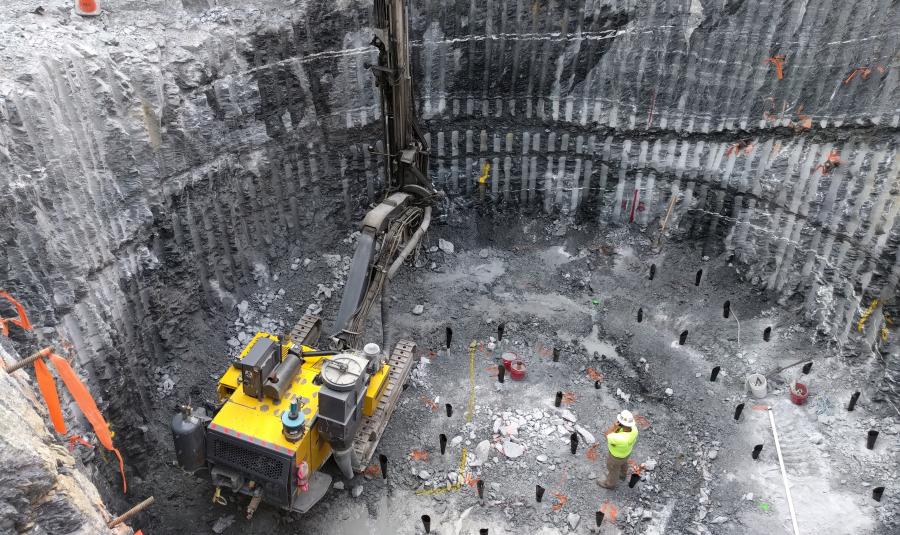 During construction there are safety plans in place for general work activities, drilling activities, confined spaces and blasting operations. There also is a monitoring plan in place for historical structures and railroad infrastructure, including seismographs, settling monitoring points, crack gauges and displacement monitoring points. Coordination between the contractor and the Middlebury fire department has been ongoing for confined spaces and emergency extraction plans.

Bridge rehabilitation was given serious consideration, but was not a viable option. No part of the original bridge decks and supporting structures were considered salvageable and rehabilitation wouldn't improve two current deficiencies that affect rail.

In addition, relocation was one of four alternatives studied. In 2013, a report concluded moving the railroad would create unacceptable impacts to existing buildings, historic resources and would not be cost-effective.

Pockette emphasized that the ongoing construction has not happened overnight, having undergone extensive planning and public involvement.

“The construction manager/general contractor process is being utilized for the design of this project. VTrans, Kubricky Construction, designers VHB and the town of Middlebury have been meeting for several years, planning and designing the project.”