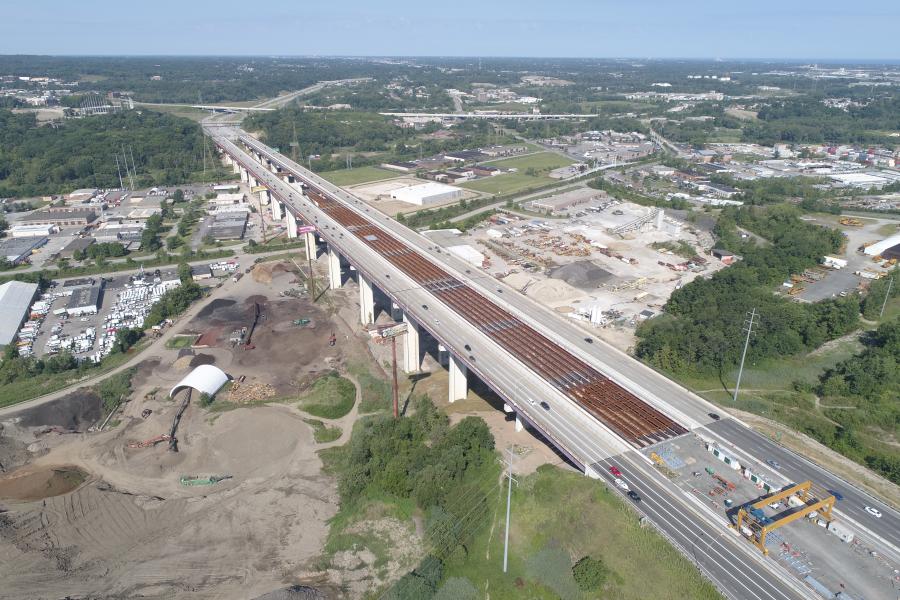 Solid progress is being made on the multi-year $227 million, design-build I-480 Valley View bridges deck replacement project in northeast Ohio. (ODOT photo)

Solid progress is being made on the multi-year $227 million, design-build I-480 Valley View bridges deck replacement project in northeast Ohio, an Ohio Department of Transportation initiative that began in November 2017 and will be completed by June 30, 2024.

The initiative — constructionequipmentguide.com/walsh-construction-leads-major-227m-i-480-bridge-work/40176 — also includes the construction of a new east-west bridge between the two existing bridges that will ultimately carry two lanes in each direction.

The contract, awarded to Walsh Construction Company, is re-decking and renovating the twin bridges (in Cuyahoga County, four lanes in each direction) that link Valley View with Independence, which spans the Cuyahoga River, Ohio and Erie Canal, and CSX rail lines, as well as crossing Canal Road, West Canal Road, and the Ohio/Erie Towpath Trail.

The two bridges, constructed in 1975 and opened to traffic two years later, are steel multi-stringer highway girder types that are 212 ft. above the river. The longest span is 300 ft. long. Up to 180,000 cars and trucks cross the bridges daily, and traffic volumes are not expected to change with new bridge construction.

At more than 40 years old, the lifespan of the decks has been maximized and are showing their age.

Crews have been busy working on the new center bridge and according to ODOT, 90 percent of the substructure and 75 percent of girder erection have been completed, with the remainder to be completed by the end of spring. Walsh plans for bridge deck pours, to be complete next summer. 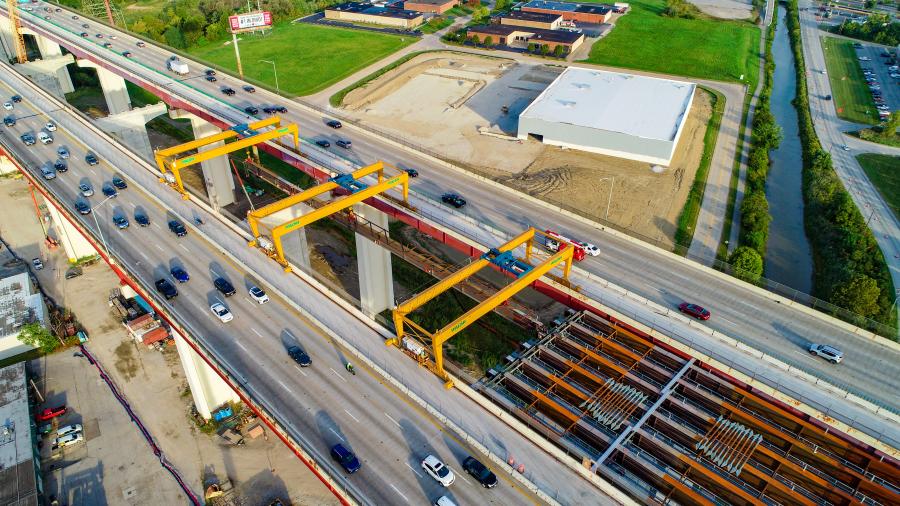 "The new bridge is expected to be used in fall of 2021," said Amanda McFarland, Northeast Ohio Public Information Officer, ODOT Office of Communications. "That's when eastbound traffic on the current bridge will shift to the new one to allow the old eastbound bridge deck to be replaced. That will take about a year to complete. In fall 2021, traffic will be shifted again. The westbound traffic will then use the new bridge while the old westbound bridge deck is replaced. That deck replacement also will take one year. In fall of 2022 traffic will return to its original configuration, as it is today, so that a middle divider can be added to the new bridge to separate traffic."

Last spring saw the start of the steel erection for the new bridge, which led to four lanes on the east and westbound bridges to be shifted to the right to accommodate the many heavy pieces of construction equipment — an arrangement that will remain in place until next fall. The work platform will be placed under the existing bridges, with the first work platform scheduled to go up in 2020 under the eastbound bridge. Concrete barriers on the bridges separate the traffic from equipment and workers.

Substructure work continues through the winter months into early next year and steel erection is scheduled to begin in late winter. 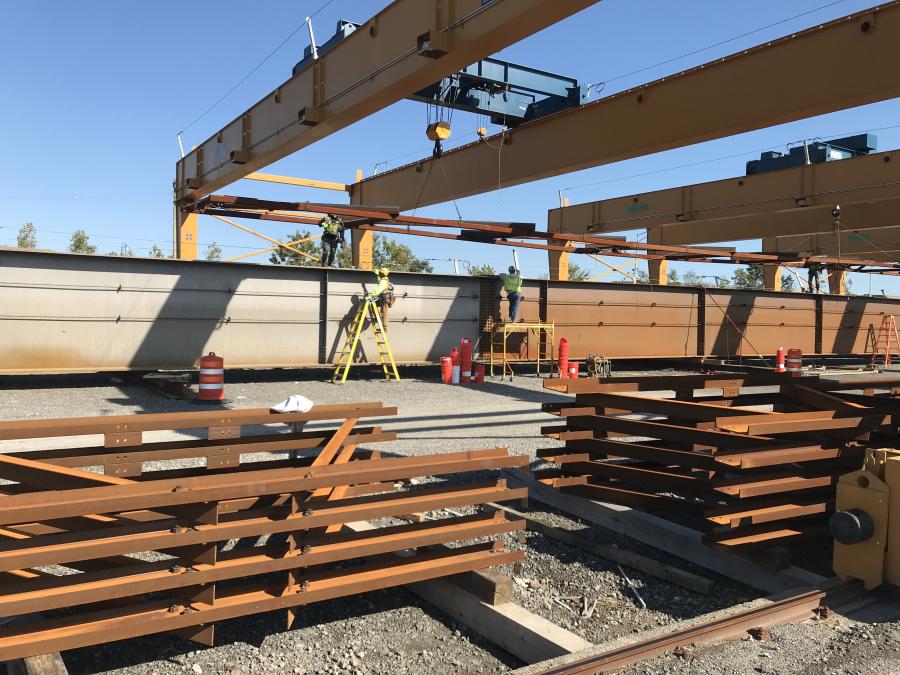 "Weather, especially the wind is one of the biggest issues," said Kirk Gegick, ODOT project engineer. "Wind limitations on crane work down below in building the columns and caps has been a factor, as well as on the gantry cranes and setting the steel. Minor weather delays in 2018 were made up during the 2019 season."

The pile driving has been completed.

"The footing at pier 14, was supposed to be constructed as a spread footing on rock," said Gegick. "We changed it to a pile supported footing, instead of a spread footing on rock when it was discovered that the rock was not found to be at the anticipated elevation. We're sequencing the work to keep work moving during the redesign of this location. It could have been a bigger delay without the partnering of the contractor and ODOT."

Safety measures are a constant on the project.

"Load analyses were completed ahead of placing and using the gantry crane system," said Gegick. "The crane system is very sophisticated and ensures that each load carried across the bridges is distributed within the limitations required by the analysis. ODOT has restricted overweight loads being allowed to cross the bridge during construction of the new bridge.

"Walsh is very proactive at safety," he added. "Examples of this include: the use of leading-edge retractable harnesses, a strategic partnership with OSHA and local unions, the use of flip charts on gantry cranes to clearly list load limitations for steel erection, and real time scheduling of steel deliveries to prevent overweight loads from operating on the bridges while steel erection is ongoing. ODOT is also taking steps to ensure that construction materials can be delivered efficiently.

All superstructure materials will be delivered in the existing mainline median area.

"The area is wide enough to accommodate even the largest girders," said Gegick. "Traffic was shifted across the bridge, and a portable barrier was put in place to create a safe environment for motorists and workers and to accommodate deliveries. "

A shared project management office allows for face-to-face communications throughout the day.

"We have a commitment to a project partnering process and a dispute resolution process is in place for addressing issues," said Gegick. "Maintaining strong partnering will continue to keep this project moving smoothly and on schedule. Lessons learned from the new center bridge superstructure will be applied to the existing bridge deck replacements. High power overhead aerial lines above the bridge created a clearance issue that was addressed. We also ensured that underground electric duct banks next to pier 4 were not disturbed during pier construction." 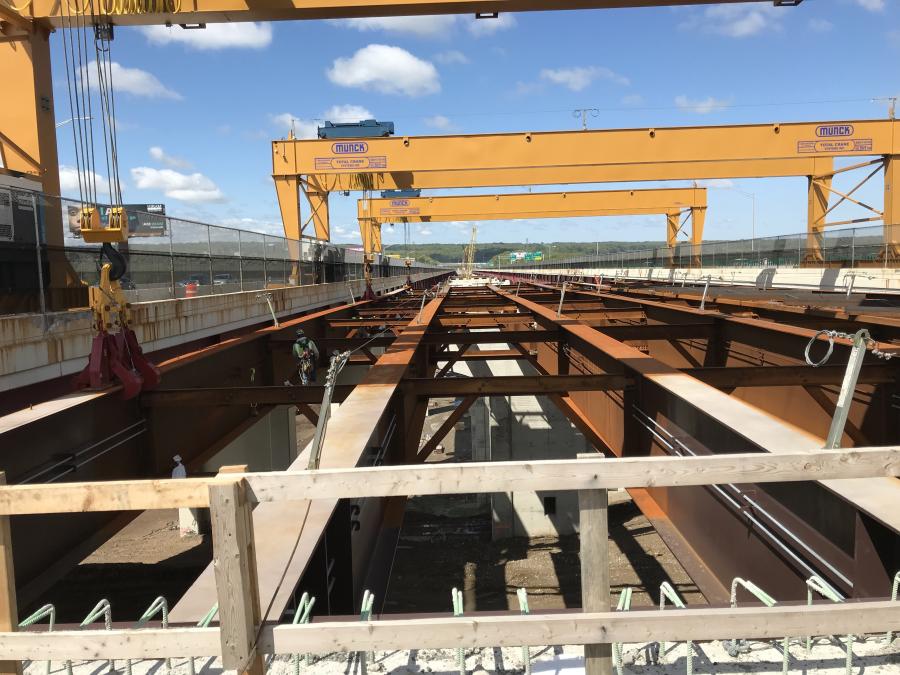 Cranes are crucial to the work and a sophisticated system of three interconnected gantry cranes that can be operated by a single operator has been set-up. Each crane has been equipped with a laser guidance system to ensure specified distances between them. The bridges support the weight of the cranes, and the cranes travel via a rail track that spans the length of both bridges.

"The proximity of the existing bridges, 2.5 feet between the parapet walls of each bridge, and their height is a challenge," said Gegick. "Setting up the rail system took a couple of months during the winter. The cranes, specially made for the project, took several months to fabricate and be shipped to the project. Once they arrived, it took two weeks to build them and another week to set them up."

Routine physical inspections of the bridges every two weeks during steel erection are done to monitor the condition of the existing bridges.

"The gantry cranes are not only used to erect structural steel, they are also used to support the entire superstructure operation," said Gegick. "Use of the gantry crane system is dependent upon the wind conditions, and work will continue through the winter months, weather dependent. The substructure work began in 2018 and steel erection began last spring when the substructure had progressed far enough to give the steel crews the space they required. Once the girder placement work had progressed enough, work began to ready the bridge for deck pours."

The pour sequence on the new center bridge will be across the Valley from east to west, just as the girders are being set.

"Each individual pour will be approximately 300 feet long and there will be 15 pours on the new center bridge," said Gegick. "The concrete will be delivered on the eastbound bridge work zone for the new bridge. A conveyor is being used to distribute the concrete across the width of the new bridge. The pours will be completed at night from approximately 6 p.m. to 6 a.m."

Due to the scope of the work, other general contractors are following the project and presentations have been given at industry conferences regarding construction of the new bridge.

No work has been done on either of the existing bridges up to this point to prepare them for bridge deck replacement operations. The deck removal operations will begin in late fall/early winter 2020. 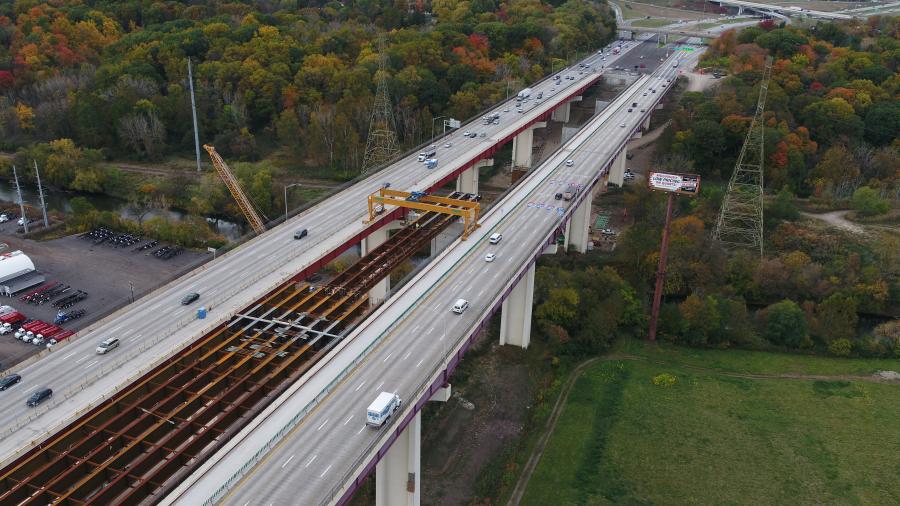 "The current plan is to recycle the deck slabs into crushed recycled aggregate," said Gegick. "The reinforcing steel will be sold for scrap and recycled into other steel products. None of the material will be recycled for use on this project."

When completed, the bridges will give motorists a smoother drive and a safer one, which includes fencing, parapet walls and most importantly six lanes in each direction.

"The new bridge will be nearly identical to the two existing bridges," said Gegick. CEG