In 2018, Walsh Construction, one of the largest contractors in the United States, began a $172 million project to rehabilitate the historic Merchant's Bridge — the oldest rail structure over the Mississippi River. The 4,340-ft. bridge connecting St. Louis, Mo., and Venice, Ill., was built in 1889 and had become functionally obsolete with only one rail in use and weight restrictions in place.

The project is being overseen by the Missouri Department of Transportation (MoDOT), the Bi-State Development Agency and the Terminal Railroad Association of St. Louis (TRRA).

In September, Walsh hit a major milestone with the installation of the first new bridge span (see Merchants Bridge Reconstruction Project Reaches Major Milestone below.) The 520-ft., 9 million-lb. steel truss was floated into place on barges and lifted into position with Mammoet gantry cranes. This truss replaced a 3-million-lb. structure, which is being dismantled with the help of a John Deere 470G excavator with a 995R Genesis shear attachment, obtained by Walsh from Erb Equipment Co. 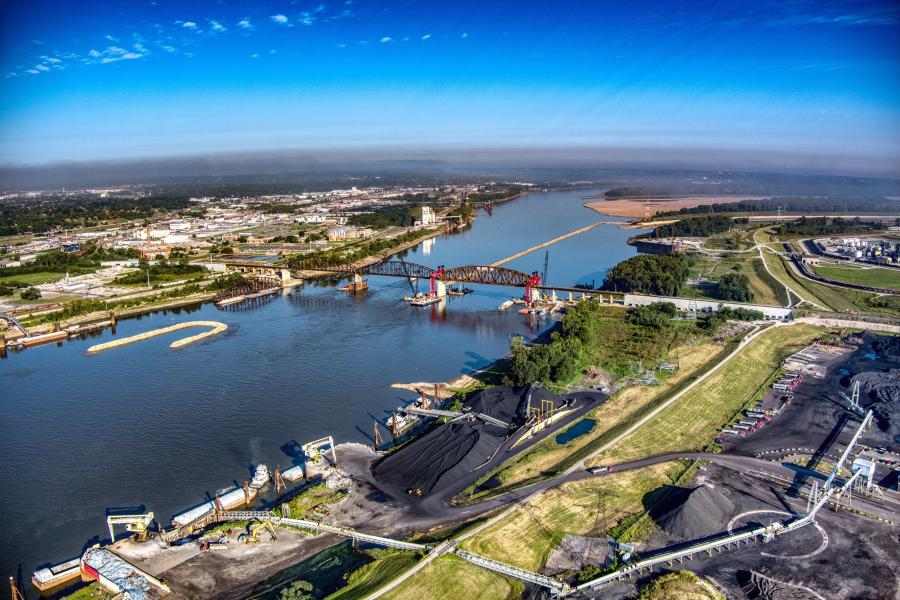 Brent Phelps, territory sales representative of Erb, the local John Deere dealership in St. Louis, was on site with Walsh Construction's Chad Barton, project engineer, as they discussed the project and the equipment.

"We're honored to partner up with a company like Walsh to help this historic project — the Merchant's Bridge — be refurbished," said Phelps.

Replacing the trusses will allow service to return on both tracks and eliminate the current weight restriction, relieving congestion and reducing delays for maritime and vehicular traffic.

"Working with Erb, we have our first truss down and have started the demo process," said Barton. "About 3 million pounds of steel will be eaten alive by that Genesis 995R."

The Genesis GXT 995R mobile shear is designed to process steel and other materials efficiently in demolition applications, according to the manufacturer. Weighing in at 20,000 lbs., the 995R has a jaw opening of 39 in., jaw depth of 42 in. and a reach of 14.2 ft. It features a center of gravity closer to the excavator, which allows it to mount to lighter-weight excavators that previously could not handle more powerful shears. Its reverse-mounted hydraulic cylinder shortens shear length and reduces weight.

"We brought in the 995 shears specifically for this project and it pairs up nicely with the John Deere 470," said Phelps. "I think that's going to be a good combination."

Barton said Walsh plans to have this part of the project wrapped up by December 2022.

Walsh Construction, part of The Walsh Group, was incorporated in 1949 in Chicago. It is one of the largest general contracting, construction management and design-build firms in North America.

It operates out of regional offices throughout the United States in the building, civil and transportation sectors.

The $222 million project to replace the Merchants Bridge that links Missouri and Illinois at downtown St. Louis reached a major milestone Sept. 17, with the first of three new trusses being installed.

Dating back to 1890, the Merchants Bridge serves six Class I railroads and Amtrak to cross the Mississippi River at St. Louis and is one of the nation's primary east-west rail corridors serving the nation's second largest rail hub by car interchange volume and third largest by gross tonnage. The replacement of this vital rail artery is the bi-state St. Louis region's top freight infrastructure priority. 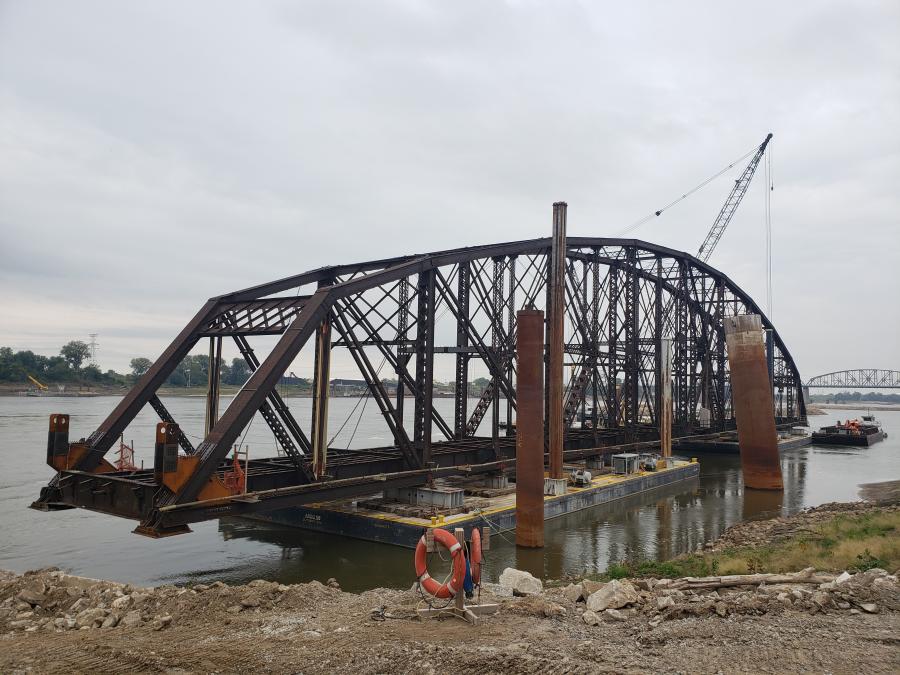 Owned by Terminal Railroad Association of St. Louis (TRRA), the Merchants Bridge required reconstruction due to the speed, clearance and load restrictions. The project includes the removal and replacement of the three river-span trusses; seismically retrofitting the existing river piers; and improving the east approach.

Work began in 2018 and, when completed in early 2023, the new double-track bridge will provide reliable, resilient and expanded freight and passenger rail capacity, helping move freight faster, cost-effectively and more reliably, providing an alternative to more congested rail regions like Chicago. With a doubling of the capacity of the bridge, the project will allow for an expanded service to assist in meeting projected future freight and passenger rail demand, reduce grade delays for motorists and emergency vehicles and ensure reliable rail connections across the Mississippi River into the next century.

"The Class I railroads relying on the Merchants Bridge serve the St. Louis region's manufacturing and logistics companies that are part of an interdependent supply chain requiring access to markets on both sides of the Mississippi River, across the United States, and internationally," said Ron Tindall, president of TRRA. "Implementation of this project will allow those companies — and others moving freight from coast to coast through our region — to move that freight faster, more cost-effectively and more reliably. Just as important, TRRA estimates our impact in the region will almost double, as we generate more than $456 million in local economic activity over a 20-year period."

A design-bid-build project, reconstruction of the bridge uses innovative project delivery methods that will improve safety and speed completion while limiting bridge and river traffic outages. New spans are being constructed in Wisconsin and shipped to St. Louis for final assembly on the Missouri bank of the Mississippi River and each will be floated into place immediately after the old spans are floated out. Removal and installation of the three new trusses will require three separate 10-day rail outages and three separate river channel outages.

The first of these outages began on Sept. 13 in preparation for the first truss to be moved into position and floated into place on Sept. 17, a milestone that was witnessed by approximately 200 invited guests and members of the media aboard a Riverboat Cruise hosted by the St. Louis Regional Freightway. The other two trusses will be installed in the winter and summer of 2022.

The replacement of this vital rail artery has been identified each year since 2016 as the region's top freight infrastructure priority by the St. Louis Regional Freightway, which is nationally recognized for its innovative and collaborative approach to creating a Priority Projects List that identifies key infrastructure projects and advocates for funding for them. 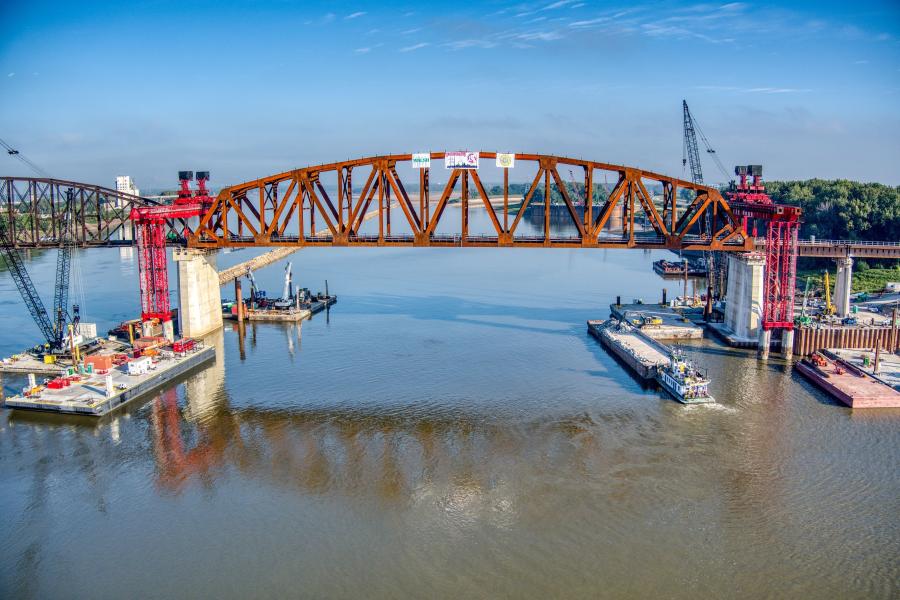 In winter 2020, the Federal Railroad Administration (FRA) awarded TRRA a $22.45 million Consolidated Rail Infrastructure and Safety Improvements (CRISI) grant toward replacement of the Merchants Bridge. TRRA is providing 90 percent of the construction costs, making this project a model for public-private partnerships.

"Our freight development committee continues to work with our many public and private partners to understand the needs of our manufacturing and logistics industries so we can speak with one voice to ensure all necessary parties are familiar with the region's infrastructure priorities, understand why they are priorities and can advocate for funding for them," said Mary Lamie, executive vice president of Multi Modal Enterprises, Bi-State Development. "It is extremely rewarding to see the progress on the region's top priority project and several of the others on our list. It affirms that we are on the right path with our approach and that our region's freight network will be stronger as a result."

Walsh Construction is the general contractor of the nationally significant Merchants Bridge project, with TranSystems and Burns & McDonnell serving as the project engineers. The steel fabrication is being done by Veritas Steel in Eau Claire, Wis. CEG