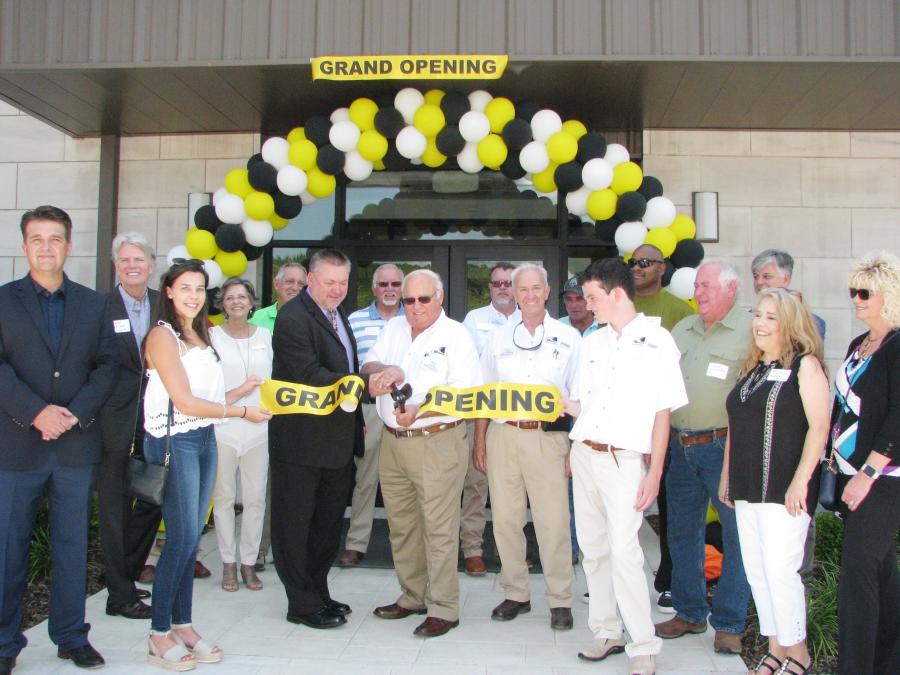 Wielding the big scissors and performing the ceremonial cutting of the ribbon was the mayor of Graysville, Ala., Julio Davis, and Gene Taylor, owner of Warrior Tractor, flanked by dignitaries and key staff members of Warrior Tractor.

Warrior Tractor & Equipment Company celebrated the grand opening of its new Graysville, Ala., branch facility on Aug. 1. A huge crowd of approximately 600 turned out to witness the ceremonial ribbon cutting and enjoy a terrific catered lunch while checking out manufacturer displays of machines and technology. Guests also had an opportunity to tour the new facility with enough time to spare to have a bit of fun and fellowship with their Warrior Tractor representatives. The new branch is located just off Exit 87 on I-22 with interstate frontage.

During the grand opening presentations, David Pearson, Warrior Tractor's general manager of Birmingham operations stated, "The success of this new endeavor stems from the leadership of Gene and Glennette Taylor. We all do our best every day and we are extremely proud of having a seventh facility in the state of Alabama and a second Birmingham area branch." Pearson also went on to say that a brand-new facility (just like the new Graysville branch) will be open within a year in the Huntsville, Ala., area.

"I want to thank Gene and Glennette [Taylor] for their investment in John Deere and in the community," said Kelly Granatier, John Deere U.S. and Canadian director of sales. "But most importantly, I want to thank them for the investment in our customers." Granatier further stated how he was so incredibly impressed with the tenure of the staff. For some being on the Warrior Tractor staff for 30 to 40 years is a true sign of people who want to be a part of this success story.

Julio Davis, the mayor of Graysville, Ala., also spoke briefly and expressed his gratitude to Gene Taylor for building this Warrior Tractor outpost in his city.

Warrior Tractor owners Gene and Glennette Taylor both took the opportunity to speak to their customers and friends and the overall consensus of both was an unwavering appreciation for their employees and valued customers whose combined dedication and trust in the organization has made it what it is today. They thanked Dunn Builders, and all of the subcontractors who built the facility along with Mayor Davis, the county commissioners and everyone who made this location a reality.

The quote of the day came during the speech by Gene Taylor who said, "I have a lot of partners that I work with, but my greatest partner is my wife, Glennette. She's one that can tell me what to do. If she's not around to tell me what to do, John Deere is there to tell me exactly what to do. So, I don't have any problems. I just gotta pay attention to what they tell me to do. It makes life easy!"

Some amazing prize drawings were presented throughout the day with the grand prize of a John Deere Deluxe gun safe being won by Hank Donald of Rast Construction, Birmingham, Ala., and a John Deere riding mower being won by Jason Guthrie of Jefferson County. Virtually all of the manufacturers that Warrior Tractor & Equipment represents were on hand to help out with the event and show their newest product offerings. 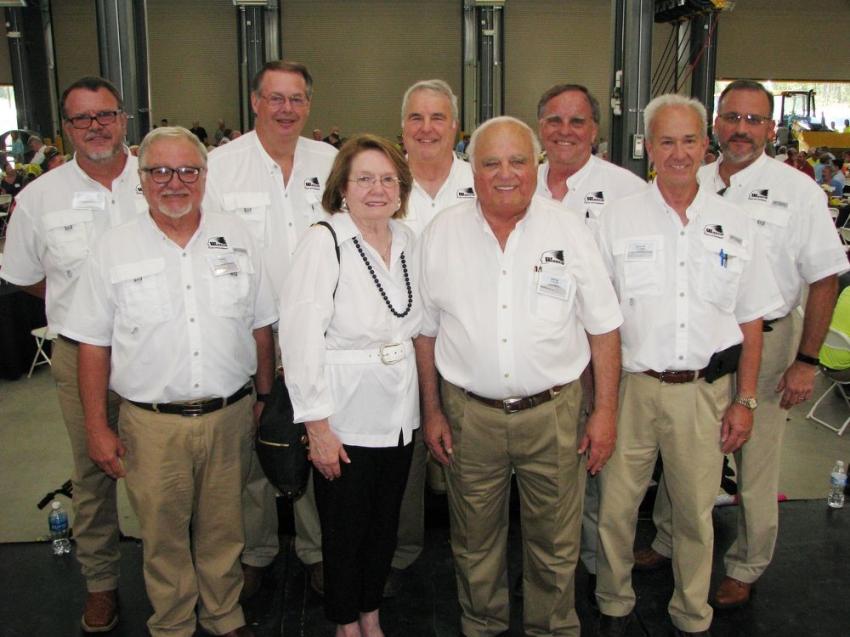 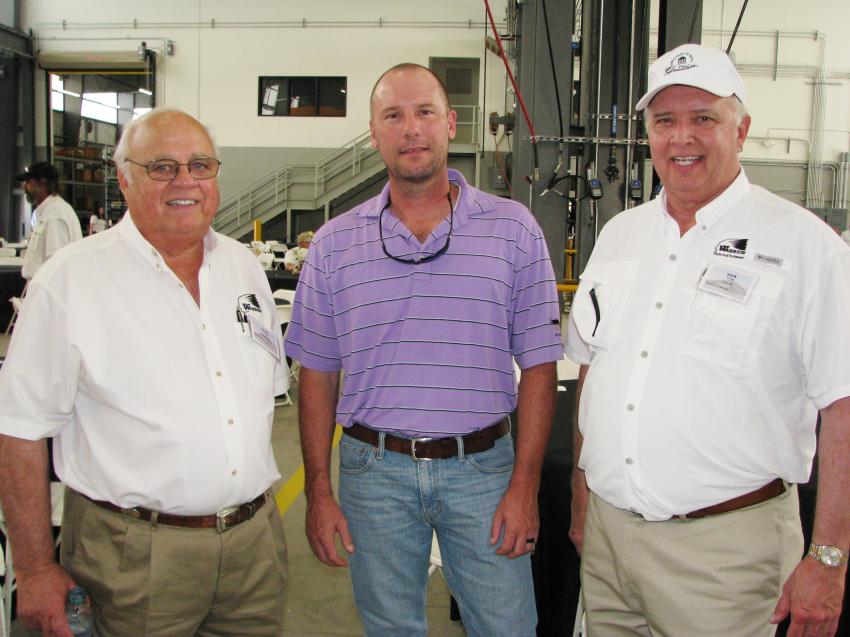 Gene Taylor (L) and Tom Tate (R) of Warrior Tractor give a warm welcome to the event to their friend and customer Ben Steltenpohl, vice president of operations — Alabama of Vulcan Materials. 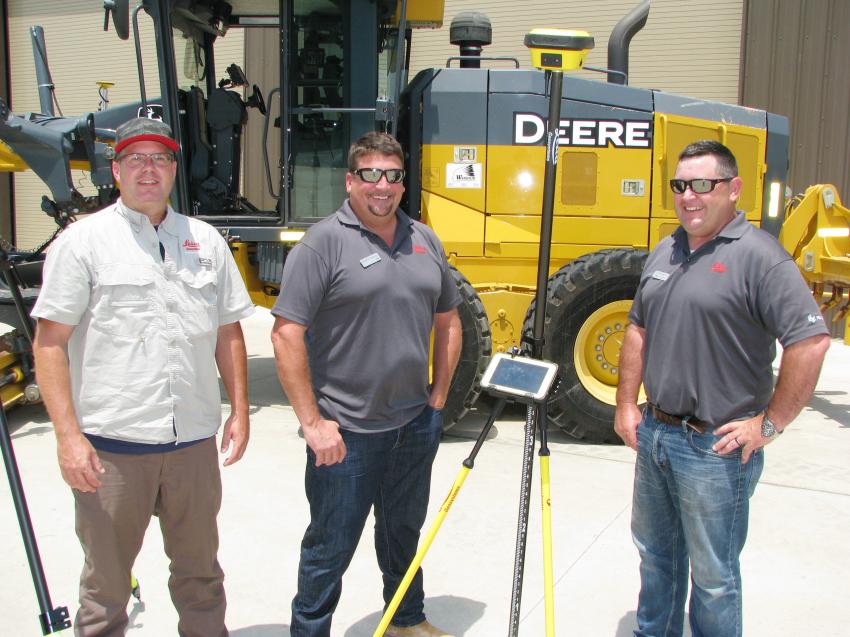 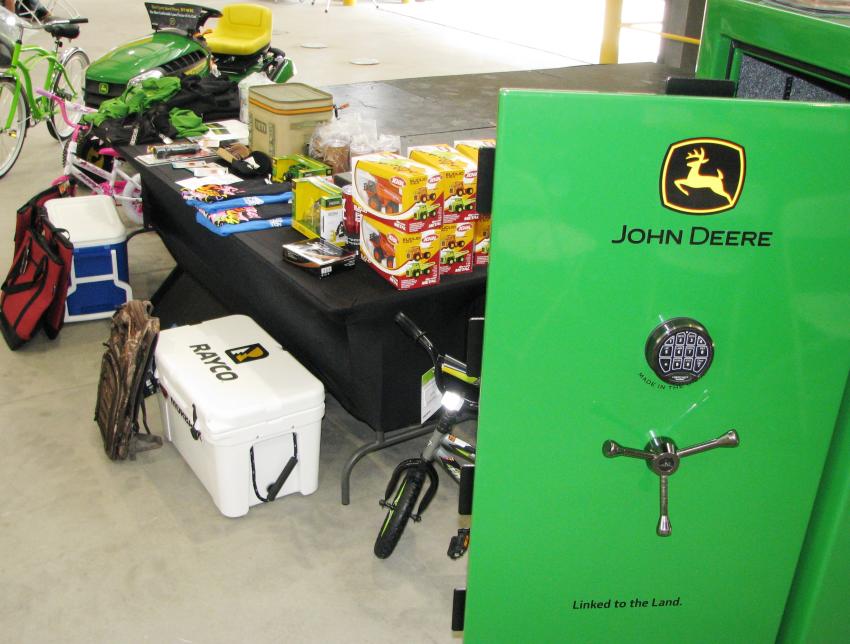 An absolutely amazing collection of prizes available at this event with two grand prizes of a John Deere Deluxe 23 series gun safe and a John Deere riding mower. 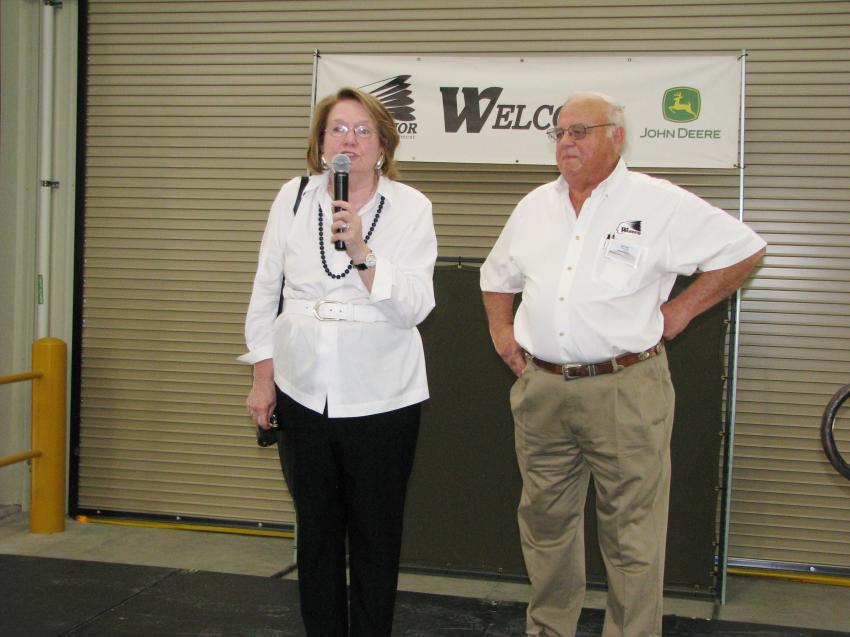 Glennette and Gene Taylor were extremely excited to address their friends and dignitaries at the event and to express their sincere thanks for their customers’ trust and continued business. 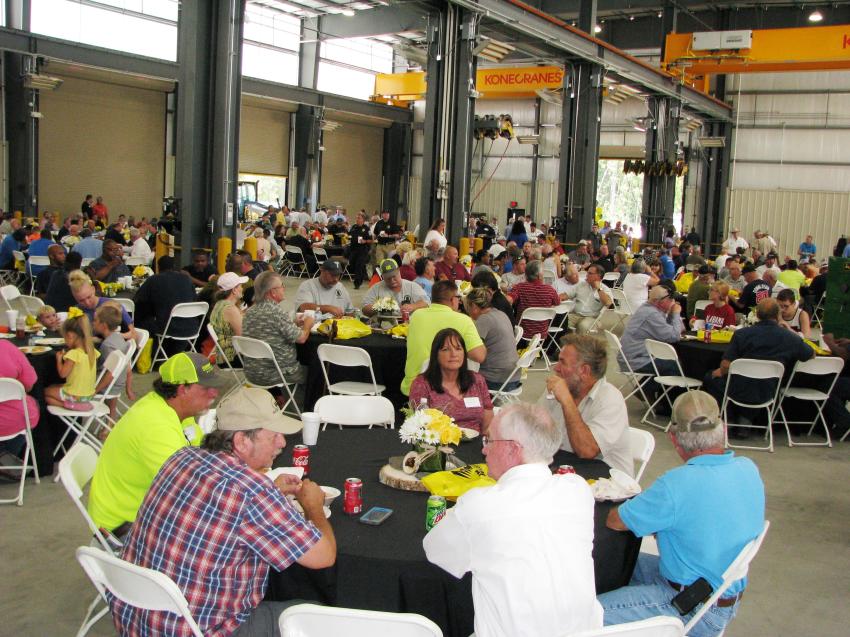 The shop area was jam-packed with approximately 600 guests enjoying a catered lunch and lots of fun in commemorating the grand opening of the newest Warrior Tractor branch. 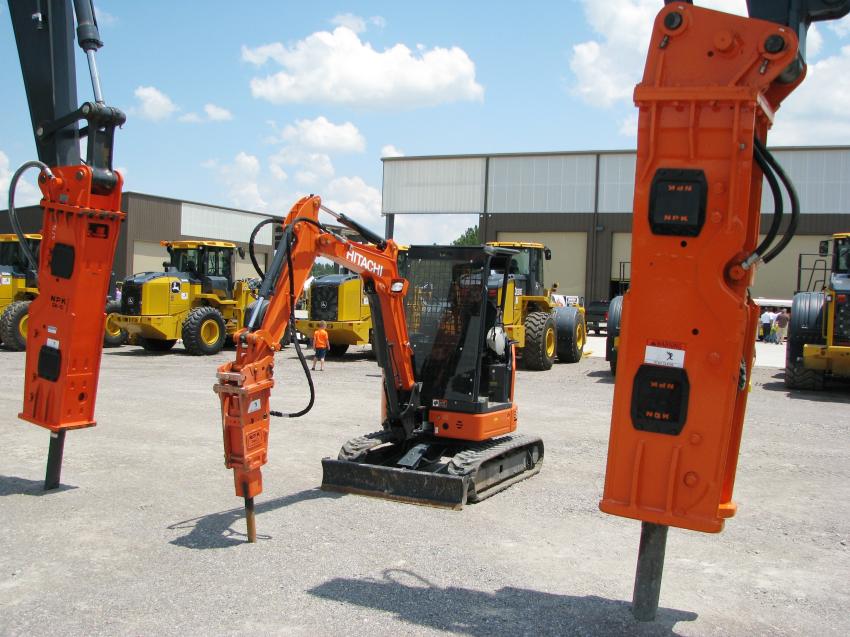 A display of John Deere and Hitachi carrier machines with NPK hammers, in both full-sized and mini machine configurations. 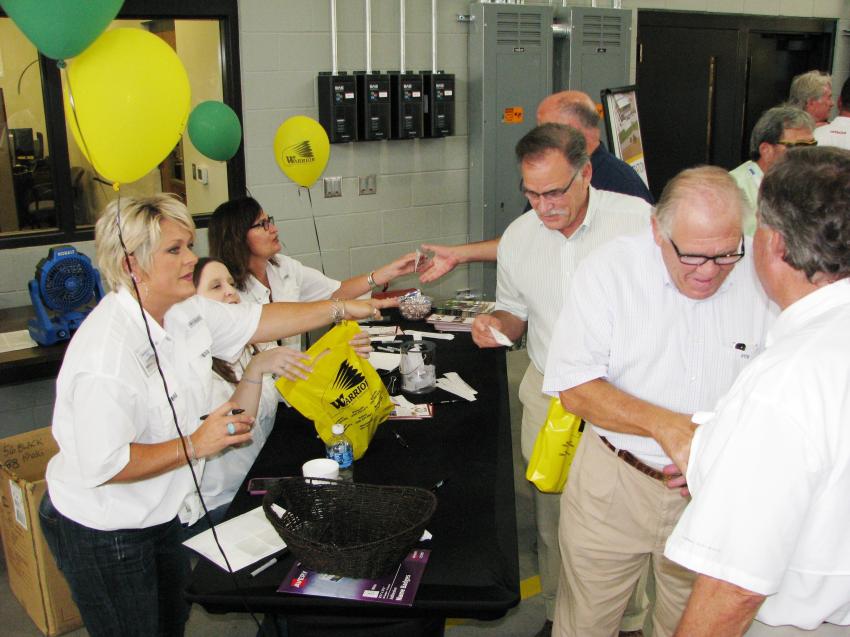 The ladies of Warrior Tractor were extremely hard at work providing name tags, registering guests for prizes and handing out some terrific “goody bags.” 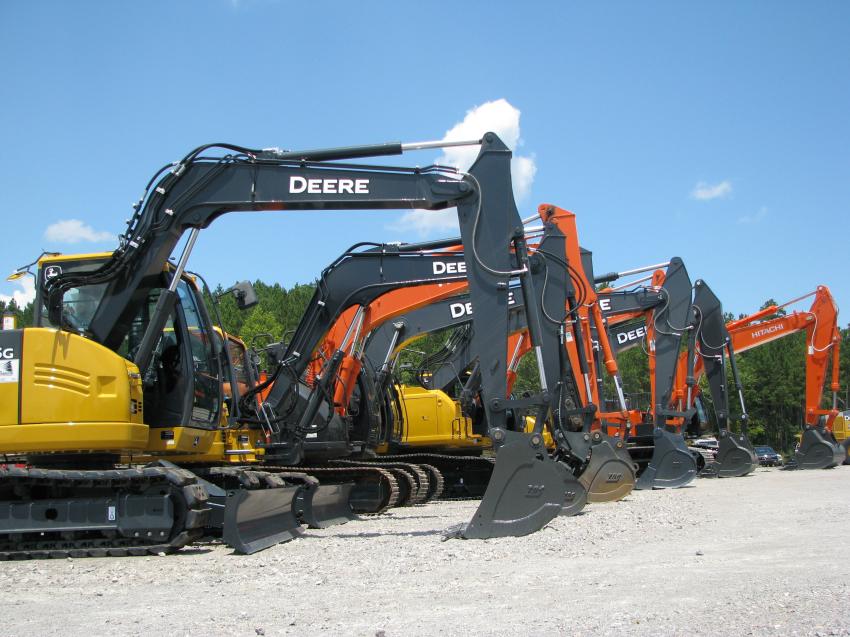 A huge selection of new John Deere and Hitachi excavators of all sizes were on the yard for all to see or demo during the grand opening. 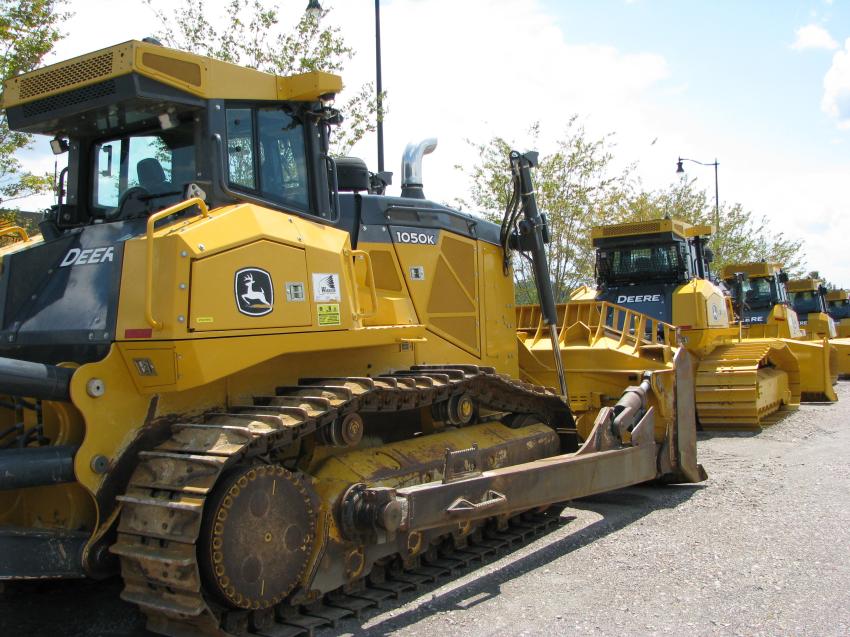 John Deere dozers lined the parking lot during the event. 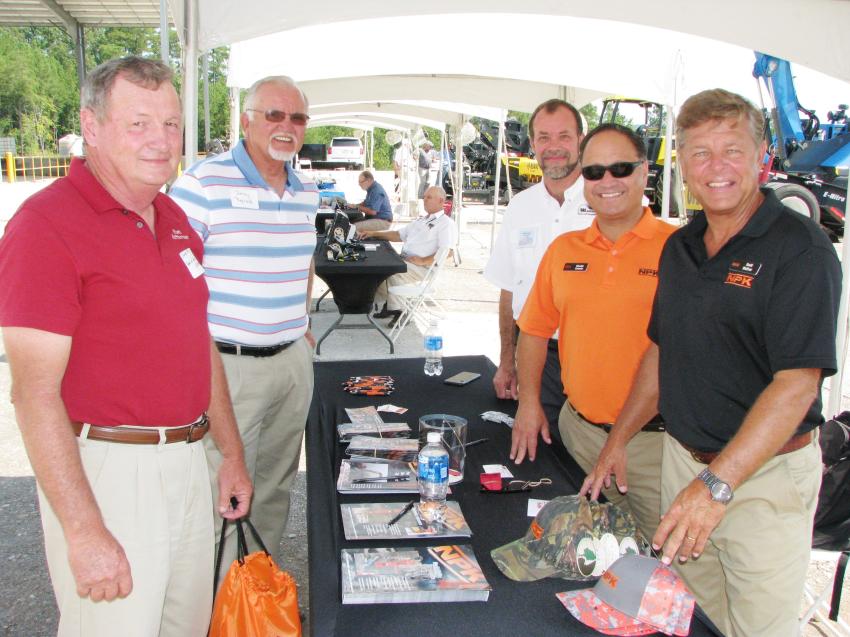 (L-R): In the vendor area at the NPK exhibit Charles Nix of the town of West Jefferson, Ala., and Johnny Ragland of the city of Warrior, Ala., stop to talk with Michael Hastings of Warrior Tractor and NPK’s Claudio Calzado and Scott McEver. 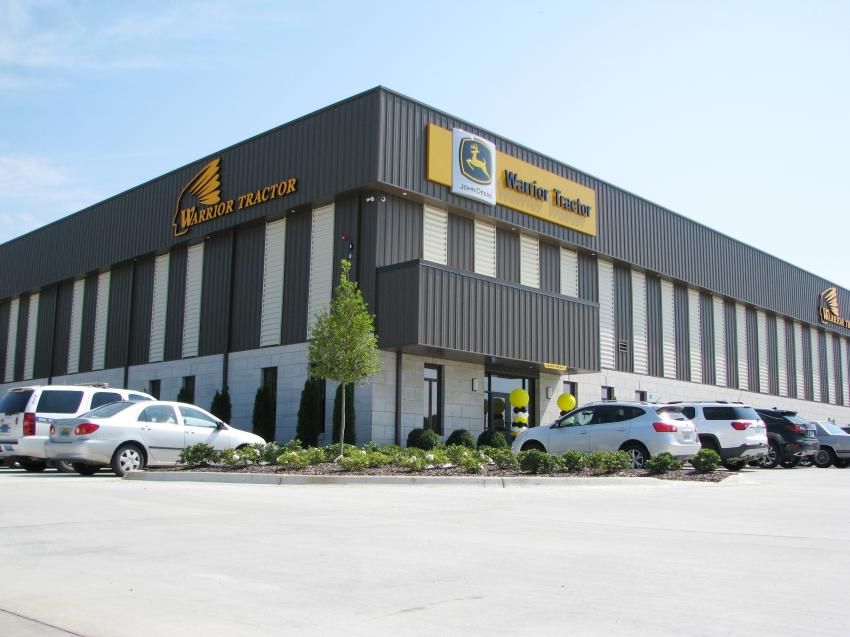 This newest Warrior Tractor branch is located just off Interstate 22 Exit 87 with a prominent view from I-22 in Graysville, Ala. 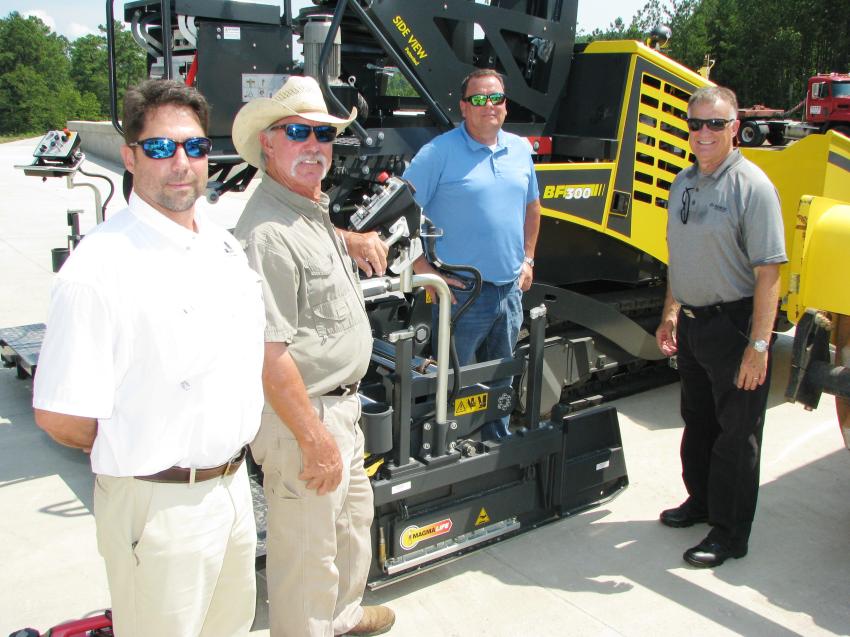 (L-R): Warrior Tractor’s Mike Sims; Tommy Self of Sundog Paving, Sayre, Ala.; Henry Polk and Jerry Fitch of Bomag, Ridgeway, S.C., talk about the products on display in the Bomag exhibit area, including the all-new BF 300 paver introduced earlier this year. 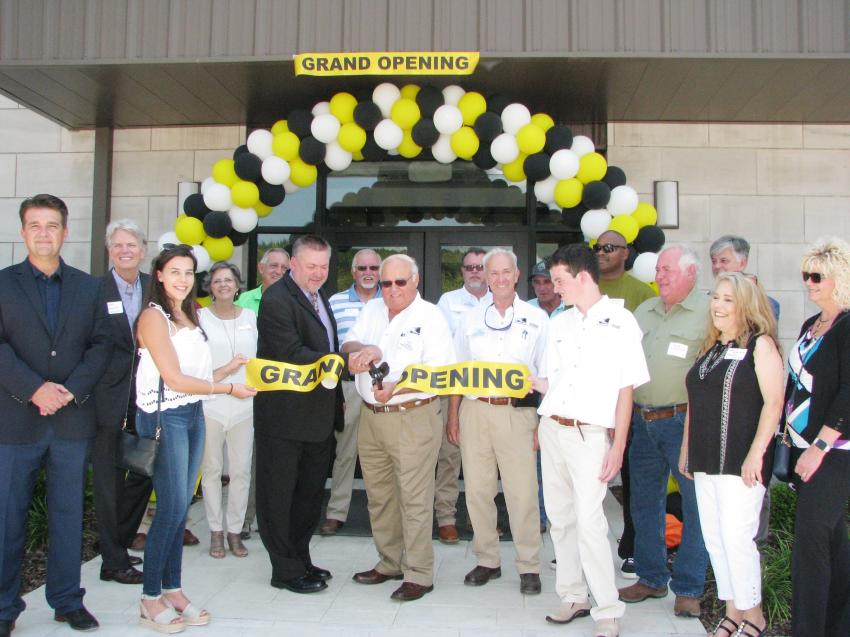 Wielding the big scissors and performing the ceremonial cutting of the ribbon was the mayor of Graysville, Ala., Julio Davis, and Gene Taylor, owner of Warrior Tractor, flanked by dignitaries and key staff members of Warrior Tractor. 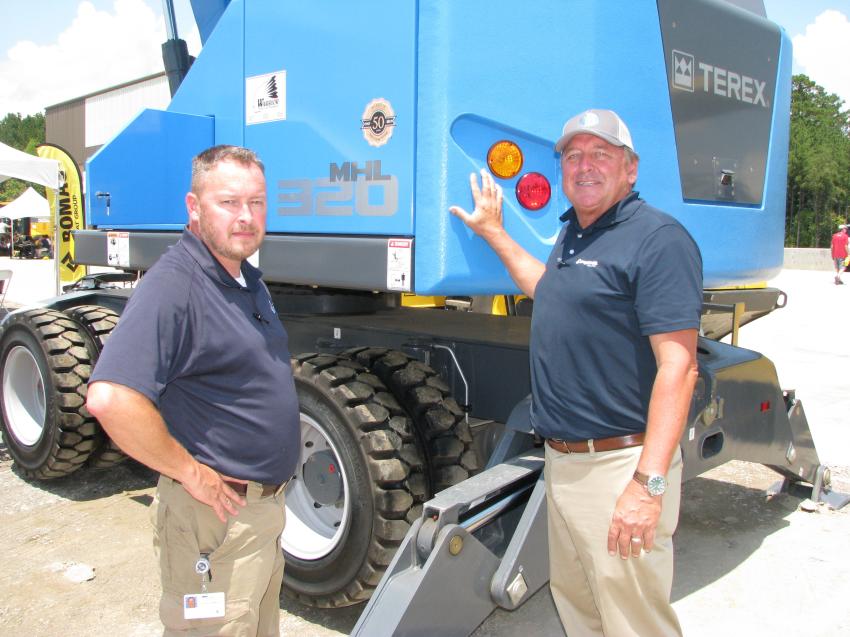 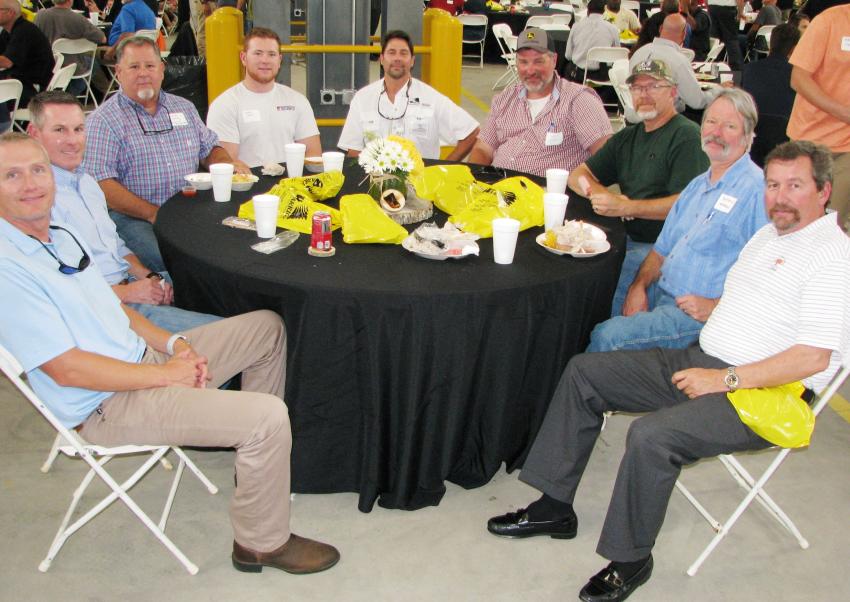 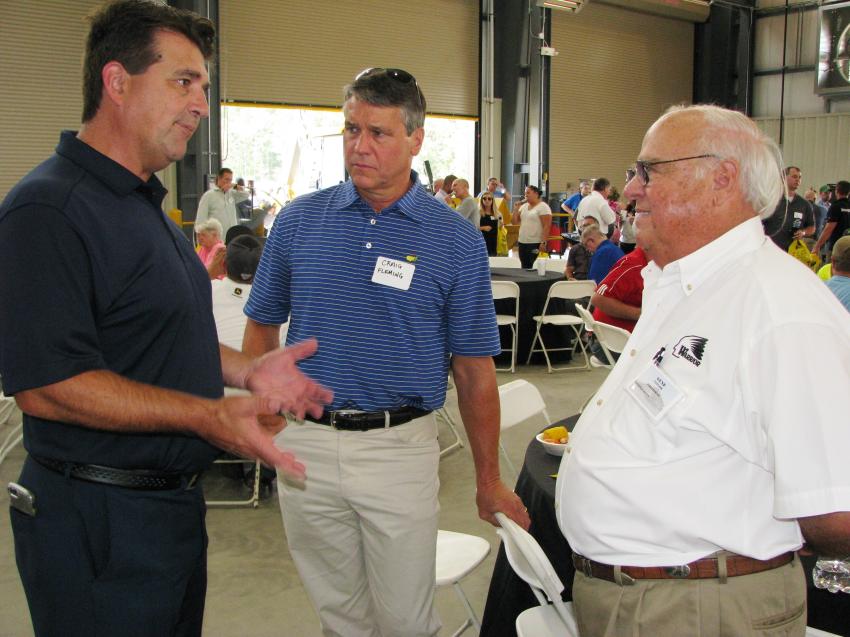 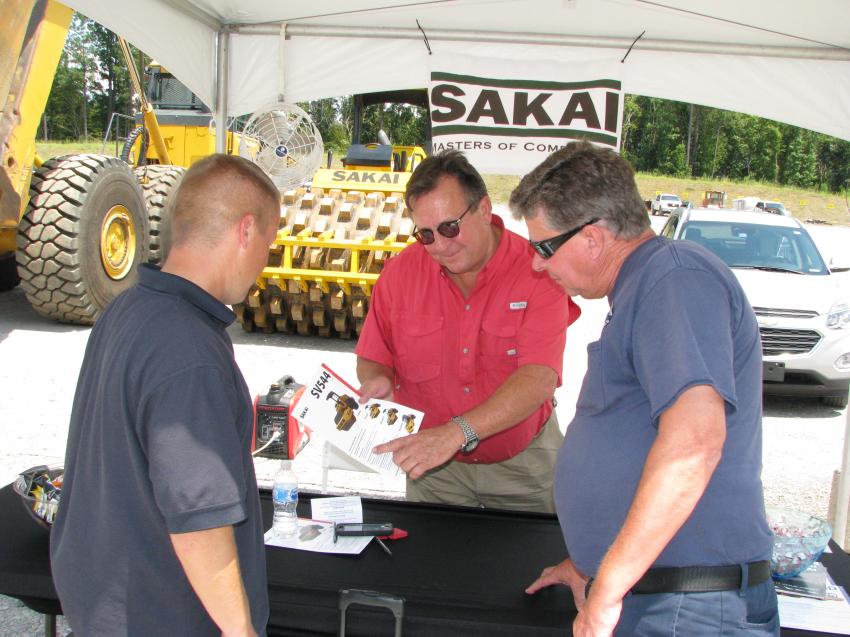 Daniel Wallace (L) of the City of Gardendale, Ala., Public Works Division and Rollie Tolbert (R) City of Centerpointe, Ala., Public Works have an in-depth conversation with Sakai America district manager John Wells about the Sakai products available at Warrior Tractor.