Warriors Bring out the Gold Shovels as Arena Construction Starts 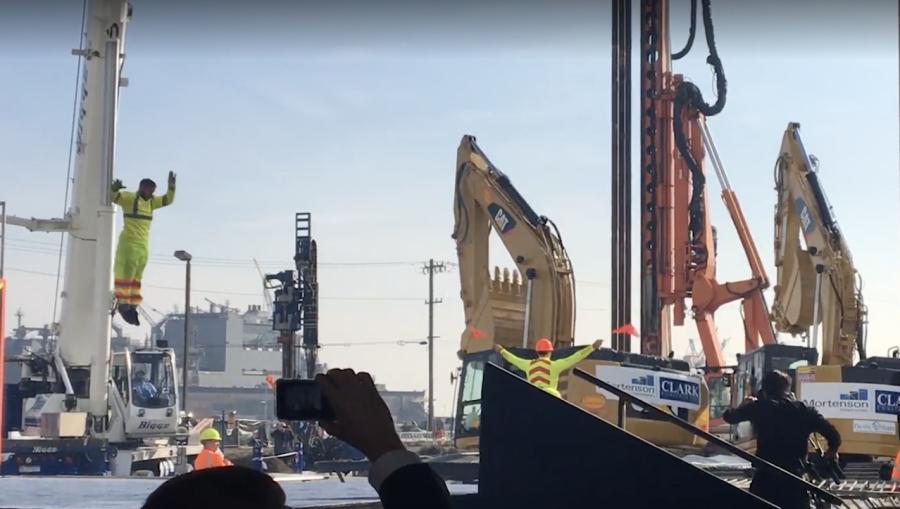 Dancers bust a move as a synchronized performance is put on by 3 excavators.

With acrobats dressed as construction workers swinging from excavators and fireworks in the background, the Golden State Warriors welcomed 1,000 of their closest friends to the site of their new arena in Mission Bay on Tuesday for a ceremonial groundbreaking that resembled Cirque du Soleil more than it did a construction job.

But while the shovels were gold-plated and the rich loam looked as though it came from Sloat Garden Center rather than beneath the old Southern Pacific rail yard, one thing about the groundbreaking was very real: After more than five years of planning, the construction of the $1 billion Chase Center has begun — and Mission Bay has taken another step to becoming a full-blown neighborhood.

“The place you are sitting right now is going to be transformed into the Warriors' practice court,” Warriors President Rick Welts said. “Two hundred feet behind me is center court. Closer than that is where Beyoncé will take the stage. The future president of the United States is going to get nominated right here. Family shows, conventions, graduations — a lot of memories will be made here.”

The groundbreaking, attended by Warriors All-Star forward Kevin Durant and head coach Steve Kerr, comes after the Warriors persevered through lawsuits, both real and threatened, and a contentious process that took the project from its original site at Piers 30-32 to a piece of land in the emerging Mission Bay neighborhood.

The 18,000-seat Chase Center will anchor a district of 11 acres that will add something that Mission Bay south of Mission Creek has been lacking: street life. Pedestrian traffic is now mostly residents, workers and patients at the UCSF hospital.

But just as the Giants' AT&T Park drew street traffic to the portion of Mission Bay north of the creek, the arena's basketball games, concerts and other events should attract plenty of people, with money to spend, onto the new sidewalks and into new cafes and bars. The Chase Center itself will have 100,000 square feet of retail, cafes and restaurants, and a new 5½-acre public waterfront park will spread out in front of the arena.

Mayor Ed Lee and and others at the groundbreaking emphasized that the arena is being built on private property without a public subsidy — a rarity in professional sports.

“This is no small feat,” Lee said. “Typically, the taxpayers are asked to pay for or subsidize professional sports facilities, or at least provide public land, but the Warriors are paying for this venue on land they purchased themselves.”

Chase Center is being built on a vacant lot that has been slated for development since 1998. The team agreed to buy the property at Third and 16th streets in Mission Bay in 2014 and has spent two years participating in the public planning process.

After breezing through the local approvals process, including a unanimous vote by the San Francisco Board of Supervisors, the project was held up in court for more than a year by the Mission Bay Alliance, a group of biotech executives and former UCSF board members who argued that traffic from the venue would snarl traffic around the university's hospital. Ultimately, both the California Superior Court and the California State Court of Appeal upheld the project, allowing construction to start this month.

Even as the organizers were preparing for the celebration Tuesday, word came that the California Supreme Court had rejected the final legal challenge to the arena.

“We are totally good to go,” Warriors majority owner Joe Lacob said. “It's not surreal anymore. It's real.”

Tuesday's event included performances by the Glide Memorial Church choir and members of the San Francisco Symphony. The master of ceremonies was Kevin Frazier of TV's “Entertainment Tonight.” The most dramatic moment was when a giant screen displaying a rendering of the arena lifted to reveal three yellow excavators doing a choreographed dance in the background. From the excavators unfurled bungee cords from which the acrobats swung, catapulting themselves into the air and bouncing on a series of trampolines positioned between the stage and the construction equipment.

It was then that the soft-spoken Durant addressed the gathering: “It would be fun playing there,” he said.

Some critics have taken the team to task for abandoning its loyal East Bay fans in favor of the richer and more high-profile city across the bay, but supporters of the move from Oracle Arena in Oakland characterize it as more of a homecoming. The Warriors played in San Francisco from 1962 to 1971.

The team is a charter member of the National Basketball Association, founded in 1946 in Philadelphia. It played there for 16 years before moving to the West Coast in 1962 to become the San Francisco Warriors and, ultimately in 1971, the Golden State Warriors when the team moved to Oakland.

While the 2019 arena opening in Mission Bay is two years beyond the original intended date and the costs have doubled from original projections, Warriors co-owner Peter Guber said it's been worth it.

“Did you ever hear anybody say, 'Let's go down to the Metreon theater, there's a film there that came in on budget?' No!” said Guber, a Hollywood producer and executive. “We never downgraded our dreams to fit our adversaries' narrative. No, we doubled down on the commitment to see it through.”