Contractors encountered a host of challenges on the project. 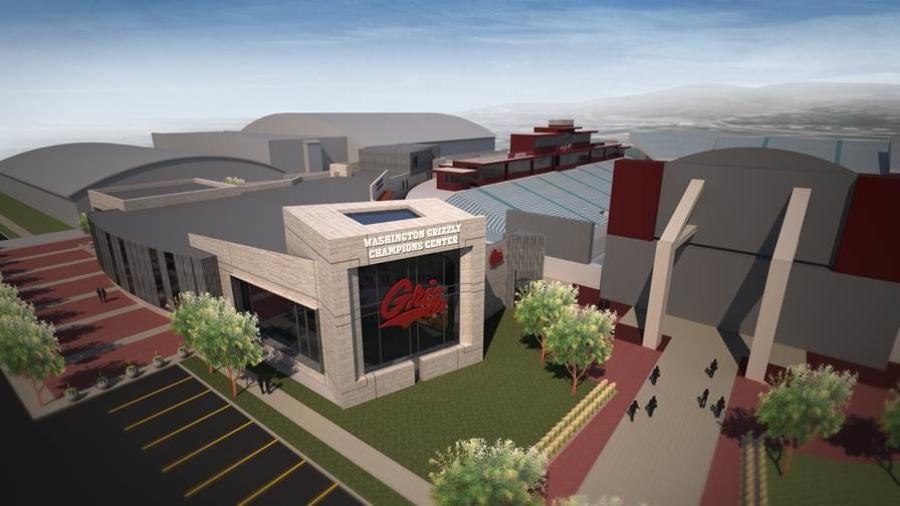 The new $14 million Washington-Grizzly Champions Center will offer new locker rooms for the football team and a state-of-the-art strength and conditioning center to be used by all athletes.

Next year at this time, athletes at the University of Montana should have plenty to celebrate — the completion of the new $14 million Washington-Grizzly Champions Center. It's a 46,000-sq.-ft. (4,273.5 sq m) project offering new locker rooms for the football team, a state-of-the-art strength and conditioning center to be used by all athletes and expansive meeting spaces.

And it comes not a moment too soon.

“Originally in 1983, we started construction on the present stadium in its location,” said Kevin Krebsbach, UM director of facilities. “As part of that construction we had locker rooms and showers under the stadium. Waterproofing was quite the task. We didn't ever quite get it right. There was no daylight. It was the worst conditions, a walking plaza and roof overhead, so you can imagine the task of keeping snow from leaking down beneath. It was a challenge for all the recruiting we were doing.”

The university did manage to put in membrane roofing that kept the water out, but it was still less than ideal. University boosters urged the school to move forward with a replacement and with a donation of $7 million from the Washington family, the university was finally able to get serious about a replacement. But it wasn't without numerous challenges.

“The site they selected was one of the challenges,” said Krebsbach. “It's adjacent to the stadium and includes a recreation center and swimming pool. We wanted the players to be able to run from the facility to the field. We wanted close proximity. All the women's sports and Olympic sports, everyone uses that area. We wanted to have it so they didn't have to go outside. When they get all sweaty and want to walk outside and it is 15 degrees, it is a challenge. But also we wanted them to be able to access all the other facilities.”

The most obvious location was a parking lot. It was optimal for the center, but it was a tough choice since it was also the site of all the utilities.

“Every utility ran through that site,” he said. “Virtually all the utilities — steam, storm sewer, water, power.”

“One of the main sources of power to campus ran right through where the building was going to go,” Krebsbach said. “It was vintage 1982 and we were getting a little worried about conductors. So we took the opportunity to relocate the campus feed, our main electrical feed to campus, which was previously under the old stadium, which wasn't a good thing. We wanted to relocate that supply. We did that before we got started on construction this year.”

There also were some issues with the design. The center must meet LEED silver standards, which impose certain restrictions from the start. Originally, the plan was to work with precast concrete for structural members. But they soon realized they would not be able to fit the large crane necessary to set the concrete in the tight space between the facilities. Instead, they opted for a steel foundation with insulated precast concrete for the walls.

“Because of the crane swing, we wouldn't be able to get enough structural members in place. We would have had to build in place as you went up each level. It's not really efficient. The subcontractors would have had to come back multiple times. The locker room has to be durable so that is why we were looking at precast concrete or concrete masonry units for the durability.

You can imagine 100 football players walking down the halls. We still need a crane for the steel, but not the big one that would have been necessary for the concrete structural members.”

There also is the issue of building the center while keeping the stadium open and fully accessible.

“The center is shoehorned between the pool, event center and the stadium. The Champions Center runs along the concourse of the stadium and we have to leave that concourse in. It has to stay open for access to seating, etc. So engineers came up with a unique shoring.”

They also must work around other crews installing a new video board, and new turf, making it critical that all the contractors work closely.

To meet LEED requirements, all asphalt and concrete busted up from the old parking lot will be trucked to local partners who will recycle and reuse the material.

Trees from the lot were removed and chipped for mulch to be used on campus.

CTA Architects designed the center and the construction contract was awarded to Jackson Contractors Group, both Missoula-based firms. It will feature an abundance of glass and a manufactured-stone veneer, some of which was donated by a local booster.

“We're proud it,” said Krebsbach. “Everyone gets behind Grizzly football. There's a lot of excitement. It just energizes all the contractors knowing what they are building.”

As for the old facility, it will remain in place for visiting teams and some of the other needs that couldn't fit into the new structure.