Washout on U.S. Highway 1 in Maine from Floods, Beaver Dam, Could Soon Be Fixed 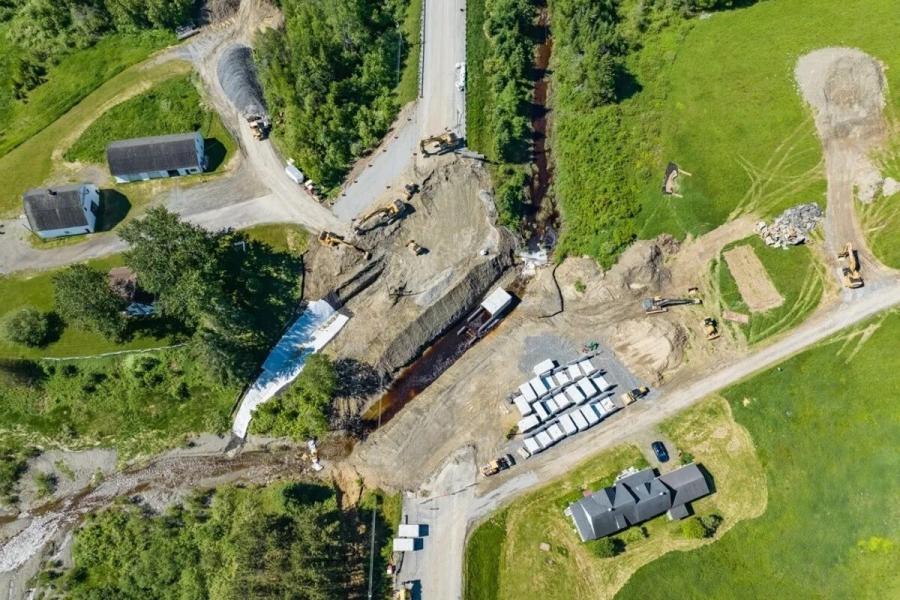 Maine Department of Transportation and Soderberg Construction work to repair a section of Route 1 in Cyr Plantation washed out when flash flooding caused a beaver dam to break loose in late May. (Photo courtesy of Aroostook Unmanned Aerial Services)

Supply chain difficulties and uncooperative weather have extended the repairs to a busy section of roadway in northern Aroostook County, Maine, that washed out in late May, a project spokesperson told the Bangor Daily Times.

Flash flooding from heavy rain and a beaver dam that broke loose during the storm caused a major washout that affected access to 22 miles of U.S. Highway 1, the key north-south road linking Caribou to Van Buren in the state's northeastern corner.

Brent Bubar, northern region engineer of Maine Department of Transportation (MaineDOT), explained that up to five inches of rainfall caused a beaver dam upstream of U.S. 1 in Cyr Plantation to break loose in flood waters. The dam washed downstream in the rapid water and plugged a culvert near Vaillancourt Hill Road and taking out a 7-ft.-diameter chunk of the highway.

In an interview with the Bangor newspaper in late May, James Sinko, a meteorologist and program hydrologist with the National Weather Service in Caribou, described the situation as a rare event, explaining that three rounds of heavy rain fell over that part of northern Aroostook County between Friday, May 28, and Saturday, May 29.

"One burst of heavy rainfall followed by another burst, by another burst just happened to go over the same areas there," he said. "The grounds were pretty soaked up prior to this, so all the ingredients came together for flash flooding."

Heavy rainfall and flooding damage also was reported on St. Mary's Brook Road in Van Buren, and along several roadways in New Sweden and Westmanland.

Sinko noted, though, that with the road washed out, U.S. 1 took the brunt of the extensive damage from the May storms.

Supply Chain Issues Prove to Be a Nuisance

"It's ugly," Bubar told the Daily News a few days after the disaster. "The existing pipe is damaged, otherwise we maybe could have filled back over it, but there is too much damage to do that. We're going to extraordinary measures to get something to work. We're fighting higher freight costs, and nobody has this stuff sitting around."

Just as he predicted, challenges with finding materials to fix the road did, in fact, dampen efforts to repair the damage in the few weeks after the flooding, the Bangor newspaper said in its latest report on June 20.

"No one had any in stock," he explained. "It would have been a month to get it made and delivered. We had to find something in stock that would satisfy Natural Resource Protection Act [NRPA] standards."

With no metal piping available, MaineDOT turned to another option: a 180-ft.-long concrete box with 12x14-ft. pening to fill the gap in the washed-out roadway. Bubar added that concrete's benefit is that it lasts longer than metal but takes longer to install.

"It will be around a long time — I expect more than 100 years," he said. "The beavers shouldn't be able to shut this box off anymore."

Caribou's Soderberg Construction came in with the lowest of three bids for the project, which was further delayed by rainy weather. Heavy thunderstorms and rain recently overwhelmed the construction site, and workers had to upgrade the bypass pipes and pumping apparatus, Bubar explained

"That took about four days," he added. "[MaineDOT has] put everything necessary into the project to get it done. It will take something very serious to stop it now."

He told the Bangor news source that the U.S. 1 repairs should be completed the week of June 27.

Until then, Bubar suggested drivers take alternate routes until the roadwork is finished.