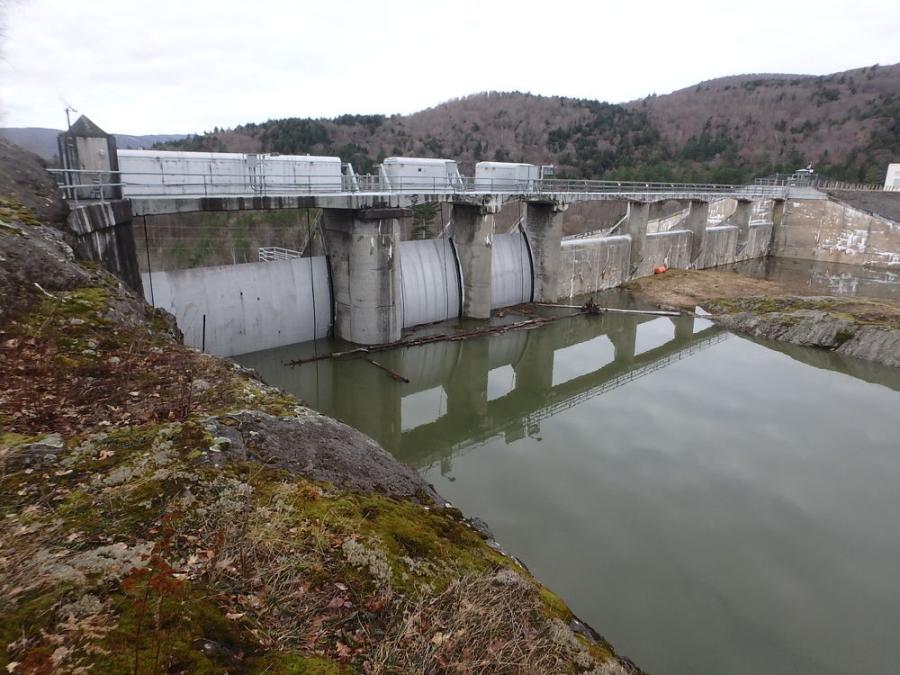 The Waterbury Dam, which was built in 1938 and repaired numerous times, most recently in 2007, needs additional work, which may be completed if it receives federal funding.

The Waterbury Dam, which was built in 1938 and repaired numerous times, most recently in 2007, needs additional work, which may be completed if it receives federal funding.

Sen. Patrick Leahy said money for repairs is included in a $20 million appropriation included in the Senate's Energy and Water Appropriations bill, which must be approved by the full Congress and signed by the president.

Benjamin Green, an engineer for Vermont's Dam Safety program, said a Risk Assessment must first be performed, followed by a Dam Safety Modification Report prior to final design and construction. 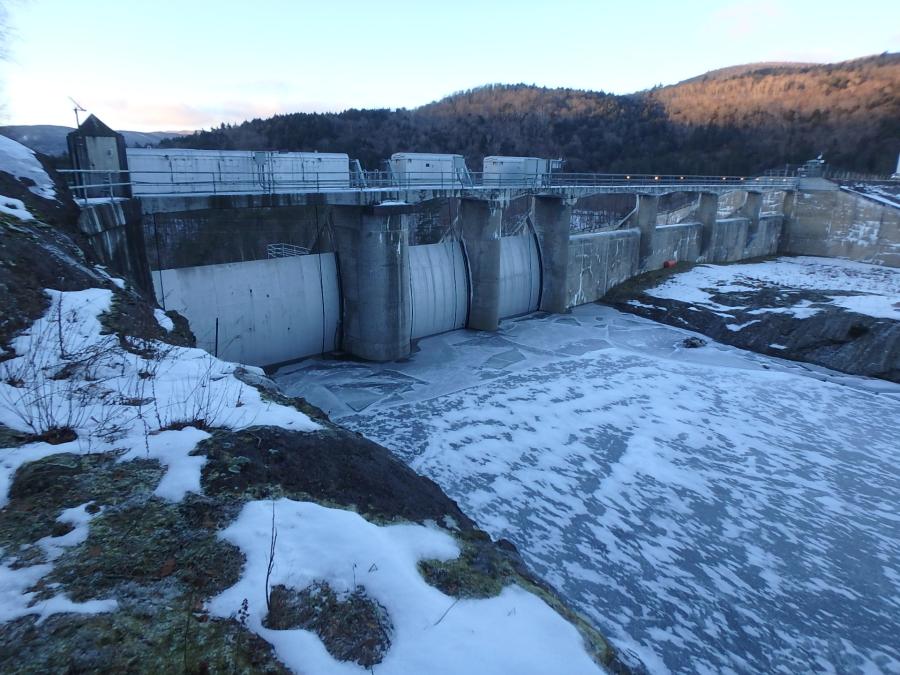 "The Risk Assessment, Modification Report and Design will likely take several years so it could be four to five years or more before construction begins," he said.

Green noted that the last significant repair of the dam was in the early 2000s and was related to seepage. A partial secant cut-off wall was installed but couldn't be completed due to technical issues.

"Six dewatering wells were also installed to pump leakage water out of the dam, he said. "During this project, and during regular test operations of the flood gates at the principal spillway, one of the gates jammed. This required temporary repairs to the gates and prompted a structural analysis of the gates, which deemed them unable to safely maintain a full flood pool. The objective of the upcoming spillway repair project is to permanently address the issues with the flood gates and spillway through repair or replacement."

The job will be completed through a partnership between the state of Vermont, the dam owner, and the Army Corps of Engineers, who originally designed and oversaw construction of the dam and continues to provide the state with technical and funding assistance.

"We would do the Risk Assessments and other items to evaluate what needs to be done," said Matthew Cosby, project manager of the Corps of Engineers. "We may do it in house and not contract it out, although we won't do the actual construction."

He said the Corps of Engineers is contracted by Congress to do construction and repairs of the Waterbury Bridge.

The Corps lowered the reservoir pool in 1981 and injected filler material in 1984 and reconstructed a portion of the toe of the dam and installed grouting in the gorge area to remediate seepage and settlement. 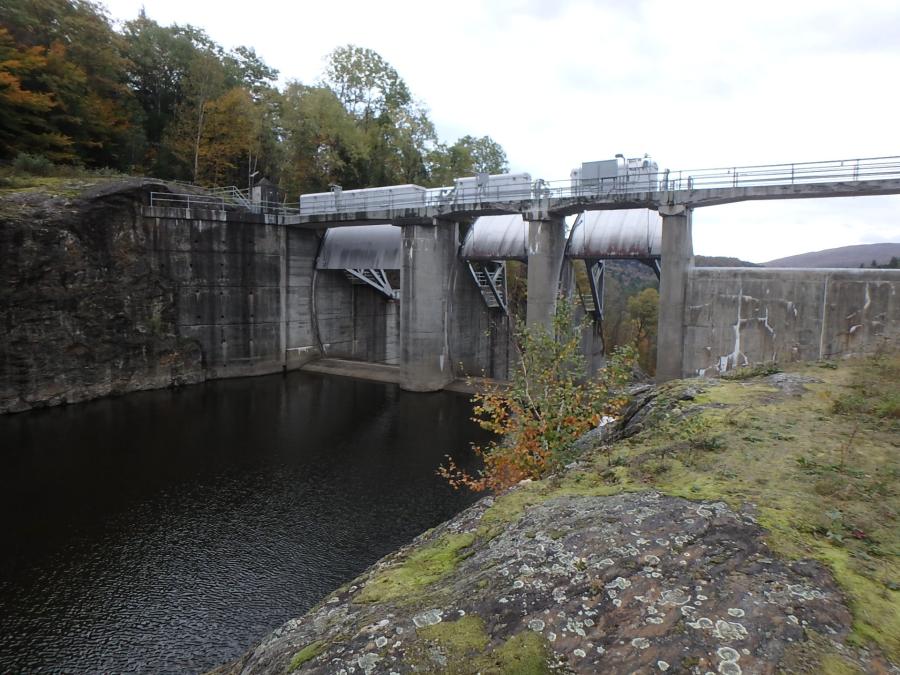 Vermont requested the Corps to conduct a dam safety assurance study to address conditions of the dam. The study was completed in 2000 and issued alternatives that included complete removal of the dam, constructing a new dam, reconstructing the gorge area or constructing a cutoff wall. The recommended plan called for constructing a filter shaft and monitoring structure in the gorge area to correct the seepage conditions. Construction was initiated in July 2002 and the installation of filters on the outlet conduit was completed in November 2002. Work in 2003 consisted of the initiation of construction of the secant cutoff wall and seepage control wells. Construction of the secant wall and dewatering system continued in 2004 through 2006. The Fiscal Year 2004 Appropriations Bill directed the Corps to design and construct a repair for the concrete spillway.

The spillway repair contract was awarded to Alltech Engineering in July 2005 at a cost of $693,000 and construction work was successfully completed in December 2005. The repairs were expected to extend the useful life of the spillway gates by 10 to 15 years. As part of this effort a Design Report was prepared in 2006 for a full replacement of the spillway at a future date. The operation of the gates is restricted in part due to structural deficiencies and the flood storage pool cannot be raised to the full height as intended. The mitigation contract was awarded to Fleet Environmental in August 2005 at a price of $621,000 and work was completed in November 2006. Additional work to repair areas of the slope was performed on the mitigation site in fall 2007 and completed.

The state of Vermont allowed the reservoir to refill in September 2006. The reservoir reached normal pool at the end of October 2006 and overall construction of the seepage control measures was substantially completed in January 2007 with punch list items completed in fall 2007 and formally turned over to the state of Vermont. An 18-month performance and monitoring period followed the reservoir refill and demonstrated that the seepage control features continued to operate satisfactorily. The completed project, including the operation and maintenance of the project, was turned over to the state in September 2010. 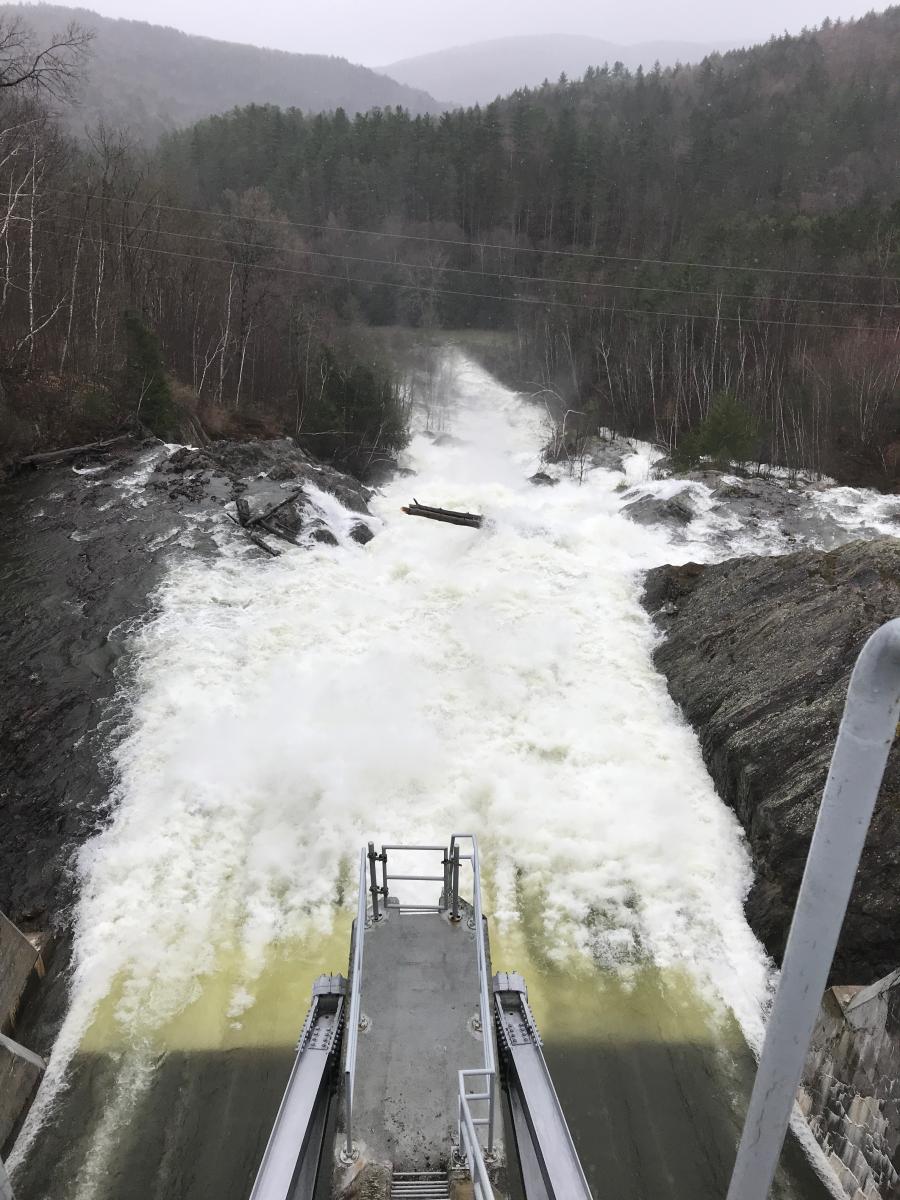 Waterbury Dam is located on the Little River 3 mi. upstream from its junction with the Winooski River in Waterbury. The dam consists of a rolled earth embankment approximately 1,850 ft. long at its crest, 187 ft. high at its maximum section above the original river channel, and approximately 1,000 ft. wide at the maximum section. The spillway section is 261 ft. long and consists of two components. The first is a 161-ft. wide ungated concrete section with a crest elevation of 617.5 ft.

The second section is 100-ft. wide, contains three tainter gates, and has a sill elevation of 592 ft. The gates are 26.5-ft. high. Two of the gates are 20-ft. wide and were part of the original dam construction. The third is 35-ft. wide and was added in 1958 as part of a modification of the dam to satisfy updated hydrologic and hydraulic requirements.

"The Waterbury Dam and Waterbury Reservoir draw people from around Vermont and the country to appreciate our Green Mountain state," said Leahy. "Tropical Storm Irene once again proved how crucial Waterbury Dam is to the safety and resilience of surrounding towns. I am glad the committee has supported my effort to once again provide the Army Corps of Engineers with the funds it needs to make much-needed repairs to this important piece of Vermont's infrastructure.

The $20 million in the Fiscal Year 2020 Energy and Water Appropriations bill will support four eligible dams, including Waterbury, that were built by the Army Corps of Engineers.

"The Senate will conference it with the House and after it's received it will be sent to the president to sign into law," Cosby said.

Green said, "We own the dam and get technical and funding assistance from the Corps of Engineers for design and construction work. The Senate funding would go to the Corps and we will pay a 35 to 50 percent share as part of a cost share agreement." CEG