­Waters College of Health Professions to Open in 2019 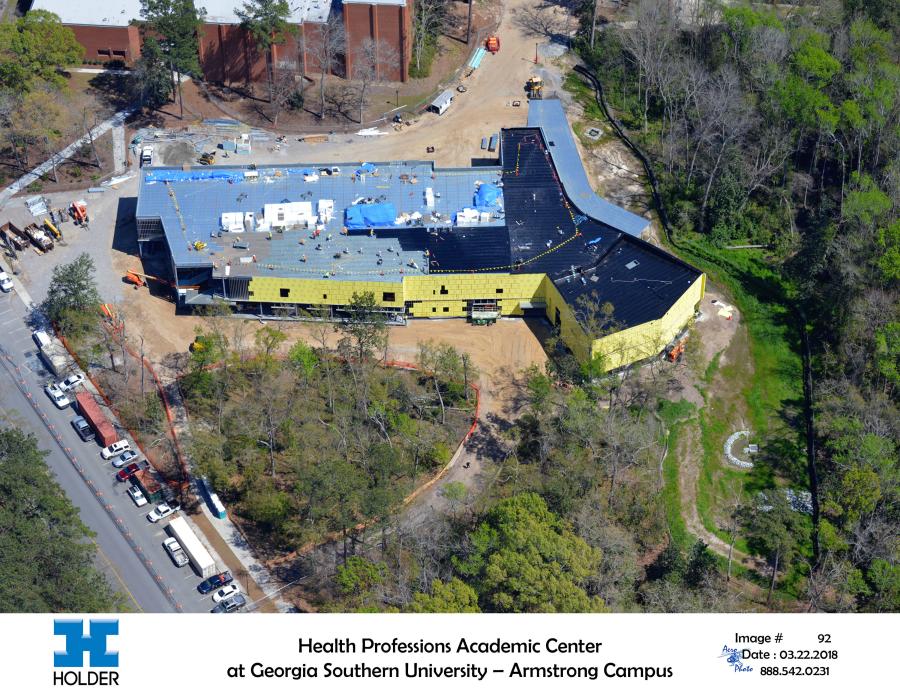 Georgia Southern University broke ground on August 29, 2017, for the new $22 million facility that will house the Waters College of Health Professions in Savannah.

Georgia Southern University broke ground on Aug. 29, 2017, for the new $22 million facility that will house the Waters College of Health Professions in Savannah. The S/L/A/M Collaborative designed the project and the project is being managed by the Holder Construction Company.

The new health professions facility is being funded primarily by the state, which approved the funding last May. The University's college for which a new building is under way is named after Don and Cindy Waters, Armstrong graduates, who donated $2 million toward the college.

The project consists of a new two story/63,000-sq. ft. health professions building and associated renovations of the 46,000 sq. ft. Ashmore Hall. The new health sciences building will house a Simulation Suite and provide hands-on team-oriented learning opportunities for students. A major goal is to simulate the environment of a hospital or medical facility.

The building is expected to be delivered in late 2018 and will open its doors to students for the spring semester.

Georgia Gov. Nathan Deal stressed how the investment will help to improve health care in the state.

A key aspect of Georgia Southern's efforts has been in medicine and it graduates more undergraduate health professionals compared to other universities in Georgia via a range of academic programs in nursing, public health, health administration and the allied health professions. The new facility is linked to Georgia Southern's mission to jump-start economic development in the coastal Georgia region by supporting collaborative efforts and technological advancements in a variety of fields of study.

Georgia Southern President Jaimie Hebert made it clear how the Waters College of Health Professions will make a difference.

“At Georgia Southern, we have students who have dreamed their whole lives of becoming nurses, physical therapists, speech therapists, respiratory therapists and medical technicians,” he said. “We are excited to support those students in making their career dreams come true.” 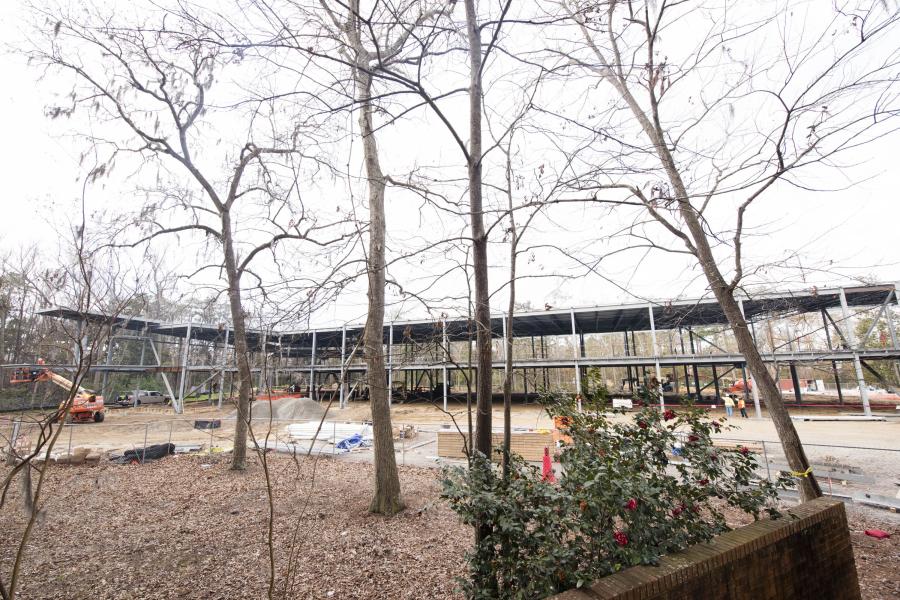 The S/L/A/M Collaborative developed a design that celebrates the interdisciplinary nature of the health professions. The design consolidates many program areas vital to the College of Health Professions such as public spaces and amenities; classrooms; teaching/learning labs; a simulation suite; faculty/administrative spaces; and building support spaces.

“The modern style of the new building addresses its unique 'crossroads' location on campus where connectivity to adjacent facilities is key,” said Mark Novak, AIA, Associate, The S/L/A/M Collaborative. “The form of the building shapes a future shared green space with potential expansion facilities to the west. A covered porch welcomes visitors from University Drive and Armstrong Center, and a transparent façade at the southern/wetlands side creates a strong interior/exterior connection.”

The project will incorporate the requirements of the Georgia Energy Efficiency & Sustainable Construction Act.

Holder Construction started the clearing and grading of the site last August, which was followed by the installation of the foundations and the structural steel. Soon afterwards crews starting putting on the structural studs and sheathing, along with the interior framing. The mechanical/electrical/plumbing in-wall rough-in (MEP) started in February.

“We recently started the roofing and the building is now temporarily dry,” said Bert van der Meer, Holder's project manager. “This will support the drywall installation of the building. For the Ashmore renovation, we started it in January because we had to wait for the school to vacate the building. The demolition work was done throughout January and then we immediately moved into interior framing and overhead MEP rough in.

“The remaining activities for the new building is to complete the envelope —which includes metal panels, precast concrete, glass, and brick, and then there are the interior finishes,” he said. “We are projected to finish in late November. For Ashmore we're projected to be finished toward the end of summer/beginning of fall. We want to finish the renovations so they can move in for September/October and then transition the move into the new building so that it is a seamless process for them.”

Two immediate challenges were the discovery of unsuitable soils and the impact of Hurricane Irma, as well as an unexpected snow in early January.

“We had some pretty severe weather,” said van der Meer. “We were able to make up for losing time by re-sequencing the project. Our original plan was to split the building in two — north and south, and we split it into three sections which allowed us to mobilize some of the trades earlier than anticipated. Once we got the structure up on the first section, we were able to start with the exterior sheathing sooner than planned. Crews put in some overtime hours on several Saturdays to make up for the weather delays.”

Planning for the schedules and benchmarks began early as Holder, S/L/A/M and Georgia Southern collaborated early on.

“We strategically planned early releases such as structure and glass to meet the start dates and support construction,” said van der Meer. “It's a tight work site and the university was able to push out our originally planned logistics to allow for contractor parking and staging. That was very helpful and appreciated. We were also able to mobilize construction trailers outside our fence-line that we negotiated with the university.”

Existing utilities are being avoided and Holder has a stringent process relating to the installation of new utilities and below ground construction.

“We do potholing, scanning, and we have a checklist series of protocols to make sure that we've identified all underground utilities in addition to those shown on drawings,” said van der Meer, “We've had some 2 a.m. and 3 a.m. concrete pours to support the concrete installation and make sure that we're pouring in proper temperatures.”

“Planning the logistics early on was very helpful,” said van der Meer, “communicating our plan to make sure that we have the university's buy-in on how we were setting up our construction fence-line and phasing. We carry that from project-to-project. This also includes coordinating invasive work whether it be outages or loud bothersome work and planning that around holidays and breaks so that we're not impacting student and faculty life.

“We also implemented building information modeling and other virtual design and construction practices,” he added. “That enhances communications with the design team and the owner to be more efficient in the field. Collaboration, teamwork and buy-in make a job successful.”

There are 25 subcontractors working on the project. Currently there are around 90 workers on site, which will peak to about 150 when the building envelope work goes into high gear.

The lead foremen meet every day at 6:45 a.m. to map out the daily benchmarks and every Tuesday subcontractor coordination meetings are held. Both meetings are led by Joe Jett, Holder's superintendent.

“The coordination meetings give focus on the three-week look ahead of our schedule and review any sort of obstacles that the team needs to overcome,” said van der Meer, “to make sure that we're moving forward in sync.”

Figures are still being determined for the amount of material that has been removed from the site and the materials being used for the construction.

“Material handling is well thought out and discussed at the meetings,” said van der Meer. “We've had very large deliveries from the onset of the job, which goes back to the planning with the university and making sure that we have a logistics plan that we can communicate with anybody.”

Much of the equipment being used is leased from local equipment dealerships via the subcontractors. The earthworks subcontractor owns its excavators and grading equipment and the steel subcontractor is using a Maxim crane for structural steel hoisting.

Equipment being employed includes dozers, excavators, forklifts, cranes, loaders, concrete pumping and pouring machinery, other standard vehicles, and telebelts for the installation of the sub-grade stone that was very helpful with the structure installation.

“We haven't had any major equipment issues that have slowed us down,” said van der Meer, “and nearly all maintenance issues are handled on site.”