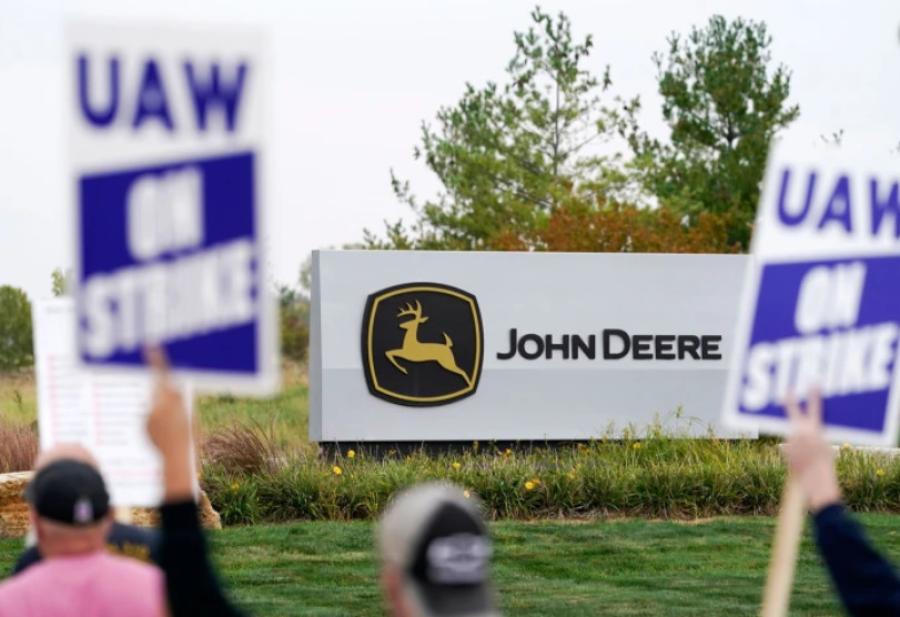 The new agreement will boost hourly wages by 10 percent and increase retirement benefits. In addition, the company will maintain its health insurance program, in which workers do not pay premiums, the Register reported.

The pact was approved by approximately 61 percent of UAW voters.

The 10,100 John Deere workers in Iowa, Illinois and Kansas had rejected two previous contracts, setting off the first strike against the company since 1986.

"UAW John Deere members did not just unite themselves," Ray Curry, president of UAW International, said in a statement. "They seemed to unite the nation in a struggle for fairness in the workplace. We could not be more proud."

In his own statement, Deere CEO John May said, "I'm pleased our highly skilled employees are back to work building and supporting the industry-leading products which make our customers more profitable and sustainable."

The contract approved Nov. 17 was much the same as an agreement that 55 percent of members voted down Nov. 2. After that vote, company officials said they would not offer any further wage or benefit increases.

The strike began as Deere celebrated the prospect of record profits, with executives projecting in August that the company would earn $5.7 billion-$5.9 billion for the fiscal year that ended Nov. 1 — a 62 percent bump over 2013 earnings, the company's previous record year.

In the first contract introduced in early October, Deere offered up to 6 percent pay increases and re-introduced quarterly cost-of-living adjustments, a feature of previous Deere-UAW contracts that the company eliminated in 2015. The equipment maker also offered workers $3,500 bonuses if they ratified the contract.

Additionally, the company proposed a boost to the pension program that would have given a 25-year employee about $100 extra each month in retirement and offered lump-sum payments of $20,000 to $50,000 for workers when they retire, depending on their length of service. At the same time, Deere proposed to eliminate the pension program for workers hired after Nov. 1.

After UAW members rejected that contract, Deere upped its offer by promising employees they would get 10 percent pay bumps and ratification bonuses of $8,500. The company also said it would preserve the pension program for future workers and boost payments to retiring employees, giving a 25-year worker about $250 extra every month. A second lump-sum payment also was added for those workers: $2,000 for each year at the company as of 2021.

Union leaders told Deere employees that the money is supposed to pay for health insurance until they qualify for Medicare.

The Des Moines Register noted that the third contract offer by Deere retained those terms, adding only the modified production incentives. With its approval, workers on the lowest end of the pay grade, like those in foundry support, will see an hourly wage increase to $22.13 from $20.12. The skilled trades positions at the top of the pay grade, like electricians, will see hourly boosts to $33.05 from $30.04.

UAW members told the Register that ratification meetings across Iowa were more subdued than those before the first two votes, when some employees admonished union leaders for failing to extract more concessions from the company.

Leadership at UAW Local 838 in Waterloo did not hold a ratification meeting. Instead, workers were assigned in alphabetic order to hour-long voting blocs throughout the day.

At the hall, members said, leaders met individually with any concerned voters to answer questions about the contract. Gone were the heated speeches against the union and the contract that were a hallmark of the first two ratification meeting, held in large, rented venues, the Des Moines newspaper noted.

Abe Elam, the sergeant-at-arms at Local 74 in Ottumwa, told workers that the contract was a step in the right direction. He said he did not believe the union could win greater wage increases or better benefits even if workers stayed out for months.

"This is it," he said. "We've pushed them to that line, and they're not going to give anything else."

Many UAW Members Unsure Prior to Vote

Outside of the Palace Theatre at Adventureland Park, where Des Moines Works employees voted Nov. 17, members were divided on whether to extend the strike.

Chuck Smith, a welder, declined to tell the Register which way he voted. But he told the Register that the company could afford to pay rank-and-file workers better, even though a Deere spokesperson said it had "economically exhausted" its offers.

Smith pointed out that even in 2015, a down year by Deere's standards, the company earned a profit of $1.9 billion.

But Bob Loney, a maintenance welder, warned that employees would regret a longer strike. He has been with the company since before October 1997, when the union and Deere agreed to cut benefits and wages for new hires. That means he is in line for a better retirement plan than most employees at Des Moines Works.

Dustin Garland, a machinist on the line that manufactures cotton pickers, voted for the contract because he was pleased that Deere preserved the health insurance program. Garland picked up a part-time job at Amazon's Bondurant fulfillment center during the strike, a job he said he does not like as much as his work at Deere.

Forklift driver Randy Oldham, meanwhile, said he approved the contract after pondering the misery of strike duty in December and January.