Well-Traveled Span Over I-35 Undergoes Replacement

There are plenty of challenges in the Iowa Department of Transportation’s project to replace the NE 54th Avenue bridge over I-35. 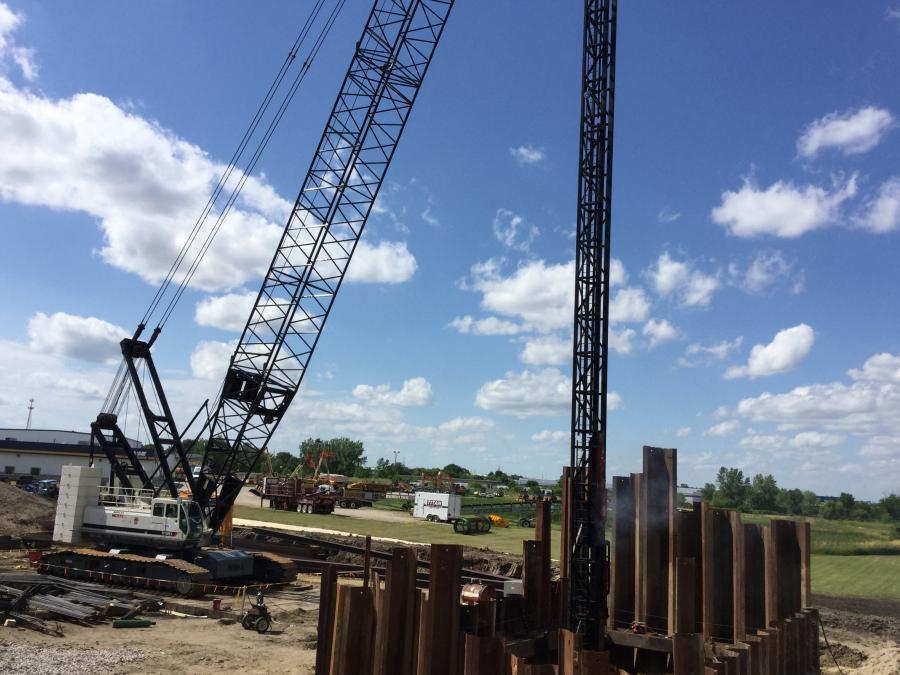 There are plenty of challenges in the Iowa Department of Transportation's project to replace the NE 54th Avenue bridge over I-35. It's a heavily traveled area with the interstate seeing 75,000 vehicles daily, and located just a half a mi. north of the NE Mixmaster in Des Moines, an interchange of I-35, I-235 and I-80.

“What this bridge does for the Mixmaster is allows ramps to flow outwards to make traffic more directional,” said David Evans, IDOT transportation engineer specialist. “In really peak hours, the traffic flow is really restricted. The bridge allows for more room. Because it is so long, both the first and third spans allow traffic to go underneath. Right now, we just have the existing bridge, 300 feet or less.”

But while managing a $7 million construction project over a high traffic interstate — with closures allowed only at night — has its potential headaches, no single challenge is quite as daunting as the size of the bridge components.

“You have five girder lines and three spans and six segments in each girder line,” said David Evans. “That's 30 segments total at 150-feet long per segment. The contractor is going to pick up 150-feet long steel girder segments to erect them. They are very slender and hard to control. The reason we are doing that length is the 150-foot segment allows us to span over I-35. The industry has said that length is the limit for transportation and fabrication for steel girders. That's quite enormous; kind of unheard of in Iowa.”

The state has suggested a girder erection plan that calls for the contractor, Jensen Construction, of Ankeny, Iowa, to lay two 150-ft. (45.7 m) long segments next to each other on the ground and bolt them there before picking them up and hanging them, Evans said.

“It is much more stable if you've already put in the diaphragms and cross frames,” he said. “The challenge of that is the sheer weight. Also, when you pick something that heavy, you can't be too far from the location where you are going to hang it. There is a limited time frame to get in there and get them in the air. We're talking about one pick a night over I-35. They only have to close it five times to get those girders up over the Interstate. The girders are 9-feet deep. That's a lot of bolts you have to install. When you go to put those in, it helps if you can bolt some of that up while not over traffic. You bolt the cross frames on the ground, and the splices and girders you bolt in the air. We're trying to not bolt over the interstate.”

“Based on what the contractor has said, he's going to need erection towers and he's going to need those really close to the Interstate,” Evans said. “There is what is called a zone of intrusion. A large truck could come through and you have to protect those erection or shoring towers from an impact. How close can you put these towers next to the roadway? He's going to definitely need additional shoring towers, temporary places to put the girders, as you go you have to have extra place to put the girders so you can bolt up.”

Work to remove the existing bridge began April 1. Traffic, which numbers only about 1,600 vehicles daily, has been shifted inward and the project is expected to be completed in the fall.

“It will be a challenge,” Evans said. “As far as I know, this is probably the longest span bridge not over water in Iowa.”