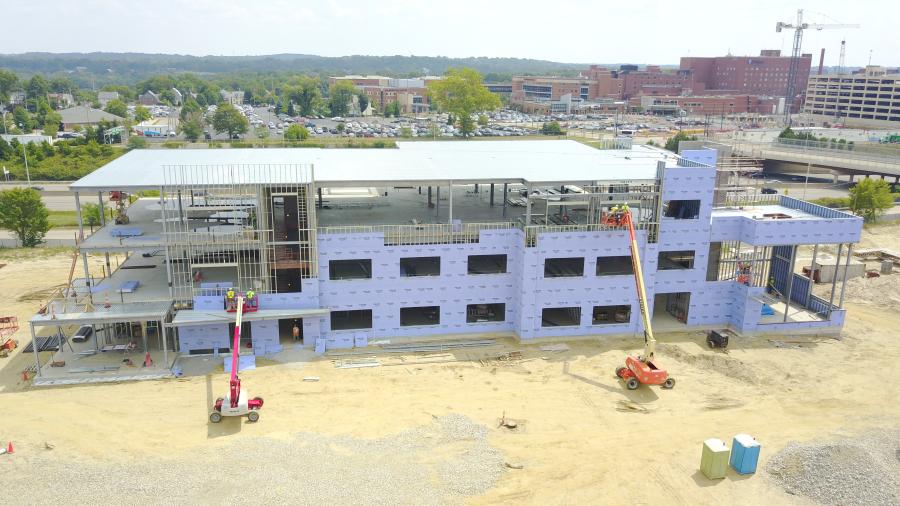 Crews hired by the Welty Building Company Ltd. (WBC) are months away from completing the construction of Stark State College's (SSC) new $15.7 million Akron location. The facility is a 68,414-square-foot, three-storey structure that is expected to serve up to 5,000 students within the next five years.

The work began on Dec. 12, 2016 on a 11-acre site and it should be ready for occupation in May. The building was designed by FMD Architects in Fairlawn, Ohio.

“Stark State College has been serving students from Summit County at its main campus in North Canton since its inception in 1960,” said Robyn Steinmetz, SSC's director of marketing and communications. “As the Summit population has continued to increase at Stark State, city and county officials have been asking for a community college presence closer to home.

“Stark State College Akron is the answer to the many requests we have received for affordable, accessible, quality, transferable education that a community college can offer,” she added. “The new facility will allow us to continue serving Summit County residents in a more convenient location to meet their needs.”

SSC offers students two-year associate degrees and certificate programs in a variety fields, and when the new location opens, students will have the option of attending classes at either the new Perkins St. location or at the College's other current Summit County location on White Pond Drive in a leased space.

Many of the students at SSC receive degrees to work in construction and other industry-related subcontracting trades.

The new location is a mix of traditional and modern architecture — primarily a two-tone brick clad structure and a glass-clad section with grey metal panels on the southwest end. The building will have 21 classrooms, computer labs, offices for administration and teaching staff and a bookstore. The third floor has been set aside as an open space pending future program expansion to meet the needs of the Akron community.

The basement houses two classrooms, a restroom, a shipping/receiving area with loading dock, a mechanical room and space for future classrooms and labs. The first storey contains the book store and a sizeable glazed-in common area that highlights natural light to create a pleasant environment, and this theme is echoed on the second floor, which features panoramic views of downtown Akron. A 600-spot parking lot will be located in front of the main entrance adjacent to union Street, and a cement pad is being placed next to the loading dock to permit the college's Welding on Wheels mobile welding lab to visit the location.

“The atmosphere of this new facility is very modern yet inviting and really state-of-the-art in terms of classrooms,” said Steinmetz. “There are many soft seating areas, study nooks and comfortable spaces that will allow students to feel at home while they are waiting for their next class or getting together to work on group projects.”

Rich Rosenberger, construction coordinator of SSC, is pleased with the progress of the work.

“We've held weekly job meetings to discuss progress,” he said. “The building was designed using many sustainable features to reduce energy and fuel consumption. 100 percent of the lighting is LED and connected to motion and daylight sensors so that they are only on when needed.”

The grounds provide sufficient space for the construction of two or three additional buildings to accommodate future growth, and SSC has also purchased 2.12 acres of land off of East Market Street to establish an entrance.

“We are just thrilled to be a part of the downtown Akron landscape,” said Steinmetz. “As we settle in, we will really be paying attention to the needs of the students, area Akron businesses and the community. Any future expansion will really depend on program offerings to meet those needs.”

Welty Building Company, which is managing the construction, was able to overcome 35 lost work days to keep on schedule for the spring opening. 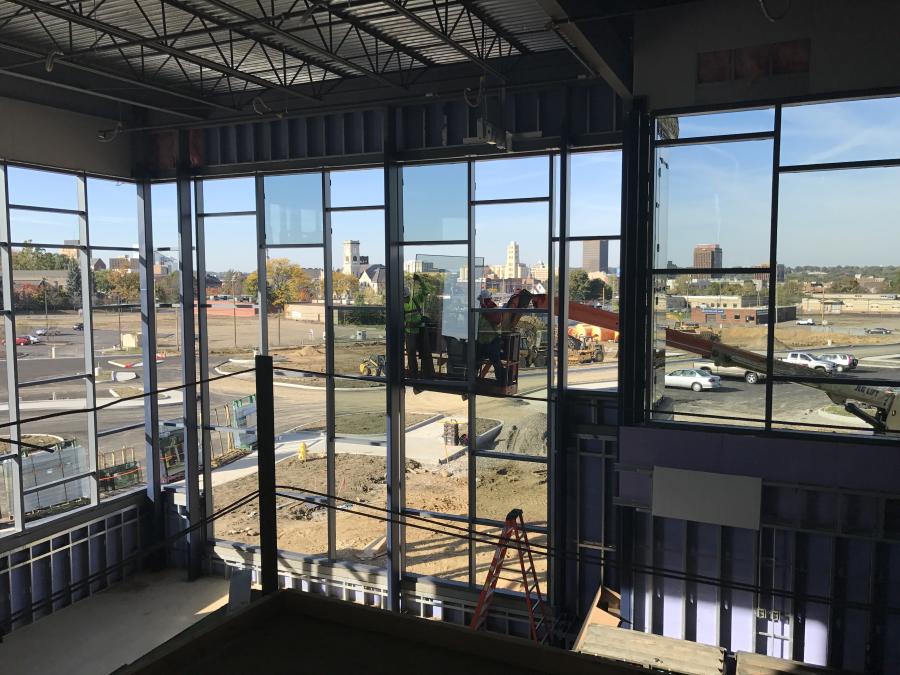 The majority of the asphalt work has been completed for the parking lot, and as noted, this will be completed in the spring.

Welty has brought in several general contractors and subcontractors for the project, some that have worked with company in the past. They include: Ellet Sign for pylon sign and signage, Bob Bennett Construction for site work, Xtreme Elements for concrete, Carron Asphalt Paving for concrete work, The Selinsky Force for structural steel, Stanley Miller Construction for masonry, Oppenheim Construction for carpentry, Boak & Sons for roofing, Fox Enterprises for metal panels, TeamOne for glass and flazing, Kone for elevators, Comunale for fire suppression, RT Hampton for HVAC/plumbing and Enheit Electric for electrical installation.

A major challenge was the sandstone that had to be removed to create the foundation.

“This impeded us more than we anticipated,” said Dwight Coleman, Welty's project manager. “We didn't actually start on the footers and foundations until the beginning of March. Between December and March, we did a lot of earth work and excavated the foundation. We also lost 35 days of the critical path to weather, but we're still ahead of schedule. We persevered through a lot of challenges.”

The building's foundation is deep and it is home to an open-ended basement.

Coleman has been in construction for 45 years and his varied experiences prepared for this project.

“This is one of the toughest because of the rock and the lost days,” he said. “We had a lot to make up, but we have good contractors that work with us and want the project to be a success.”

The work is being done via day shifts — Monday to Friday — with around 46 people on site daily. The delays and lost days required the original construction plan to be scrapped.

“We had some things out of sequence and had to keep rolling on,” said Coleman, “and everyone jumped through the hoops and worked harder. I have a very good superintendent, Nick Cooper, who conceived and worked things out with the contractors and kept us going.”

The interior of the building was topped out on June 28 and in early December substantially enclosed the structure, which included the placing of the brick and installation of the 75 windows.

“That was Nick's responsibility,” said Coleman, “and he's very thoughtful when it comes to coordinating multiple tasks and ensuring a smooth working environment. He always made sure that the work sequence was correct and that every contractor had the opportunity to complete their work before it was covered up. We work based on a GPM schedule, and we do full planning.”

Serious spring and summer rains hampered the work, resulting in lost days, which stopped construction completely or limited some actions and delayed the work of others. Thus there were times when only foundation and steel work could take place.

“Later on, as we got the building enclosed and started working in it,” said Coleman, “we were affected by rain, snow, and cold. This affected the exterior workers, but not the critical path that was based on the interior work.”

Coleman said that SSC understood the challenges being encountered and the delays that occurred.

Steel and concrete manufacturers were nearby, as were other suppliers, and the site provided plenty of space for offices, materials, and equipment. The amounts of materials being removed and brought in are still being tabulated.

Recycling is critical to Welty operations.

“We re-used all that we could,” said Coleman, “some of it as fill, and what could not be used here, we're using on other jobs. It's more economical for everybody to do that.”

For the interior work, boom lifts and one and two-manlifts were used, while the exterior work had a variety of scissor and manlifts, all-terrain vehicles, large trucks, excavators, dozers, and rock hammers.

The removal of the sandstone took its toll on the equipment.

“I don't know how many times we had hammers taken back to the shop to be repaired,” said Coleman. “Sometimes we had three hammers out there and none of them would work. We had to go down 16 feet to dig trenches and the foundation, pounding the rock – sometimes spending two days pounding in areas 10 by 20 feet. It was hard rock and really tough.”