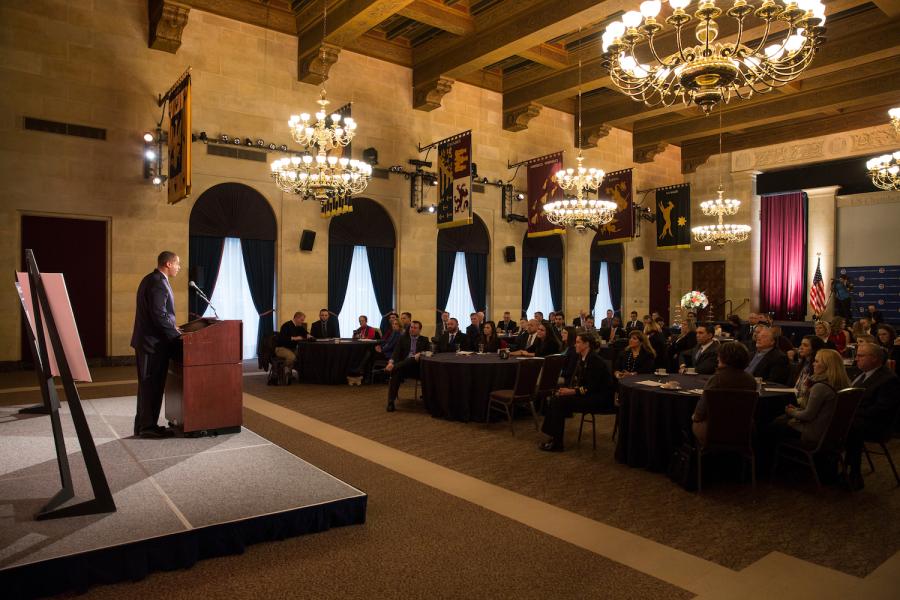 Assistant Secretary of the U.S. Navy Franklin Parker addresses the audience gathered for the Transition Trucking: Driving for Excellence recognition program at the U.S. Chamber of Commerce Hall of Flags. Two of the three finalists for the top rookie military driver award served in the U.S. Navy.

A decorated former crew chief with the Blue Angels, who now drives for Werner Enterprises, was awarded the top honor in the “Transition Trucking: Driving for Excellence” recognition program, during a ceremony Friday at the U.S. Chamber of Commerce Foundation in Washington, D.C.

Davidson was one of three award finalists. The other two were Russell Hardy, a driver with Trimac Transportation who served in the Navy and Army during his 20-year military career; and Kevin Scott, a driver with TMC Transportation, who served as a sergeant and 15 Tango Blackhawk helicopter mechanic and crew chief. Hardy and Scott each received a $10,000 award check.

Davidson served in the U.S. Navy for 16 years, including his work as a jet engine mechanic crew chief with the U.S. Navy Flight Demonstration Squadron, a coveted post for which he was recommended by Vice Admiral Thomas M. Buckee, commander of the U.S. Third Fleet from October 2000 to 2003.

“I am really impressed with my new Kenworth T680,” said Davidson, who resides in Pensacola, Fla. “My Uncle Mark drove semi trucks for 30 years, up to the day he passed away. If he were alive today, I know he would still be driving, and he would be envious of me driving for Werner Enterprises, especially in this T680.”

From the time he was a little boy riding a tractor on his grandfather's farm, Davidson said he has always had a fascination with big and powerful machines. It is part of the reason he worked on the engines of McDonnell Douglas F/A-18 Hornets as a jet engine mechanic crew chief for the Blue Angels before transitioning to civilian life.

Davidson has had prior experience with the T680. Before he received the award, he drove a 2015 Kenworth T680, which he nicknamed “Big Betsy.” “The T680, in my opinion, is the best of all the trucks on the road today,” Davidson said. “I appreciate the smooth quiet ride.” With the truck he received at Friday's ceremony, Davidson has decided to eventually become an independent contractor.

“For Kenworth to give its flagship model to help this very deserving former Navy crew chief get a running start to his career demonstrates the company's commitment to helping service members make these transitions,” said Hiring Our Heroes' Eric Eversole. “When transitioning service members saw the T680 displayed at Hiring Our Heroes job fairs held across the country over the last year, they told us they saw the truck as a clear message of support for making the transition to trucking. I think it got many service members to think about the potential of a trucking career.”

Brad Bentley, FASTPORT president, said the three finalists were determined by tallying scores from a Selection Committee. Davidson was chosen by visitors to the Transition Trucking website (www.transitiontrucking.org), where they could view a video of each driver and vote their choice for the top military veteran rookie driver. Davidson received the highest tally – more than 259,000 votes.

"The Transition Trucking: Driving For Excellence contest finalists embodied the attributes any company would want to have,” Bentley said. “These military service members who transitioned into careers as professional drivers are dependable, hard-working, motivated, ethical and disciplined team players.”

Jason Skoog, Kenworth's assistant general manager for sales and marketing, agreed. “Every year, hundreds of thousands of highly-skilled veterans like Troy, Russell Hardy and Kevin Scott transition from the military into civilian life,” Skoog added. “It appears we succeeded in getting transitioning service members to look at a career in the trucking industry. And we hope it will inspire those in the trucking industry with hiring needs to take a closer look at the wealth of talent these service members can offer.

“While all three finalists were deserving, I certainly can understand why Troy was chosen by the public as the top military veteran rookie driver,” Skoog said. “He represents all of the best qualities in so many of the transitioning service members we met at Hiring Our Heroes job fairs – a commitment to excellence, sacrifice, duty and honor. As much as Troy may have liked the Kenworth T680 that Werner assigned to him, we think he's going to be even more pleased with his very own T680.”