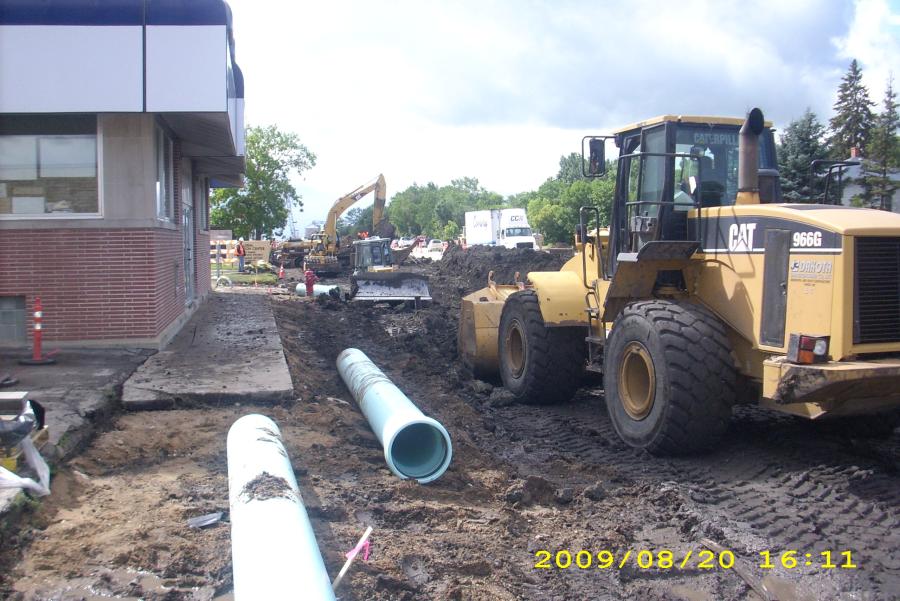 Neither spring flooding nor early winter weather in October could cause refinishing of an 11-block section of Main Avenue in West Fargo, N.D., to miss its fall completion deadline.

Work on the $8.6 million project, between Sixth Street West, near the Sheyenne River Crossing, and Fifth Street East, included reconstruction of the road surface, turning frontage roads into parking areas and constructing a bridge over the Sheyenne River; construction of the bridge, however, was later postponed. Funding was obtained from the state of North Dakota and the city of West Fargo, which contributed $2.4 million to the total cost; the approximate split is 72 percent federal, 7 percent state and 21 percent local.

Early spring flooding that caused the Sheyenne River to overflow also caused a delay in the start of the project. Work for the season began in mid-April; seasonal construction normally begins several weeks earlier.

Although the pavement was deteriorating, safety was the overall reason for the project. One of the crucial areas to undertake in the project was the numerous access points of the frontage road that runs adjacent to Main Avenue, and with them, the increased potential for a crash, explained Kevin Gorder, assistant district engineer with the Fargo District Office of the North Dakota Department of Transportation. To reduce access points, the frontage roads were removed and turned into parking turnouts. This technique of adding parking areas is not new to the Department of Transportation, but it is a first for the Fargo area, Gorder said.

Another unique feature, Gorder explained, is there is no raised median so vehicles can enter parking areas easily from eastbound and westbound directions.

As long as the project was being done, designers looked at not only things to make the area safer, but also ways to create a nice project to fit inside the right of way, explained Gorder.

The 11-block stretch of roadway services the old downtown area of West Fargo and was last paved in the 1970s. Since then, maintenance of chip seals and overlays have been done, but at some point the pavement is too old and something more needs to be done, Gorder explained.

The actual roadway was not widened, it remains a five-lane section, however, some lanes were narrowed down to accommodate turnouts and non-vehicle traffic, Gorder said. The existing roadway was reclaimed, creating 17,000 cu. yds. (12,997 cu m) of salvaged base course, which was reused in the base course, Gorder said. During the project, crews actually removed 51,000 tons (46,266 t) of materials from the roadway, curb and gutter and sidewalks. Crews created a 12-in. (30.4 cm) base that was topped with 10 in. (25.4 cm) of concrete, which equals about 27,000 sq. yd. (22,575 sq m) of concrete for the mainlines. Previously the base was 8 in. (20.3 cm) deep and was topped with 9 in. (22.9 cm) of concrete. The new deeper depth is expected to hold up better and last longer, Gorder said.

Dakota Underground Company’s owner Jeff Johnson explained that as a company it is not difficult to keep up with the various aspects of the project. “I think our ability to do that helps us. We can schedule our own forces, so if we are behind on an aspect of the project and need to speed things up, we can bring in our own forces, rather than relying on a subcontractor. It is easier to schedule around ourselves.

“We have a lot of good employees who handle certain jobs for us, but if we need them somewhere else we can move them, thus pooling our resources to tackle what we need done at any given time,” Johnson added.

For the Main Avenue project, Dakota Underground started off with the removal of existing pavement and then handled all the underground piping and dirt, gravel and subgrade work, the paving and about 50 percent of the sidewalk work. The remaining sidewalk work was subbed out because of the weather, causing Dakota Underground to require some help to finish the project before freeze up.

For grading and gravel subgrade work, crews used a Cat D6t LGP for low ground pressure, which was an accugrade ready machine with a Trimble GPS system to do the subgrade work and gravel prep, Johnson explained. “We’re just cracking into all the abilities the GPS offers. We have used GPS for several years; it has been a great tool for us and it continues to get better, as we learn more of its capabilities.”

After the subgrade was complete, Cat 140 motor-graders were used to help blade out the material. A CMITR225b trimmer was used to trim the gravel base to the perfect grade for paving. The bulk of the concrete paving was done with a GOMACO GP2600 paver, while a CMISF250 was used for the smaller paving. A GOMACO GT3200 was used for most of the curb and gutter work.

There were times when all the machinery was on the site at one time, because the project was broken into various stages, Johnson said. Pavement was removed on one stage so the underground work could begin. Pavement removal was then started on the next phase, and so forth. “There were times when we were doing removal, underground, dirt and base work and paving,” Johnson said. “We were working on various phases at one time so each phase was ready for the next crew to come in and work. Everything was happening simultaneously.”

Tight confines of the project, however, were not the only challenge of the project. Challenging spring and fall weather caused the Department of Transportation to take a closer look at a bridge that was to be part of the 2009 portion of the project.

A combination of factors caused the cofferdam to shift, therefore the flume could not redirect the Sheyenne River, as originally planned and a box culvert could not be constructed.

Early in the project, box culverts were included in the plan. The culverts were to consist of two 12-ft. (3.66 m) wide concrete openings that would allow the Sheyenne River to flow underneath the Main Avenue roadway. However, the Department of Transportation rescheduled construction of a bridge over the Sheyenne River. “Many factors contributed to our decision not to construct a structure as part of this year’s project,” Gorder explained. “Some factors considered were: estimated increased costs, local business and impacts to West Fargo traffic, construction continuing into mid-winter, concerns with snow and ice control on the frontage road and safety of the traveling public.”

The revised plans now have the project ending just east of the Sheyenne River, with no box culvert or bridge construction taking place in 2009. Engineers are now exploring other options, including the construction of a bridge instead of a box culvert.

This portion of the project will now be bid out for inclusion in a future phase of the project. “We’re trying to include box culverts, which are now scheduled for 2015, giving us time to step back and take a good look at things before proceeding,” Gorder said. “The existing bridge is the temporary bridge that was left in place until we decide what to do with the bypass. The bridge is considered structurally deficient because there is an issue with the rocker arms and supports, so we are watching them. We know we have to work on the bridge at some point.”

However, for now, the ND/DOT is monitoring the situation and the bridge is doing fine, “If something should change, we can get in and do something different. We had to make a decision in August, and given the October weather we had, we would have struggled to get something completed before freeze up. We had a rough, snowy and cold October and a wonderful November that helped us complete things,” said Gorder.

The majority of work on the West Fargo Main Avenue project was completed by mid-November, so east and westbound lanes could be completely opened to traffic. Some final touches, such as striping, signal work, seeding and bike path installation were still being completed later in the month.

This project was the first of a three-phase, seven-year plan to reconstruct the Main Avenue corridor in West Fargo. In 2012 crews will pick up work on the east side of where construction from 2004 was completed. The 2015 portion will start at the Sheyenne River and continue east to Interstate 94; creating about 4 mi. (6.4 km) of reconstruction when the project is totally completed.