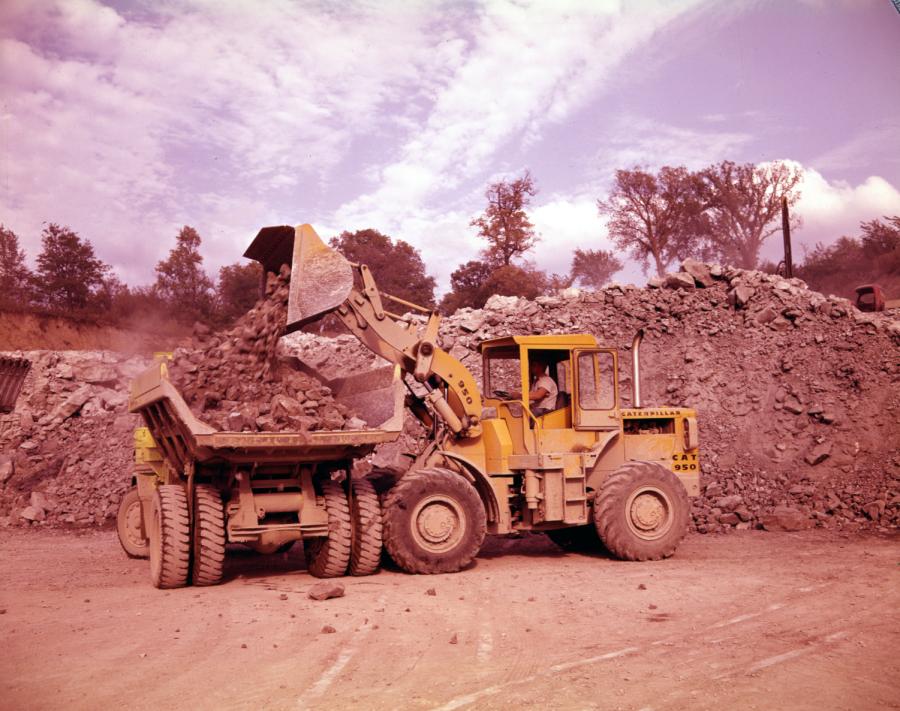 We Build Georgia photo. The 1960s was a decade of rapid growth for Caterpillar.

Enter the modern wheel loader — the industry's most versatile workhorse. Its applications include material handling, site prep and road projects, among many others. Looking back, it's difficult to imagine how those in the industry managed without them. Thankfully, today's contractors have several manufacturers, sizes and add-ons to choose from, all to make their work a whole lot easier. And it all started with the advent of new farm tractors, diesel engines and bucket attachments.

There were several early prototypes of the wheel loader in the 1920s, which were essentially agricultural tractors. These machines included a loader bucket, which was fastened on with wire rope through a clutch-operated winch, and then dumped by gravity through a trip release mechanism. E. Boydell & Co., in Manchester, England, developed small wheel loaders in the 1930s by fastening buckets onto tractors, and invented the first bucket-mounted tractor by mounting a Muir-Hill loader cable-controlled bucket on a 28 horsepower Fordson tractor.

World War II resulted in a surge of technology across multiple sectors, including construction equipment.

In 1953, Mixermobile Manufacturers in Portland, Ore., introduced the articulated frame — the Scoopmobile Model LD-5. This advancement gave the operator more control and maneuverability of not only the wheel loader, but the bucket as well.

The following year, the diesel engine tractor and a timely merger resulted in the first modern wheel loader with an attachment bracket.

Volvo acquired AB Bolinder-Munktell, and through this partnership BM Volvo developed the first diesel engine tractor in 1952. In 1954, Volvo adapted the engine as well as transmission components and a new range of tractors to create the world's first wheel loader with attachment bracket, the H-10. It was a rear-wheel steer machine based on a reversed tractor, powered by a three-cylinder diesel engine with an output of 35 hp and a five-speed mechanical gearbox, according to the manufacturer.

International Harvester Hough Division entered the market in 1964 with the HD 400, which was its first articulated wheel loader.

In 1965 Komatsu began production of its line of wheel loaders.

In the 1970s, larger wheel loaders with articulated steering, a new type of lift arm system and comfortable cabs were available from Volvo. Other manufacturers also increased their bucket's capacities to 20 cu. yds. (15.3 cu m), including Caterpillar, Komatsu and LeTourneau. JCB launched its 400 series wheel loaders in 1973.

Today, wheel loaders are advanced, diverse and versatile. New electrical wheel loaders work much the same way as their diesel and gasoline-powered counterparts do. Attachment options such as forks, grapples and various bucket options mean that these machines work for any number of applications. Hybrid models also have become popular due to new legislation and cost savings for contractors. As wheel loader models continue to advance, contractors will continue to use them as the workhorses of their fleets.